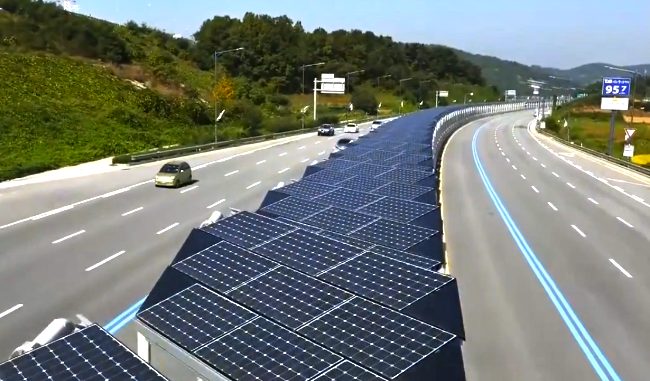 Until it’s actually possible to pave our parking lots and roads in solar panels, here’s a promising compromise from South Korea. In between the cities of Daejeon to Sejong, there’s a 20-mile bike lane that’s covered by an impressive solar array.

The overhead solar panels not only generate renewable power but also provide shade and cover from rain for the bicyclists.

A bike lane that’s also a solar farm is a wonderful concept, but does it have to be smack in the middle of a busy highway? Some have pointed out that cyclists are exposed to vehicular fumes and emissions of the fast-moving cars and trucks zipping down the road. 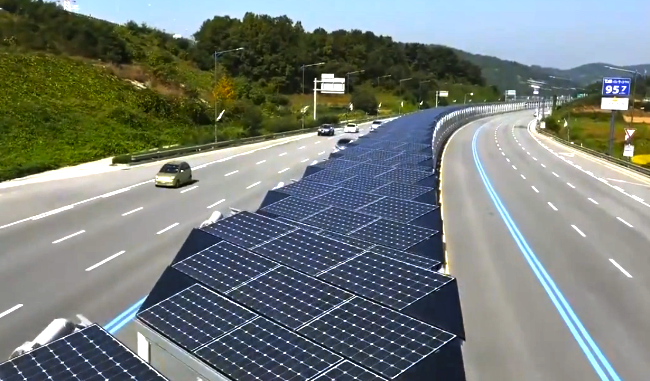 And although bikers are protected by a barrier, a BBC article once observed that Seoul drivers are “notorious for ignoring any traffic rules, especially red lights, and will drive across intersections over red lights.”

Still, promoting emission-free transportation is especially important for a country that hasn’t seemed to embrace biking as a means of commuting.

According to the Ministry of Security and Public Administration, while seven out of 10 Koreans own a bicycle and more than half of the population cycle at least once a month, most Koreans consider leisure as the primary purpose of cycling, not transportation.

As the Korean Herald reported, cycling apparently accounts for just 2.5 percent of transportation in the country, whereas in the Netherlands it’s around 43 percent, and in nearby Japan it’s 25 percent.

Biking would also reduce traffic congestion, which can be pretty bad especially in the country’s capital of Seoul where one out of three citizens has a car.

Despite what critics have said, it looks like many Korean bikers are already using the lane to get from A to B. If you look closely at the footage below (captured by a drone no less), you’ll see cyclists cruising down the path as traffic on each side whizzes by.

We wonder if something like this would work in the U.S.?

10 Mysterious Geoglyphs From the Ancient World Previous post
Dying CIA Agent Claims He Killed Marilyn Monroe: 'I Did It For America!' Next post