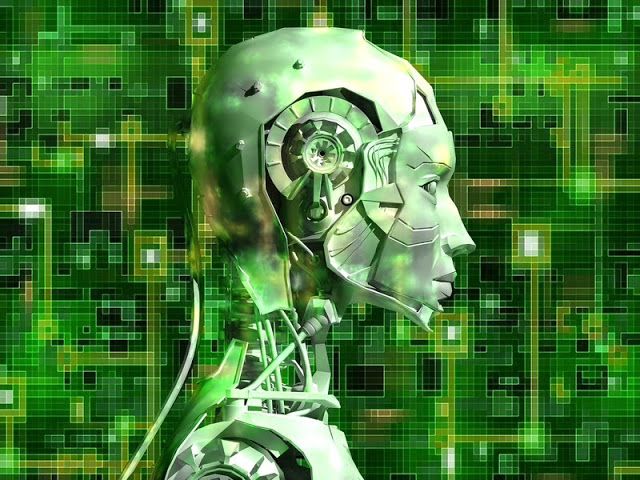 The Synthetic Reality Agenda — From Artificial Intelligence to the Manhattan Project

It is not by accident or organic, ‘grassroots’ trend that numerous films are coming focused on artificial intelligence and the transhumanist takeover. From H.G. Wells’ tales of genetic chimaeras in The Island of Dr. Moreau to Sixth Day with Schwarzenegger, to A.I. films like Chappie, the predictive programming preparations are rolling out.

My recent research has focused on the Manhattan Project, and like the MK ULTRA programs, Manhattan had a much wider application than is commonly known. In fact, MK ULTRA and Manhattan are related through the connect of biometrics and bio-warfare.

As MK ULTRA faded away, the program was renamed MK SEARCH and transferred to Fort Detrick, one of the U.S. Militarys biological weapons-focused bases. And with both MK SEARCH and Manhattan programs, we find an overarching ideology of transhumanism that has its origins much earlier in the alchemists of the ancient world.

The inklings that we can gather about this overall, long-term project appear to be geared towards biologically engineering humans to withstand the coming onslaught of various alterations in the entire biosphere.

In order to transition to the synthetic overlay that will integrate SmartCities, the Internet of Things, human bio-engineering, cloning, biometrics, genetic programming and environmental engineering is now an open plan in numerous transhumanist lectures and publications.

Yet in order to reach this phase, experimentation is necessary, and what better means to that end than experimenting on populations en masse.

We have already seen that the technocratic establishment has no qualms about testing on unwitting subjects, so covert experimentation on mass populations is not without precedent — from MK ULTRA to covert chemical spraying. For example, the U.S. government sprayed St. Louis in a radiation experiment under the guise of prepping for a Russian attack.

Official Declassified Documents: Poisonous Chemtrails Were Sprayed Onto the US Population

That this particular experiment (among numerous) involved radiation was no coincidence. The 20th Century appears to have been the ‘radiation century’, suggesting the hypothesis by researchers like Sofia Smallstorm to be correct (please see the video From Chemtrails to Pseudo-Life at the bottom of this article).

Smallstorm argues the goal of the 20th century’s experiments was to overwrite the existing biosphere with a new, synthetic overlay, or humanity 2.0. Humanity Plus, the new homo evolutis, would be an androgynous being capable of technocratic control beneath the All-Seeing Eye of panoptic surveillance.

Children will be grown in test tubes, according to the Brave New World plans of Huxley, and sex would become meaningless. Offspring allowed to subsist will be genderless automatons, made for slave-like subjugation and toil. Wells described this in his Time Machine, with the Morlocks and Eloi.

From Bertrand Russell to Dr. Edward Teller, the plan that is blossoming in our day is showing itself to be a unified plan that spans the last century in particular, as the century of the ‘final revolution’ (in Russell’s words), where scientific process would reveal the secrets to technological imperialism.

Russell was a proponent of both “scientific society” and a “single supreme world government”, while Teller himself was not only a key figure in the development of the hydrogen bomb and the Manhattan Project, but also the father of aerosol spraying and atmospheric geoengineering. [learn more here]

This period is thus concurrent with the alchemical atomic and nuclear tests done igniting bombs in the atmosphere, beginning at the Trinity Site in New Mexico.

“From 1945 to 1963 the U.S.A. conducted an extensive campaign of atmospheric nuclear tests, grouped into roughly 20 test ‘series’. After 1963 when the Limited Test Ban Treaty was signed testing for the U.S., Soviet Union, and Great Britain moved underground. France continued atmospheric testing until 1974 and China did so until 1980. This page focuses mainly on U.S. testing because those documents are most readily available.” 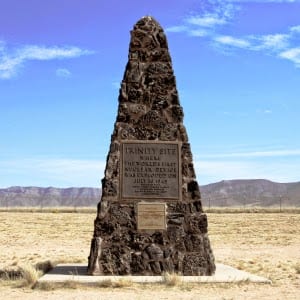 Researcher Michael A. Hoffman opines on the alchemical significance of these tests at the ‘Trinity’ site and its scientistic underpinnings:

“The reason science is a bad master and a dangerous servant and ought not to be worshipped, is that science is not objective. Science is fundamentally about the uses of measurement. What does not fit the yardstick of the scientist is discarded. Scientific determinism has repeatedly excluded some data from its measurement and fudged other data, such as Piltdown Man, in order to support the self-fulfilling nature of its own agenda be it Darwinism, or “cut, burn and poison” methods of cancer “treatment….

“This process is observed in the Renaissance, which was informed by a secret gnosis whose core dogma was momentous change in man’s attitude toward nature: the alleged ‘perfection’ of a “flawed” Creation by the invention of the ‘omnipotent’ human brain. Thus it was the Renaissance magical tradition that gave birth to the monstrous world of machines, industrial pollution, ugliness and the modern way of death we have come to term the ‘rat race’ (Secret Societies and Psychological Warfare, pg. 49)

And in regard to the esoteric significance of the site itself as a ‘rite’ to mock the Trinity:

“The creation and destruction of primordial matter [prima materia in Aristotelianism ~ Jay] at the White Head (Ancient of Days) at White Sands, New Mexico, at the Trinity Site. The Trinity Site itself is located at the beginning of an ancient western road known in Old Mexico as the jornada del muerto (The Journey of Death)… Fabled alchemy had at least three goals to accomplish before the complete decay of matter, the total breakdown we are witnessing today, was fulfilled. These are:

1. Creation and Destruction of Primordial Matter
2. The Killing of the Divine King
3. The Bringing of Prima Materia to Prima Terra

The connection here to the overall stragems of the technocratic transhumanists and the Manhattan Project can now be elucidated, and for those skeptical of the connection of ritual magicians and occultists to modern science, consider the person of Jack Parsons, the father of the jet propulsion engine, who was an avid follower of Crowley’s OTO.

The ouroboros signified here is the cycle of temporal and material existence being transcended to achieve apotheosis through techne.

For this great work to be achieved, much experimentation was needed – from the human psyche, to the depths of subatomic particles. I wrote about the splitting of the atom as a kind of ritual sacrifice in my Knowledge Without Wisdom essay as follows:

“The false faith in man’s reason and scientific methodology must also be accompanied by a false faith in man and his own progress. This is not to say that man cannot use his reason to probe the atom or control the electromagnetic spectrum: He can and does.

“But why does he do this? In a universe desacralized and emptied of any divine telos, the only logical conclusion is the destruction of what is, and thus man’s quest to dethrone God erupts into an orgiastic fanaticism to annihilate prima materia.

“The universe is mirrored in the atom, and so the atom must be divided, because the universe must be destroyed, and this is because man follows Satan, who is the adversary that divides. Satan is the thief that comes to steal, kill and destroy (John 10:10).

“To divide is to conquer, and man’s quest to ritually sacrifice the atom like Abraham divided the carcasses (Gen. 15:10) is also much like Phaethon. Phaethon is the mortal son of Apollo who tried to drive his chariot into the sun. It is a myth modern man should consider.  In Plato’s esoteric masterpiece The Timaeus, Solon speaks of Phaethon:

“There have been, and will be again, many destructions of mankind arising out of many causes; the greatest have been brought about by the agencies of fire and water, and other lesser ones by innumerable other causes.

“There is a story that even you [Greeks] have preserved, that once upon a time, Phaethon, the son of Helios, having yoked the steeds in his father’s chariot, because he was not able to drive them in the path of his father, burnt up all that was upon the earth, and was himself destroyed by a thunderbolt.

“Now this has the form of a myth, but really signifies a declination of the bodies moving in the heavens around the earth, and a great conflagration of things upon the earth, which recurs after long intervals.”

Fast forward to the scandal of the SV 40 jjab and Dr. Jonas Salk and Dr. Maurice Hilleman, and we have an “accident” in which the simian virus in the inoculations resulted in cancer.

According to Edward T. Haslam in his Dr. Mary’s Monkey, the totality of the Manhattan project was largely concerned with radiation, with the technology of inoculation having intimate connections to the military industrial establishment.

When we consider the central place of planetary bioengineering and biometrics (replacing the older ‘eugenics‘), the new plan has morphed into dysgenics operations through covert soft kill methodologies. The SV 40 jjab is believed by some to be, not a cure, but a covert experiment into the results of inoculation technology for population control.

While this may seem far-fetched to many, Dr. Jonas Salk himself wrote of the need for vast population reduction in his 1972 book Man Unfolding and the ability of the establishment to accomplish these goals through technocratic means. See the below video, where in the CBC documentary, Dr. Hilleman openly admits the SV 40 infected the populace: