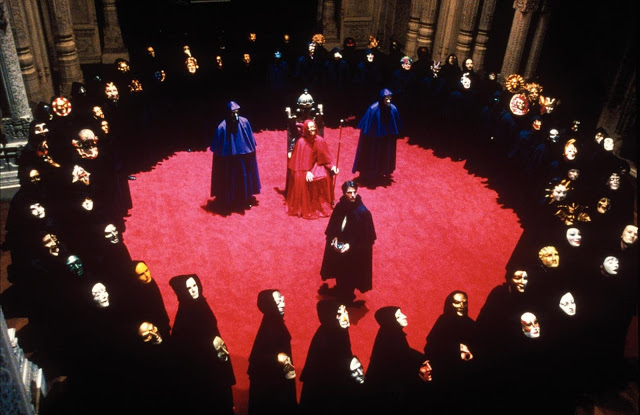 The Ruling Council to all Secret Societies: The Illuminati

The Illuminati serves as ruling council to all secret societies

Its roots go back to:

British Prime Minister Benjamin Disraeli, who “handled” mafia-founder and 33rd Degree Mason Guiseppe Mazzini, alluded to the Illuminati in a speech before the House of Commons in 1856 warning: 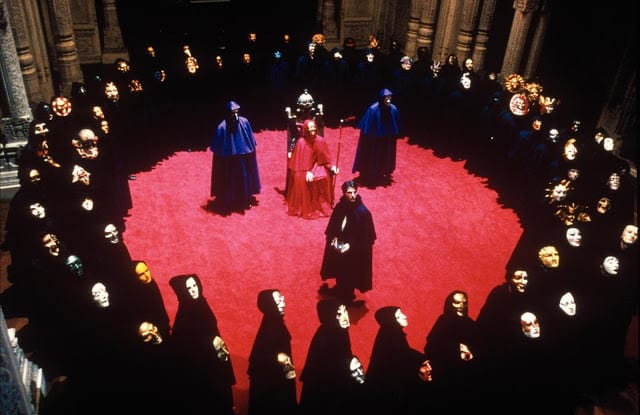 The Illuminati is to these secret societies what the Bank of International Settlements is to the Eight Families central bankers. And their constituencies are exactly the same.

The forerunners of the Freemasons – the Knights Templar – founded the concept of banking and created a bond market as a means to control European nobles through war debts.

By the 13th century the Templars had used their looted Crusades gold to buy 9,000 castles throughout Europe and ran an empire stretching from Copenhagen to Damascus.

Templars’ bank branches popped up everywhere, backed by their ill-gotten gold. They charged up to 60% interest on loans, launched the concept of trust accounts and introduced a credit card system for Holy Land pilgrims.

They acted as tax collectors, though themselves exempted by Roman authorities, and built the great cathedrals of Europe, having also found instructions regarding secret building techniques alongside the gold they pilfered beneath Solomon’s Temple.

The stained glass used in the cathedrals resulted from a secret Gothic technique known by few. One who had perfected this art was Omar Khayvam, a good friend of Assassin founder Hasan bin Sabah. [14]

The Templars controlled a huge fleet of ships and their own naval fleet based at the French Atlantic Port of La Rochelle. They were especially cozy with the royals of England. They purchased the island of Cyprus from Richard the Lion Heart, but were later overrun by the Turks.

On Friday October 13, 1307 King Philip IV of France joined forces with Pope Clement V and began rounding up Templars on charges ranging from necromancy to the use of black magic. Friday the 13th would from that day forward carry negative connotations.

The Priory of Sion came into public view in July 1956. A 1981 notice in the French press listed 121 dignitaries as Priory members. All were bankers, royalty or members of the international political jet set.

Pierre Plantard was listed as Grand Master. Plantard is a direct descendent, through King Dagobert II, of the Merovingan Kings.

Plantard, who owns property in the Rennes-le-Chateau area of southern France where the Priory of Sion is based, has stated that the order has in its possession lost treasure recovered from beneath Solomon’s Temple and that it will be returned to Israel when the time is right. He also stated that in the near future monarchy would be restored to France and other nations.

The Templars claim to possess secret knowledge that Jesus Christ married Mary Magdalene, fathered children to launch the Merovingan bloodline and was the son of Joseph of Arimathea. [15]

Joseph was the son of King Solomon. Solomon’s Temple is the model for Masonic Temples, which occur without fail in every town of any size in America. It was a place of ill repute where fornicating, drunkenness and human sacrifice were the norm.

The Anunnaki are the reptilian/aliens revealed by the Sumerian clay tablets – the oldest written accounts of humankind known.

The Crusader Knights Templar looted their huge store of gold and numerous sacred artifacts from beneath the Temple. King Solomon was the son of King David- who during his 1015 BC reign massacred thousands of people.

Icke calls King David “a butcher” and asserts that the king wrote a good chunk of the Bible. His son Solomon killed his own brother to become King. He advised Egyptian Pharaoh Shiskak I, marrying his daughter.

Solomon studied at Akhenaton’s Egyptian Mystery Schools, where mind control was rampant. The Grand Lodge of Cairo spawned a network of secret societies including Assassins, Cabalists, Freemasons and the Afghan Roshaniya. Those who pass through to the highest levels become Illuminati.

Icke claims the Canaanite Brotherhood was headed by the god/king Melchizedek, who may have been an Anunnaki.

The King focused on a Hebrew understanding of the Ancient Mysteries. The Order of Melchizedek became the secret society associated with the Cabala.

King Solomon developed his vast wisdom studying the Sumerian Tables of Destiny which Abraham had possessed. Abraham may have also been of Anunnaki origin.

Both he and Melchizedek had been tutored by the Sumerian Brotherhood of the Snake, whose name may have something to do with the Biblical creation story, where Adam and Eve are tempted from a bountiful garden of Eden (a hunting and gathering existence?) into a world of “sin and servitude” by a snake.

When the Bible says that the first couple ate the forbidden fruit, could it mean that Eve was impregnated by the snake – an Anunnaki serpent (the Nephilim of the Book of Genesis) – thus damning all Adamus to a life of toil under serpent king bloodline control?

The basis of the Sumerian Tables of Destiny which Abraham possessed became known as Ha Qabala, Hebrew for “light and knowledge”.

Those who understood these cryptic secrets, said to be encoded throughout the Old Testament, are referred to deferentially as Ram.

The phrase is used in Celtic, Buddhist and Hindu spiritual circles as well. The Knights Templar brought Cabbalistic knowledge to Europe when they returned from their Middle East Crusade adventures. [16]

The Knights created the Prieure de Sion on Mt. Zion near Jerusalem in the 11th century to guard such holy relics as the Shroud of Turin, the Ark of the Covenant and the Hapsburg family’s Spear of Destiny – which was used to ‘kill’ Jesus Christ.

The Priory’s more important purpose was to guard Templar gold and to preserve the alleged bloodline of Jesus – the royal Sangreal – which they believe is carried forth by the French Bourbon Merovingian family and the related Hapsburg monarchs of Spain and Austria. [17]

The French Lorraine dynasty, which descended from the Merovingans, married into the House of Hapsburg to acquire the throne of Austria.

The Hapsburgs ran the Holy Roman Empire until its dissolution in 1806, through King Charles V and others. The family traces its roots back to a Swiss estate known as Habichtburg, which was built in 1020. The Hapsburgs are an integral part of the Priory of Sion.

Many researchers believe that Spain’s Hapsburg King Philip will be crowned Sangreal World King in Jerusalem. The Hapsburgs are related to the Rothschilds through Holy Roman Emperor Frederick Barbarossa’s second son Archibald II.

The Rothschilds – leaders in Cabala, Freemasonry and the Knights Templar – sit at the apex of the both the Illuminati and the Eight Families banking cartel.

The family accumulated its vast wealth issuing war bonds to Black Nobility for centuries, including,

The Eight Families have also intermarried with these royals.

“They (Rothschilds) had the crown heads of Europe in debt to them and this included the Black Nobility dynasty, the Hapsburgs, who ruled the Holy Roman Empire for 600 years. The Rothschilds also control the Bank of England. If there was a war, the Rothschilds were behind the scenes, creating conflict and funding both sides.” [18]

The Rothschilds and the Warburgs are main stockholders of the German Bundesbank.

Rothschilds control Japan’s biggest banking house Nomura Securities via a tie-up between Edmund Rothschild and Tsunao Okumura. The Rothschilds are the richest and most powerful family in the world. They are also inbred. According to several family biographers, over half of the last generation of Rothschild progeny married within the family, presumably to preserve their Sangreal. [19]

The 1782 Great Seal of the United States is loaded with Illuminati symbolism. So is the reverse side of the US $1 Federal Reserve Note, which was designed by Freemasons.

The pyramid on the left side represents those in Egypt- possibly space beacon/energy source to the Anunnaki- whose Pharaohs oversaw the building of the pyramids using slave labor.

The pyramid is an important symbol for the Illuminati bankers.

They employ Triads, Trilaterals and Trinities to create a society ruled by an elite Sangreal few presiding over the masses – as represented by a pyramid. The Brotherhood of the Snake worshiped a Trinity of Isis, Osirus and Horus – who may have been Anunnaki offspring.

The Brotherhood spread the concept of Trinity to:

The reptilian eye atop the pyramid depicted on the $1 bill is the all-seeing eye of the Afghan Roshaniya, known alternately as The Order and Order of the Quest – names adopted by Skull & Bones, Germanorden and the JASON Society. [21]

Take a magnifying glass and look at the eye’s pupil. There is an image of an alien inside the pupil. I’m not kidding.

Novus Ordo Seclorum appears beneath the pyramid, while Annuit Coeptis appears above the all-seeing eye. Annuit Coeptis means “may he smile upon our endeavors (Great Work of Ages)”.

Above the eagle on the right side of the note are the words E Pluribus Unum, Latin for “out of many one”. The eagle clutches 13 arrows and 13 olive branches, while 13 stars appear above the eagle’s head. America was founded with 13 colonies. Templar pirate Jaques deMolay was executed on Friday the 13th.

The numbers 3, 9, 13 and 33 are significant to the secret societies. 33rd-degree Freemasons are said to become Illuminati.

According to the late researcher William Cooper, the Bilderberger Group has a powerful Policy Committee of 13 members. It is one of 3 committees of 13 which answered (until his recent death) to Prince Bernhard – member of the Hapsburg family and leader of the Black Nobility.

The Bilderberg Policy Committee answers to a Rothschild Round Table of 9. [22]

Drinking Lemon Water in the Morning is Good, They Said. Here's What They Didn’t Tell You Previous post
Harvard Psychiatrist On Alien Abductions/Contact: “Yes, It’s Both Literally & Physically Happening.” Next post