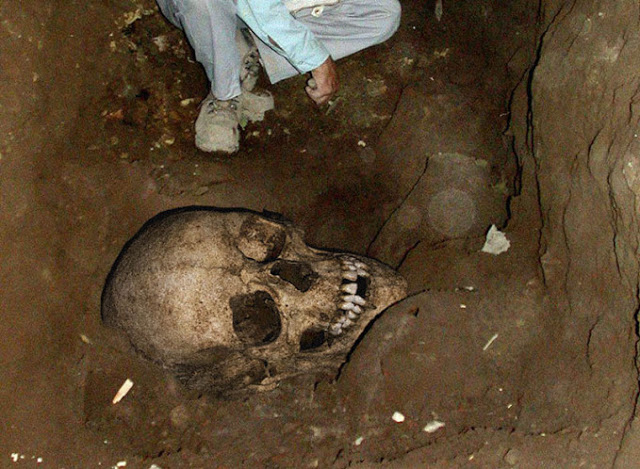 The Ancient Giants With Six-Fingers and Double Rows of Teeth

For centuries, giants have been the basis for many legends and fairytales. These tales aren’t specific to a certain place as every culture on Earth has their own beliefs and stories of towering humans with massive strength.

Why does the idea of super large, disproportionate, humans resonate with so many of our conscious minds?

Maybe it’s because proof of their existence on Earth has been found for centuries; however, the powers that be have denied and hidden the remains that have been found for many varying races and sizes.

In the American Southwest, a tribe of red-haired, six-fingered mummified giants were recently discovered in a cave. 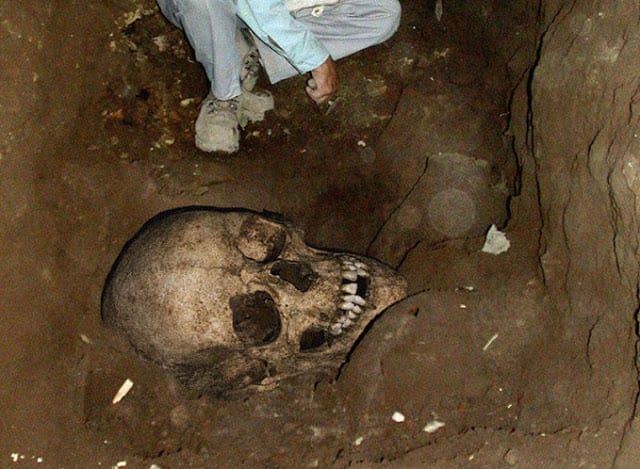 How the skull of a giant looks like (probably Photoshop)

Their heights spanned up to 12 feet tall, however the discovery was not shocking for local Native Americans (Paiute) as the tribe’s oral history included numerous records of their battles with giants.

These accounts were written down by Sarah Winnemucca Hopkins, the daughter of a Paiute chief. Her story explains how the giants were killing and cannibalizing her people.

The Native American storytellers believe that these gigantic beings were the actual original inhabitants of the Americas, preceding modern Native Americans by thousands of years.

Modern Native Americans are believed by most mainstream archeologists to have inhabited the Americas around 9500 b.c. and have populated both continents rapidly. It is thought that they hunted and destroyed the last known gigantic mammals.

More recent discoveries are causing open-minded scholars to evaluate whether or not the Native Americans had eliminated only gigantic mammals however. Evidence has increased that suggests Native Americans also fought and defeated gigantic humans as well.

Remember that due to new discoveries, the actual dates for human settlement of the Americas has been pushed back tens of thousands of years.

Discoveries accepted by even mainstream archaeologists include various clothing and artifacts, yet the multiple discoveries of numerous ancient giant skeletons throughout the Americas have been kept quiet, possibly reburied or held in the vaults of the Smithsonian.

There are many versions of the story telling how the giants came into existence, but the best documented version is written in the bible which reads as follows:

“There were giants on the earth in those days, and also afterward, when the sons of God came in to the daughters of men and they bore children to them. Those were the mighty men who were of old, men of renown.” (Genesis 6:4)

The passage speaks of the Nephilim, which when translated to English, means the “fallen ones.” The Nephilim were believed to be the product of copulation between sons of God and human women and are known as Biblical giants and great warriors.

Throughout the Old and New Testaments, scriptures elude to this intermingling which created the giants who were known for their violence, atrocities and cannibalism.

Similar tales are told by the Sumerians. They speak of “fallen angels” they know as Gods who lived among them and taught them the way of civilized life. This similar belief is present with the Romans, Greeks, Mayans, Egyptians and Incan civilizations.

Evidence of these ancient giants is present in Old Township and county records. Most include quotes from old letters and diaries going back as far as the 1700s.

In that time period, theories regarding the origin of life on Earth mainly relied on creationist views. Those who dug up giant skeletons were astonished by their findings, believing they had stumbled upon the cursed remains of unholy creatures.

Some believed various earthworks were not built by ancestors of the Native Americans, but rather during a more remote period of time that was characterized by a very different social order.

It is said that from the eighteenth century to even the twentieth century, giant skeletons were routinely found in mounds and caves throughout North America by amateur excavators. These discoveries are more concentrated around the Ohio Valley, which was the epicenter of Native American life.

According to the original eyewitnesses, it was here that intrepid settlers discovered giant skeletons and numerous irreplaceable artifacts. These settlers had a great interest in discovering the true history.

It is said that many of these giant skeletons were exposed to the elements and as a result moldered away into the soil hours or days after the exposure. The skeletal remains of these ancient giants not only reveal their height but characteristics that can only be described as bizarre and unusual.

The average giant is approximately 50% taller and at least 100% larger than the typical human being. It is believed they could carry at least 6 times as much weight as a normal man. It was common for these giants to have remnants of red or blonde hair. 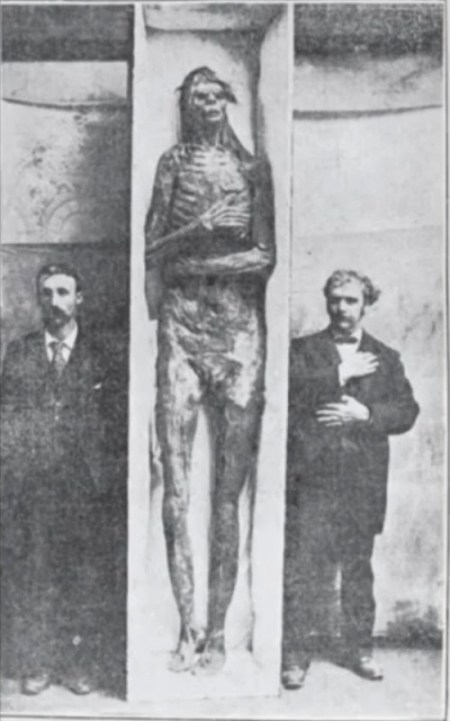 Actual picture of a mummified giant

Facial features included high foreheads, high cheekbones, extremely strong chins and some with a prominent gap between the two front teeth. The hair color and facial features are strongly related to the European culture.

Truly unusual characteristics include double dentition, meaning two sets of teeth. One was situated behind the other. The reasoning behind this is still not clarified but it is speculated that the purpose was to form a better grip on their food.

Unique to the giants, is the existence of six digits, an extra finger on each hand and an extra toe on each foot. This trait has also been described in some Biblical accounts.

Although more rare, some giant skeletons are said to have had horns which protruded from their head similar to those of a goat. 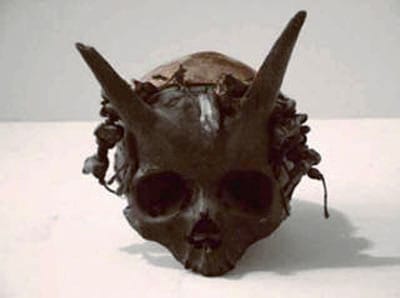 It was at that estimated time that the bodies had been buried around AD 1200. The remains were sent to the American Investigating Museum where it was later claimed that they were stolen.

Evidence suggesting the massive strength of these ancient giants has also been discovered. In an ancient copper mine located in North Wales, more than 2,500 sledge hammers were discovered.

The largest sledge hammer found was noted to be 64 pounds. A hammer of this size is not known to have ever been manufactured. It is estimated that the handle of the sledge hammer had to be at least nine feet in length.

Despite the existing evidence of the giants’ existence, mainstream archaeology works to seal our imaginations by interpreting the past of North America as nothing other than usual in the way of characterized cultures.

It is rumored that beneath the Vatican, many vaults contain the very contents responsible for filling our imaginations for countless generations. These contents are said to be the undeniable evidence that these ancient giants were the first inhibitors of our world.

The Teacher "Gods" That Came From Sirius Previous post
A Warning For All Parents Backed By Science: What WiFi, Cell Phones & More Are Really Doing To Our Health Next post