Phil Schneider, a government geologist and engineer with over 17 years of experience working on “black projects,” is undoubtedly one of the most important whistleblowers in modern history.

In September 1995, Mr. Schneider gave a presentation at the Preparedness Expo in which he exposed the New World Order Agenda and how it connects with extraterrestrials.

During this speech, he presented physical evidence of alien metals and artifacts along with additional photographs to validate his claims

Less than six months after giving this presentation he was found dead in his apartment with a piano wire wrapped around his neck in what most would classify a military-style execution.

According to some close to the investigation, Mr. Schneider had been repeatedly and brutally tortured before being killed. Regardless, the authorities somehow ruled his death a suicide.

Before getting to the video, this article contains a summary of the information Mr. Schneider presented at the Expo, however it’s best you know some basic facts before going into the scope of what is happening right under our noses.

He claims that the information about aliens is kept well hidden from the public and that the U.S. military has known about the presence of aliens for a period of time dating back to 1909.

He also asserted that more than $500 billion dollars was being allocated every year to black projects dealing with alien matters. He further asserted that 28% of the US Gross National Product was being spent on building underground bases.

This “black budget” as he referred to it sidesteps congress completely. There’s little doubt that these projects are still continuing on to this day.

Keep in mind that the following information relayed by Mr. Schneider was from 1995 and has more than likely progressed in a significant manner since that time. 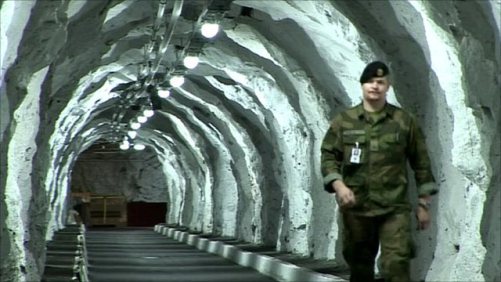 Each base cost an average of 17-19 billion dollars (in 1995 money) and took 1-2 years to construct with the use of highly advanced methods of construction that included vitrifying and melting rock using lasers that reduced the rock to powder and then they smoothed out the tunnels using boring machines.

Mr. Schneider further claimed that these bases are massive and house thousands upon thousands of people.

2. Magneto-levaton trains connect all the DUMB bases with in the United Stated in a enormous transport system capable of speeds of MACH 2 or higher. He claims there is a whole other world down there that is filled with both human and alien lifeforms.

3. Area 51 is actually a complex composed of 9 deep underground bases and there are over 18,000 workers whose lives are highly regulated and entirely veiled in secrecy.

4. The United States government signed an agreement in 1954 with extraterrestrials granting them permission to experiment on humans and cattle in exchange for technology. This agreement, known as the Grenada Treaty, is a well-documented event.

The original terms of this agreement stated that only a small amount of humans could be abducted, they had to be returned where they were found, and their memory of the event had to wiped clean. The aliens were also supposed to supply a list of the humans they were taking to Majestic-12.

However it became clear after a few years that the aliens were taking far more humans than they originally agreed to.

5. Mr. Schneider alleges that there are 11 distinct alien races on Earth. Two of these species are benevolent.

6. “The New World Order and the alien agenda are one and the same.” Mr. Schneider describes the alien agenda as “the complete takeover of this planet, killing off 5/6 to 7/8 of the world’s population by 2029.”

Obviously an alien takeover would mean that a one world government would be put into place and would, in all probability, be the end of freedom as we know it.

7. At least 9 races of alien beings view humans as a food source. They are not all cannibals. Instead they use secretions from the glands of humans and animals for the mixtures of vitamins in their food and some alien races can get high off of adrenaline.

8. Sixteen days before he gave the presentation, Mr. Schneider was shot in the shoulder by an FBI agent who wanted to kill him. Mr. Schneider shot and killed the agent in self-defense. In addition, he reported the incident to the FBI who dismissed him and the entire incident.

He claims that 11 previous attempts were made on his life since he started speaking out. He also claims that DIA agents tried to kidnap his daughter but were unsuccessful due to the heroic actions of his ex-wife.

The way I see it, if half of what Mr. Schneider said is true, then as a nation, a society, a civilization, the human race needs to wake up, band together, and demand answers from our governments, our leaders, and other powers that be.

We can no longer live in the bubble we call our lives, we must look outside ourselves and pay attention to what isn’t being said or reported in mainstream media and read between the lines, do our own research and independent thinking to discover the truth – because the truth is out there.

Here is Phil Schneider explaining his experiences at one of his last lectures before being murdered.