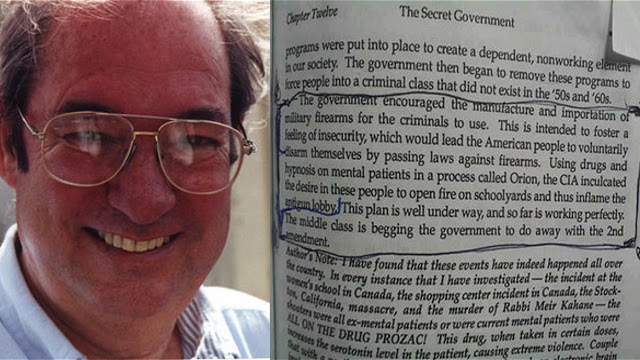 The following information comes from the pages of Milton William Cooper’s 1991 book Behold A Pale Horse:

“The government encouraged the manufacture and importation of firearms for the criminals to use. This is intended to foster a feeling of insecurity, which would lead the American people to voluntarily disarm themselves by passing laws against firearms.

“Using drugs and hypnosis on mental patients in a process called Orion, the CIA inculcated the desire in these people to open fire on schoolyards and thus inflame the anti-gun lobby. This plan is well under way, and so far is working perfectly…”. 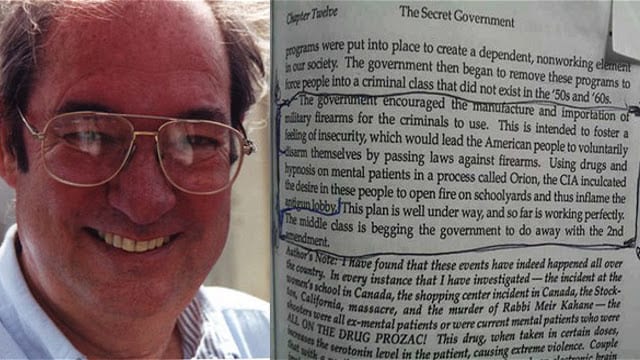 Milton William Cooper (May 6, 1943 – November 5, 2001) was an American radio broadcasters who spoke out about Secret Societies of the New World Order (NWO), and author best known for his 1991 book, Behold a Pale Horse, in which he claimed global conspiracies, some involving aliens.

On November 5, 2001 Cooper was fatally shot by a law enforcement officer at his Eagar, Arizona home after confronting deputies, who had entrapped him, trying to arrest him and ‘claiming‘ he shot one of them in the head.

Authorities ‘claimed‘ Cooper was carrying a handgun and fled when Apache County deputies identified themselves and tried to arrest Cooper on charges of aggravated assault with a deadly weapon and endangerment stemming from earlier disputes with local residents.

Federal authorities reported that Cooper spent years trying to avoid capture on a 1998 arrest warrant for tax evasion and according to a spokesman for the U.S. Marshals Service, Cooper vowed “he would not be taken alive.”

Mark Potok, spokesman for the propaganda machine Southern Poverty Law Center, writes that Cooper was well known within the militia movement for his book, “Behold a Pale Horse”, and his anti-government shortwave radio program.

Political scientist Michael Barkun characterized “Behold a Pale Horse” as “among the most complex superconspiracy theories” and also among the most influential, being much read in militia circles as well as widely sold in mainstream bookstores.

According to Cooper, he served in the US Air Force and the US Navy and was discharged in 1975. He caused a sensation in UFOlogy circles when in 1988 he claimed to have seen secret documents while in the US Navy that referred to government knowledge and involvement with extraterrestrials.

He had come to believe that the extraterrestrial part of it was nonsense, but that the technology was real. He later went on to do extensive research and discovered that there had been a plan in existence for the government to pull off a fake alien invasion in order to unite the world into a one world tyrannical government (NWO).


Cooper wrote of the Illuminati as a secret international organization controlled by the Bilderberg Group that conspired with other individual organizations such as the Jesuits, the Masons, Skull and Bones, Trilateral Commission, Council on Foreign Relations, etc. and whose ultimate goal was the establishment of a New World Order (NWO).

Cooper claimed the document “Protocols of Zion” was actually an Illuminati work and instructed readers to substitute the word “Sion” for “Zion”, “Jews” (Ashkenazi) for “Illuminati”, and “Goyim” for “cattle”.

In June 2001, three months before the 9/11 attacks on the World Trade Center, Cooper had released the following information claiming that there were plans to carry out a false-flag operation and that Osama Bin Laden would be framed for the attacks.

He claimed that Bin Laden would be nothing more than a scapegoat. At the time Cooper didn’t know where the attacks were planned to be carried out but he knew they were going to happen.

In actual fact, it wasn’t just Cooper who had managed to get his hands on (and disclosed) such information.

Movie director Aaron Russo (who directed the movie Trading Places) had also managed to get his hands on such information and had released a film-documentary about his discoveries entitled America: Freedom To Fascism.

Many believe that this cost him his life. Bill Cooper’s book, Behold A Pale Horse, is available on Amazon.