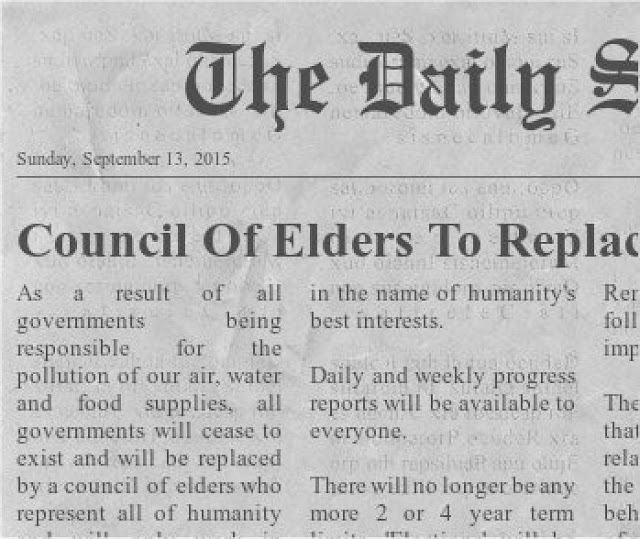 Council of Elders to Replace All Governments

Imagine waking up and reading this headline or watching this on the nightly news… As a result of all governments being responsible for the pollution of our air, water and food supplies, all governments will cease to exist and will be replaced by a council of elders who represent all of humanity and will only work in humanity’s best interests.

All ideas and decisions will be transparent within this council of elders as each elder will be held accountable for making continuous improvements in the name of humanity’s best interests.

Daily and weekly progress reports will be available to everyone. 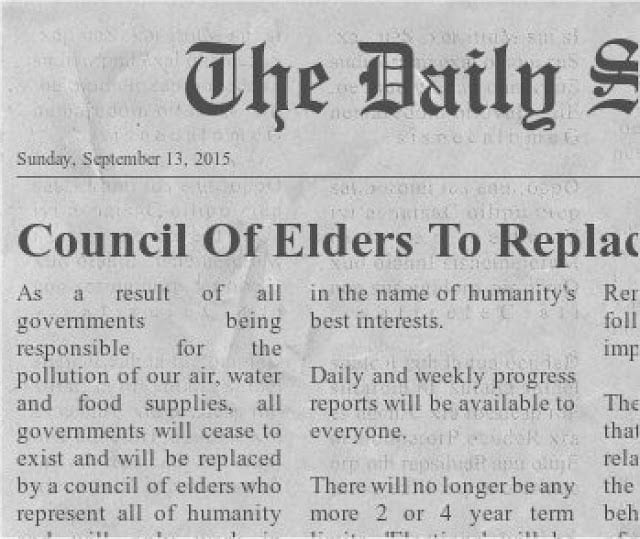 There will no longer be any more 2 or 4 year term limits. ‘Elections’ will be held every 6 months to either maintain the current council members or to oust those who are either not working in humanity’s best interests or have not made any progress within that time frame.

Even though shadow governments and secret societies will try to maintain their dominance over humanity, their existence will fade away as all suppressed technologies are released, including free energy, cancer cures and teleportation.

Water purification technologies will be released where anyone and everyone will have access to fresh, clean water, including technology that purifies salt water into drinking water.

The genetic engineering of our air and food supply will no longer be in existence and those who have been responsible for polluting our air, water and food supplies will be held accountable for their actions, as well as any other crimes against humanity.

These people will not be placed in prison, but they will be the ones who help to build this world into a better place for all of us, including themselves.

They will be on the assembly lines for free energy devices or working in the fields planting and/or harvesting enough organic food to feed the world and to help end starvation.  They will be building eco-friendly homes for those who are homeless or helping to purify our water systems.

The assets of all corporations who have been working against the best interests of humanity will be seized and redistributed to the global population, creating abundance for everyone.

Ubuntu communities will be set up where each person only has to work 3 hours per week within their community and will no longer be an economic slave for the 1% of society.

During this transition, we will transit out of the fiat-based currency model into a model of wealth and abundance for all.

The only remaining ‘stores’ would be ones that support this new way of life without the need for excessive profit and gain at the expense of others, including people and our planetary resources.  As each Ubuntu community evolves, all forms of money will become non-existent.

The following video provides ideas and solutions to everything that is wrong with this world.


As it mentions in the video, all ideas would be open source as patents and copyrights would no longer exist. For example, if somebody invented a new technology that benefits humanity, a different person could take that idea and make it better. Patents and copyrights have held us back from evolving into a Type 1 Civilization.

Our current way of life is unsustainable and at this juncture, it is imperative to come up with viable solutions. What ideas do you have?

Continue reading: Exposing the 13 families that rule the world through fear, money and deception — How to escape their control