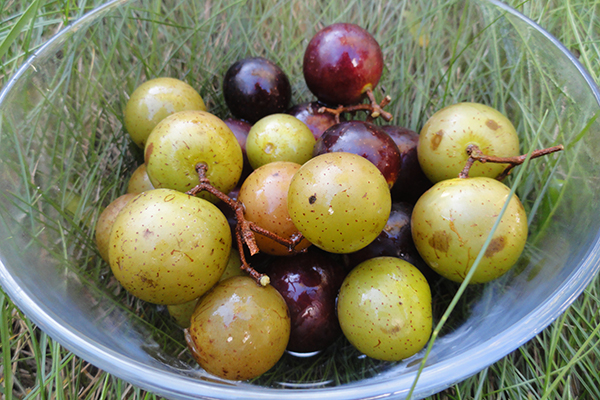 Have you ever heard of Muscadine grapes? They’re not exactly well known across most of the country, but science is confirming that these unique fruits are antioxidant superstars and have an abundance of a cancer-fighting compound called resveratrol.

First discovered by the colonists about 400 years ago on Roanoke Island of North Carolina, Muscadine grapes became very popular to grow in that state and a few other southern states.

They are in peak season right now until mid-fall, and they can be found at a few supermarkets across the nation and were spotted at Whole Foods earlier this week. It’s the perfect time to try them and see for yourself why the Muscadine variety Scuppernong became the official state fruit of North Carolina in 2001. 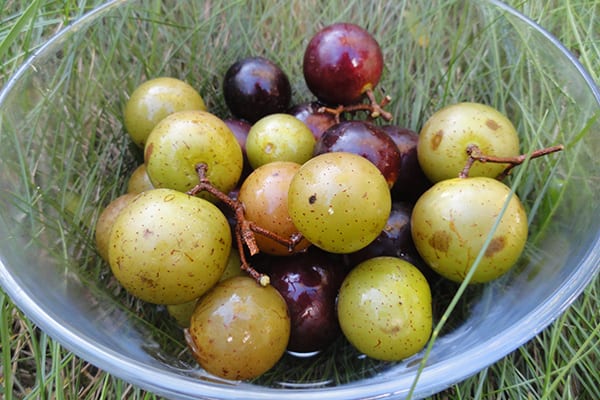 If you’ve never tried them before, these grapes are bigger than the other grape varieties, round with a tough skin and a few seeds, and are bronze or black in color.

“All Scuppernongs are Muscadines, but not all Muscadines are Scuppernongs,” according to the North Carolina Muscadine Grape Association. The Muscadine name includes the whole category of grapes, both bronze and black varieties, including Scuppernongs. Scuppernong is a specific and the most popular bronze grape variety, but the name has been often used to describe any bronze Muscadine grape. 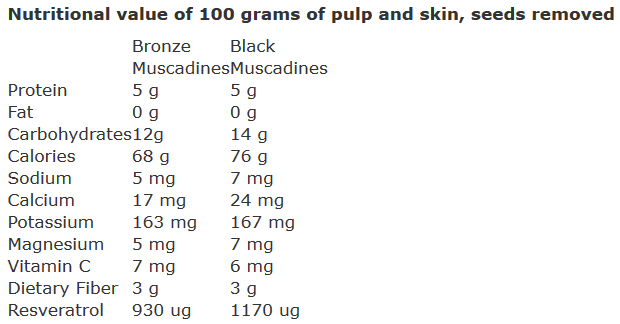 It is important to note, that while this source measured resveratrol values only in the pulp and skin, research has found that a lot of resveratrol is found in the seeds of the grapes, and many find it beneficial to swallow the seeds.

Mississippi State University measured that there is about 40 times more resveratrol in golden and black Muscadine grapes than there is in Pinot, Chardonnay and Gamay grape varieties.

Rich in Resveratrol: a Cancer-Fighting Compound

Resveratrol is naturally found in grapes, and the American Institute of Cancer Research (AACR) website names grapes and grape juice to be on the list of “foods that fight cancer.”

Numerous studies have confirmed over the years the greatness of resveratrol when it comes to cancer prevention.

It was named chemopreventive by Science as early as in 1997 – meaning resveratrol prevents and slows down the growth of cancer cells in the body. In 2012 it was found to suppress prostate cancer growth.

A 2014 study concluded that there is enough research to show that resveratrol helps to prevent cancer, but future research in needed to see exactly which cancers it can suppress once they are already developed.

It has a long list of other benefits too: antiaging, cardioprotective, and beneficial for metabolism. A 2013 study stated that resveratrol has great potential to be a therapeutic agent for neurological diseases including stroke; and a 2014 study found its antioxidative and anti-inflammatory properties to be beneficial against Alzheimer’s disease.

Science News has stated that many researchers agreed that resveratrol is the answer to the French Paradox.

How did the fatty French cuisine not make the French population overweight and plagued with heart disease? The explanation is the cardioprotective protective and weight-managing properties of resveratrol contained in every glass of wine, which the French are known to drink consistently.

The rare grapes are also great if you plan on living longer: a 2005 Harvard study has found resveratrol to have a “life-promotion mechanism” which helped the mice consuming it to live 25% longer than the other mice, reported University of Pittsburgh Medical Center.

Because Muscadine grapes have 40 times more resveratrol, and are about 40 times stronger in antioxidant properties, they generally have more health benefits than other grapes.

A 2011 study found Muscadine grape seeds and skin to be very effective in preventing the growth of cancer cells including breast, skin, prostate colon, lung, blood and brain cancers.

At a 2011 AACR annual meeting it was announced that Muscadine grape seed and skin extract showed a 92% inhibition of cancer cell growth in triple-negative breast cancer, 81% of lung cancer cells, and 90% of colon cancer cells.

A long list of other studies including of cardiovascular benefits and weight loss benefits of Muscadine grapes can be found at Muscadine Health Research blog.

And if you’re still not convinced, find a grower in your area and taste for yourself!

This article is for informational purposes only. Not intended to treat or prevent any diseases.