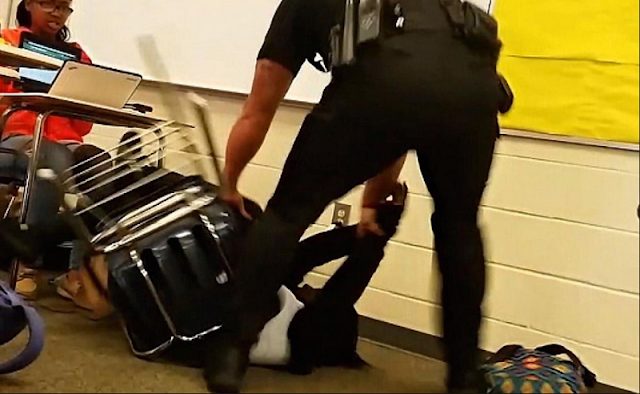 A Spring Valley High School student took her cell phone out in math class. According to her classmate, Tony Robinson Jr., “it was only for a quick second.”

But that made no difference to the teacher, who, adhering to the “zero tolerance” policy so common in American schools, demanded she surrender her phone.

Already deprived of her freedom by compulsory schooling, she refused to be deprived of her property, as well. The teacher called in a school administrator. She still would not obey, so the petty bureaucrats literally called the cops on her.

The school’s resource officer, Sheriff’s Deputy Ben Fields, was summoned to coerce compliance out of the willful girl. 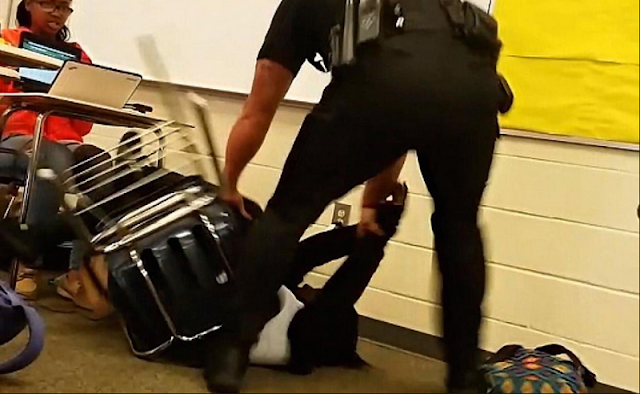 Upon entering the classroom, Officer Fields had a desk moved and transferred a laptop computer from the girl’s desk to another one, according to Robinson.

You can see him calmly setting the laptop down in one of the videos. What was he preparing the surroundings for?

“When I saw what was about to happen my immediate first thing to think is let me get this on camera.

He took out his phone to start recording. Robinson continued:

“He asked her again, ‘will you move, will you move.’ She said ‘no, I have not done anything wrong. Then he said ‘I’m going to treat you fairly.’ And she said ‘I don’t even know who you are.’ And that is where it started right there.“

Officer Fields wrapped one arm around the girl’s neck, placed his other hand under her thigh, and violently flipped her backward onto the floor, along with her combination desk/chair.

By her wrists and thigh, he then dragged her and the entangled desk along the floor, yanked her free of it, and flung her to the front of the classroom, where he mounted and cuffed her.

Quite clearly, that was what moving the desk and laptop was all about. From the moment he was called in, the cowardly bully knew he had an excuse to live out his martial arts fantasies by assaulting a defenseless teenage girl.

He cleared the way so his planned attack would not be obstructed or result in the expensive destruction of what might have been school property.

Another classmate, Niya Kenny, who also recorded the assault, was arrested as well — for vocally protesting.

“I was screaming ‘What the f, what the f is this really happening?’ I was praying out loud for the girl,” Kenny told WLTX. “I just couldn’t believe this was happening I was just crying and he said, since you have so much to say you are coming too. I just put my hands behind my back.”

Although it was premeditated, what may have made the assault particularly zealous was the cop’s petulant indignation over the girl’s “I don’t even know who you are” remark.

It wouldn’t have been the first time Fields flipped out after detecting the slightest note of ‘disrespect.’ That also describes another of his assaults from back in 2005.

“Martin said the beefy officer ‘snapped’ after he called him ‘dude,’ and slammed him on the ground. He began pepper-spraying the helpless veteran, but Martin said he was trained in the military to resist the chemicals. An entire canister of the stuff failed to disable Martin.

‘He became even more violent because I didn’t react like most people would,’ Martin told the News.

His wife at the time, Tashiana Rogers, witnessed the fracas, and ran outside to take photos of the violent encounter with her cellphone.

That’s when Fields called for his partner to ‘get her black ass,’ Martin said. The officer grabbed her phone and deleted the photos.

Fields then called for backup.

‘I’m watching my wife get beat up in front of me, and there’s nothing I can do about it,’ Martin said.

During the arrest, Martin told Fields the rough arrest would lead to a lawsuit.

‘I’m glad Johnny Cochran is dead,’ Fields shot back, according to Martin.

The officer also told Martin as he was cuffed that ‘you’re just another notch in my belt,’ according to court documents.

‘That was shocking. I was definitely shocked that the jury did not find in her favor,’ Mobley said.

Rogers was shocked too. She worries Fields was allowed to operate with impunity — giving him freedom to terrorize high school students.

‘I felt like if he had felt the consequences from 2005, this wouldn’t happen today,’ she told the Daily News.”

Fields was recently fired over the Spring Valley incident, but it is doubtful he will ever be prosecuted. He will more likely become yet another “gypsy cop” wandering from department to department, leaving battered and broken human beings in his wake.

Unleashing rabid cops like Fields on kids is just one aspect of the evolution of American schools into high-security prisons, as outlined by John W. Whitehead of the Rutherford Institute in his essential essay:

“Public School Students Are the New Inmates in the American Police State.”

“Every day in communities across the United States, children and adolescents spend the majority of their waking hours in schools that have increasingly come to resemble places of detention more than places of learning.

“From metal detectors to drug tests, from increased policing to all-seeing electronic surveillance, the public schools of the twenty-first century reflect a society that has become fixated on crime, security and violence.”

“… America’s public schools contain almost every aspect of the militarized, intolerant, senseless, overcriminalized, legalistic, surveillance-riddled, totalitarian landscape that plagues those of us on the ‘outside.’”

As such, they have become:

“… a microcosm of the American police state, right down to the host of surveillance technologies, including video cameras, finger and palm scanners, iris scanners, as well as RFID and GPS tracking devices, employed to keep constant watch over their student bodies.”

Here is Whitehead on cops in schools:

“What previously might have resulted in a detention or a visit to the principal’s office was replaced with excruciating pain and temporary blindness, often followed by a trip to the courthouse.

“Thanks to a combination of media hype, political pandering and financial incentives, the use of armed police officers to patrol school hallways has risen dramatically in the years since the Columbine school shooting (nearly 20,000 by 2003).

“Funded by the U.S. Department of Justice, these school resource officers (SROs) have become de facto wardens in elementary, middle, and high schools, doling out their own brand of justice to the so-called ‘criminals’ in their midst with the help of tasers, pepperspray, batons and brute force.

“The horror stories are legion.

“One SRO is accused of punching a 13-year-old student in the face for cutting the cafeteria line. That same cop put another student in a chokehold a week later, allegedly knocking the student unconscious and causing a brain injury. In Pennsylvania, a student was tased after ignoring an order to put his cell phone away.”

And here is Whitehead on the school-to-prison pipeline:

“…the government is also contracting with private prisons to lock up our young people for behavior that once would have merited a stern lecture. Nearly 40 percent of those young people who are arrested will serve time in a private prison, where the emphasis is on making profits for large megacorporations above all else. […]

“For instance, two Pennsylvania judges made headlines when it was revealed that they had been conspiring with two businessmen in a $2.6 million ‘kids for cash’ scandal that resulted in more than 2500 children being found guilty and jailed in for-profit private prisons.”

However, the “school-to-prison pipeline” is actually more of an inter-prison transfer system. As Whitehead writes:

I would offer one quibble. Schools “resemble” prisons because they are prisons. The trend we are seeing is simply that the lower security prisons we incarcerate our children in are becoming more like the high security prisons we bury drug offenders under.

Indeed, as psychologist Peter Gray has asked, what distinguishes a school from a prison?

“The only difference I can think of is that to get into prison you have to commit a crime, but they put you in school just because of your age. In other respects school and prison are the same. In both places you are stripped of your freedom and dignity.

Dr. Gray argues that we make a distinction without a difference between school and prison as a coping mechanism:

“We all tiptoe around this truth, that school is prison, because telling the truth makes us all seem so mean. How could all these nice people be sending their children to prison for a good share of the first 18 years of their lives? […]

“…people rationalize it by saying (not usually in these words) that children need this particular kind of prison and may even like it if the prison is run well.

“If children don’t like school, according to this rationalization, it’s not because school is prison, but is because the wardens are not kind enough, or amusing enough, or smart enough to keep the children’s minds occupied appropriately.”

But in reality, as Dr. Gray explains, children need not special prisons, but freedom in rich and varied social environments to teach themselves — as they are naturally inclined to do. For more details, read Dr. Peter Gray’s indispensable blog at Psychology Today.

As John Taylor Gatto makes clear in his work, schools only succeed in fostering the learning they were designed to impart in the first place: (1) habitual slavish compliance to authority and (2) an inert, incurious dullness and revulsion for the world of ideas. The second teaching reinforces the first.

Schools are prison labor camps where children are forced to toil at the production of their own spiritual chains.

Officer Fields dragged and and shackled that young girl like a prison inmate because she is one. All schools are prisons.

But then all prisons are schools, too. Officer Fields, like all prison guards, also acted as a teacher. What you see in that video is not just police brutality, but education.

And the instruction he imparted was in perfect harmony with the core curriculum of all schools. Officer Ben Fields was teaching not only his victim, but every student in that room the following lesson: