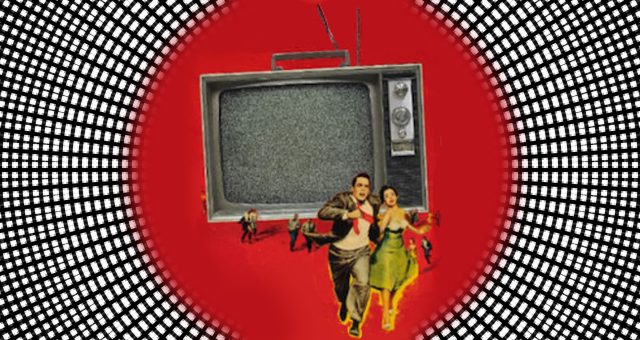 4 Examples of Mainstream Media Fabricating News to Push for War

As we inch further into the future and evermore closer to the next, and certainly last, world war, it seems proper to give pause and consider the significance of the fact that much of the information provided on world events is dreadfully compromised by corporate and political propagandists.

Mainstream media, with its exceptional reach, is able to mold the public’s first impression of any global event thereby establishing the ‘official story,’ the one that is repeated again and again during the first moments of a crisis.

They capitalize on the immediate shock value of an act of extraordinary violence or unrest to mold public perception into conformity with a narrative that will become the abiding fiction by which any further substantive investigation of the event must be measured against. 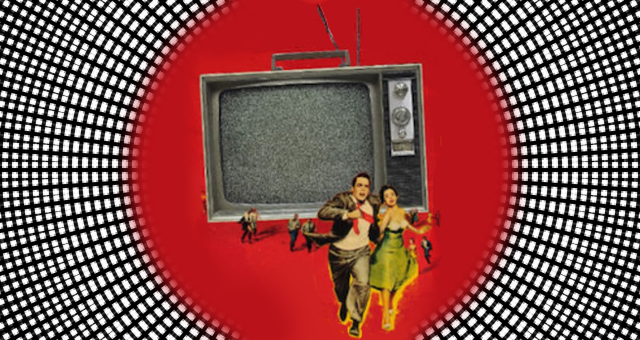 9/11 is perhaps the best example of this, as nearly 15 years afterwards, an incredible amount of information and research has become available the public, at least enough to unseat the official version of events and inspire a deeper investigation, yet contrary reporting is still not taken seriously at all by mainline media outlets.

“The news is all about artificially manipulating the context of stories. The thinner the context, the thinner the mind must become to accept it. If you want to visualize this, imagine a rectangular solid. The news covers the top surface. Therefore, the mind is trained to work in only two dimensions. Then it can’t fathom depth, and it certainly can’t appreciate the fact that the whole rectangular solid moves through time, the fourth dimension.” – Jon Rappoport

Sometimes the media gets caught fabricating events and twisting reality. Here’s a disturbing look at some of the more recent examples of mainstream media news deceptions, staged events and psy-ops that have been exposed by the international independent press.

With BBC reporter Ian Pannell standing amidst a host of crisis victims while on the scene at a small rural hospital in Syria, a supposed incendiary bomb or napalm attack happened, and as they were filming and a stream of wounded patients began pouring in.

A doctor was interviewed on the scene, remarking that a napalm attack had occurred.

One month later as the NATO pressed for military intervention in Syria, the exact same footage was used in a new video report, however, the audio of a crisis doctors statement had been digitally altered. The word ‘napalm,’ had beeb changed to ‘chemical weapons,’ an obvious deception.

This video ‘…shows both versions are identical and from the same speech. The BBC then digitally altered the words from ‘napalm’ to ‘chemical weapon,’ the exact justification that NATO was finding difficult to prove.” [Source]

Watch the analysis of this totally fabricated event for yourself here:

In 2014, as the Western supplied mercenary army ISIS was rising to its prominance as the CIA’s most evil proxy army to date, a series of frightening videos emerged of ISIS executioners with heavy British accents sawing the heads off of Western hostages, including freelance journalist James Foley. 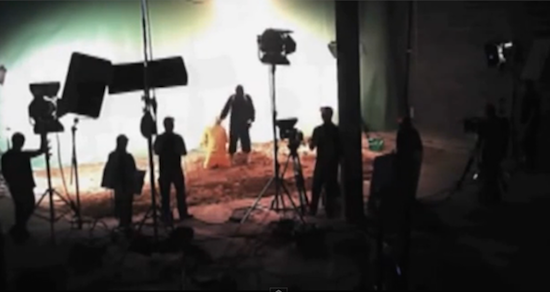 Still shot from the video allegedly showing the fabrication of the James Foley execution.

Graphic videos of the slayings were posted online and shortly afterward, another video emerged online purportedly showing the movie set where the Foley beheading was fabricated.

The authenticity of this video is also unverifiable, however, even technical elements in the original video suggest manipulation, and some experts agree that the Foley video is staged.

As reported by The Telegraph UK:

“…a study of the four-minute 40-second clip, carried out by an international forensic science company which has worked for police forces across Britain, suggested camera trickery and slick post-production techniques appear to have been used.”

The executioner was later identified by intelligence agencies as 23 year-old British rapper Abdel-Majed Abdel Bary, and like Osama bin Laden, he became a resuable icon in the propaganda campaign in the war on terror.

For his media appearances he was given a catchy name, ‘Jihadi John.’ When Jihadi John’s mileage ran out, he was literally ‘evaporated’ by a night time drone strike in Raqqa, Syria. His death, like Bin Laden’s, was celebrated by many. Another brick in the wall.

‘He walked out of a building and got in the car. We struck it right after with zero collateral damage,’ a counter-terrorism official said. ‘The vehicle was on fire. It was a 100 per cent flawless, direct hit.’ [Source] 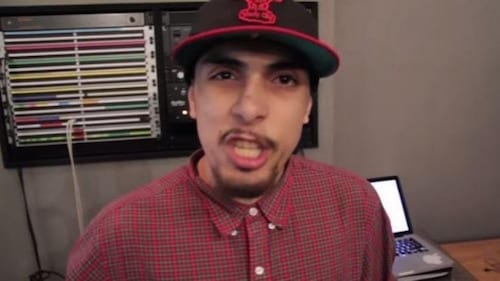 ‘Jihadi John’ before being ‘evaporated’ by a drone strike. 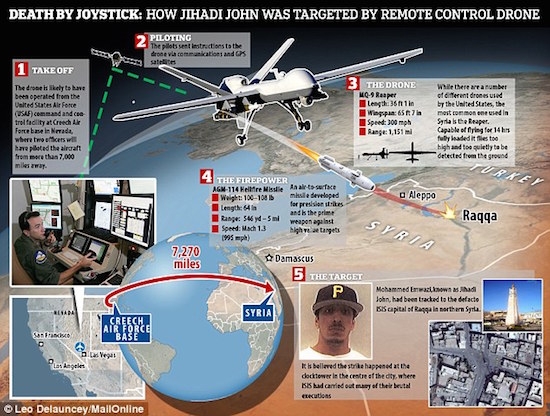 If you recall, in the early days of the war on terror, the faces Al Qaeda’s top lieutenants were plastered on decks of playing cards, serving the same purpose as Jihadi John; terror stooges assassinated as needed to maintain public interest in the war on terror. 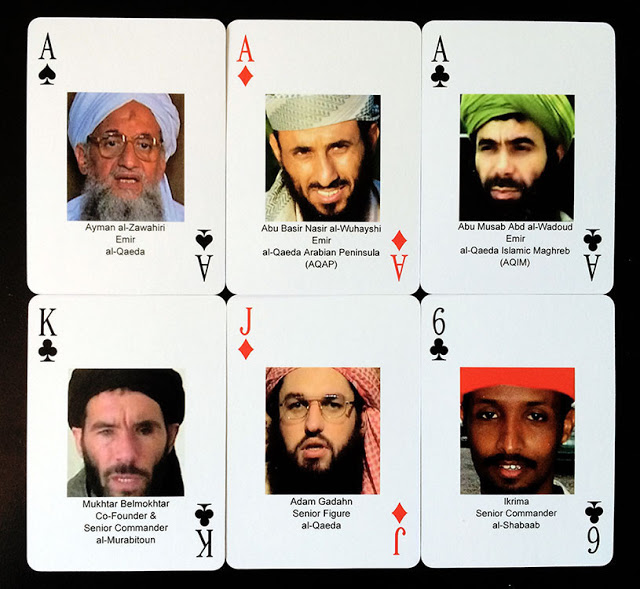 In the following clip which contains numerous examples, CNN and other major news outlets are caught again and again fabricating news reporting with chroma key green screens in network studios, posing as thought they were engaging in front line war reporting. The use of chroma key is ubiquitous in the mainstream media, and with it they can effectively pull off just about any visual deception.

Have a look at this collage of mainstream news fakery:


In this photo, an ABC news anchors makes the blunder of wearing a green shirt to the taping of an important news segment about Kim Kardashian’s wedding. 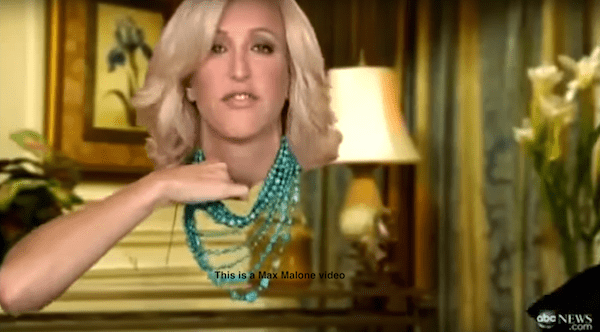 Let’s also not forget what Hollywoood is capable of these days:

Politicians and public leaders depend on professional public relations managers to ensure their likeability. In 2015, after the attack on Charlie Hebdo magazine in Paris, France, leaders from over 40 nations gathered side-by-side with the French president in a much hyped public display of solidarity against terrorism.

They were shown leading an excited crowd with determined sincerity on their faces, yet when originally unpublished photos of the event were revealed, it was discovered that it was a staged photo-op, not an actual genuine action by these fearless leaders. The wide angle shot shows them standing alone in a blocked off, heavily guarded side street. 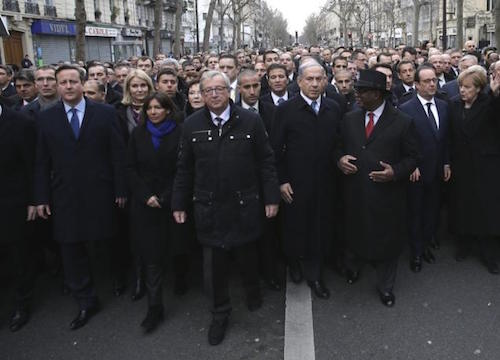 If you’re getting your news from mainstream programming, you know that it’s fake. Because 90% of media in the US is owned by a mere 6 corporations, even the local news programming is pre-packaged and delivered from corporate HQ as either completed news reels or scripts to be read on camera by your favorite, loveable local news anchor.

Comedian Conan O’Brien does a fabulously and hilarious job of demonstrating just how ridiculous and foolish local news casts are. There is little to no authenticity left in nightly news casts. See for yourself:

All of this is, of course, nothing new. Almost everything in our world seems to be fake these days. Remember former Secretary of State Colin Powell’s speech at the UN justifying the 2003 invasion of Iraq? 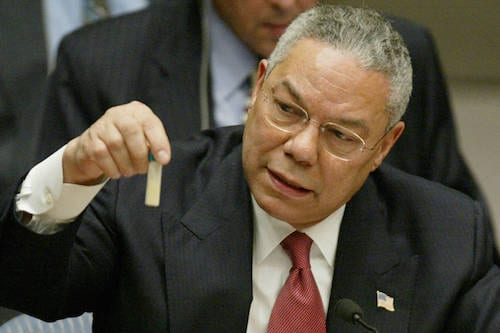 In order to justify the second war on Iraq, Colin Powell showed up at the UN
with enough supposed anthrax to kill everyone in the building.

There are other examples as well, including the use of crisis actors which are people who appear in press inerviews and on teh scenes in multiple public events. The amount of resources that go into creating false realities for the masses is an absurd misallocation of human effort, and an embarrasing assault on human intelligence.

Since the mainstream medias is working in concert with the military industrial complex and corrupt governments to push the world over the brink and into all out war, it’s up to individuals and independent researchers to counter the propaganda and free the minds of those who are ready to wake up.

More evidence that the Main Stream Media is fabricating news for propaganda reasons:

About the author: Dylan Charles is a student and teacher of Shaolin Kung Fu, Tai Chi and Qi Gong, a practitioner of Yoga and Taoist arts, and an activist and idealist passionately engaged in the struggle for a more sustainable and just world for future generations. He is the editor of WakingTimes.com, the proprietor of OffgridOutpost.com, a grateful father and a man who seeks to enlighten others with the power of inspiring information and action. He may be contacted at [email protected].

Happiness According to Science — Everyone Can Do It! Previous post
Is the Voynich manuscript the Memoirs of a Stranded Alien? Next post