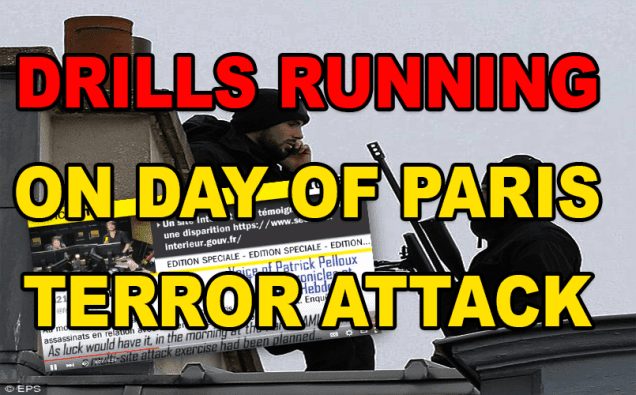 Bombshell! Massive Drills On Same Day As the Paris Attack

We are now learning that there were massive drills being staged in Paris on the day of the attacks that claimed the lives of over 150 people.

This is huge news because so often we see drills being carried out at the same time as real events unfold, and this of course is no coincidence.

There we drills running at the same time as the 9/11 attack, the 7/7 attacks in London and more recently on the morning of the Boston Marathon.

Remember Peter Powers sitting on BBC on the morning of the 7/7 attacks nonchalantly talking about how it was a lucky coincidence that there were training drills running that morning that just so happened to be simulating the very attack that unfolded? 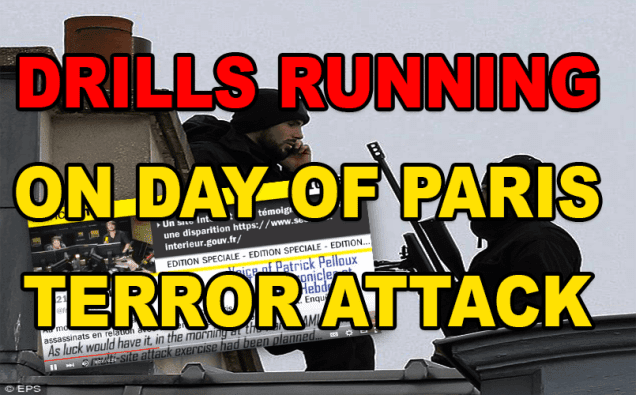 By having drills, it serves a number of purposes for those pulling any strings of real events that are to unfold at the same time. Firstly, it mobilizes all the emergency services and has them ready for what some know will be mass casualties.

Running drills provides cover for the few dark operatives that are in on the operation. Don’t be thinking that everyone on the drills knew that there would be a real event, far from it. People taking part in the drill get confused as to whether its “real world” or “drill”.


What may happen is that the operatives that are running the “terror attack” will move weapons and logistics under the premise that its part of the drill should they get caught & due to the compartmentalization of these events, not anyone operative will be aware of the full plan so as not to be able to spill the beans in the event of being caught be genuine law enforcement and the spooks that are not on the inside.

“As luck would have it, in the morning of the Paris SAMU (EMT), a multi-site attack exercise had been planned, so we were prepared. What needs to be known is there was a mobilization of police forces, firemen, EMTs, associations who came [to participate] and we tried to save as many people as possible.” — Patrick Pelloux, EMT and chronicler at Charlie Hebdo

At the very least it suggests someone had prior knowledge that something was going to happen, hence mobilizing the emergency services in readiness for the real deal.

The 7/7 London Bombing — Identical drills, at the same time, in the same place as the real attacks


Bomb drills at the same time and same place as the Boston Marathon bombing:
The 46 Exercises and Drills of 9/11 (including at the same day and time as the actual event):
No doubt there will be more to follow as the details emerge and the stories begin to unravel.

However, dont lose sight that despite all the shenanigans that are obviously at play here, that real people did in fact lose their lives. Thoughts and prayers to those affected.

Examples of active drills held at the same time and place as the actual “terrorist” attacks:

Must read: 9 Reasons to Question the Paris Terror Attacks

Full analysis of the events as they unfolded: Scenarios, suspects and speculations:

By Kev Baker | Small additions by Alexander Light
Polarize and Conquer — How the Paris Attacks Benefit ISIS and the Western Military Industrial Complex Previous post
Oops, They Did It Again! Paris Suicide Bombers & the Magic Passports Next post