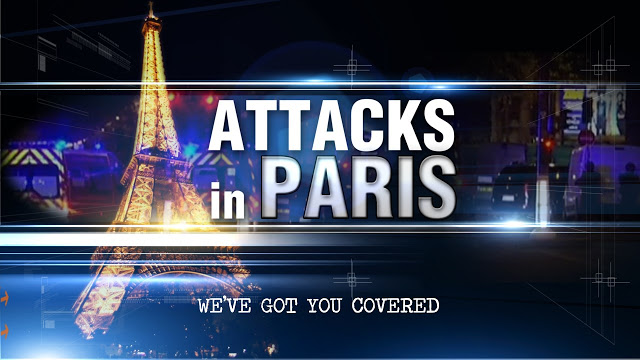 The Paris False Flag Latest News — You Won’t Belive It!

I have received a report from European security that there was a massive cyber attack on French systems 48 hours prior to and during the Paris attacks.

Among other things, the attack took down the French mobile data network and blinded police surveillance. The attack was not a straightforward DDOS attack but a sophisticated attack that targeted a weakness in infrastructure hardware.

Such an attack is beyond the capability of most organizations and requires capability that is unlikely to be in ISIL’s arsenal. An attack on this scale is difficult to pull off without authorities getting wind of it. The coordination required suggests state involvement. 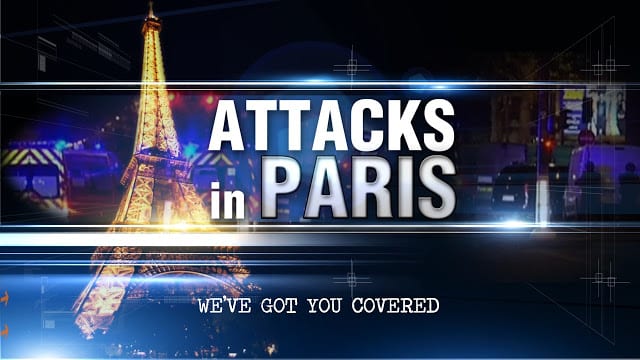 It is common for people with no experience in government to believe that false flag attacks are not possible, because they think the entire government would have to be involved and not everyone would go along with it. Someone would talk.

However, if the report I have received is correct, hardly anyone has to be involved, and security forces are simply disabled.

Remember the reports that during 9/11, a simulation of the actual events that were occuring was being conducted, thus confusing responsible parties about the reality.

I am unable to reveal any further information. If security experts find the information credible, they should direct their inquiries to the French authorities. [1]

In my recent writings I have explained the many agendas served by the false flag Paris attack.

I also predicted that other countries would follow France’s lead in closing their borders, thus dispossessing the dissenting political parties of their issue and preserving the political power and control of the European establishment. 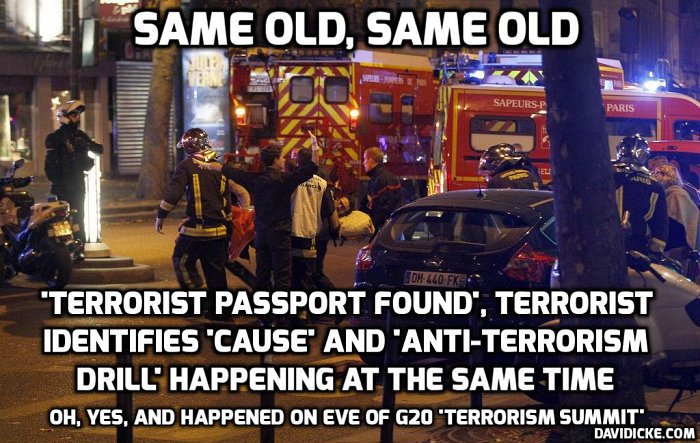 Germany is now moving in the direction of repulsing refugees: https://www.rt.com/news/322208-paris-attacks-german-policy/

By the time the Paris attack and all that will come in its wake run their course — new military measures against ISIL, Western intervention without Syrian government approval, PATRIOT Acts for European countries, and possibly a new and more draconian PATRIOT Act for the US, increased association of dissent with ISIL terrorism — Trump and Sanders will no longer command attention.

Pushed aside, they will not regain the limelight.

Just as with 9/11, Charlie Hebdo and the Boston Marathon Bombing, the media was scripted with the story and ready to go the minute the happening was reported.

There is no investigation, no questioning, just the media moving in lockstep with the scripted official story.

Again the perpetrators conveniently leave their ID. Again the attack coincides with an official drill of the attack. No matter how transparent the false flag attack and the agendas served by it, patriotism whipped to a frenzy blinds people to the reality. [2]

The French equivalent of MI6 and CIA is the Direction générale de la sécurité extérieure.

Held as part of the 2nd Annual Ethos and Profession of Intelligence Conference, co-hosted by the Central Intelligence Agency and the George Washington University. Held on October 27, 2015.

4. Selective Grief and Outrage: ISIS Attack on Lebanon Ignored by the Whole World

Chris Graham, New Matilda publisher, the editor of the independent Australian news and analysis site, pointed out that:

“As France enters yet another period of mourning, Lebanon is just emerging from one. Not that you probably heard anything about it.”

The journalist noted that unlike the attacks in Paris, events in Lebanon, which:

“not counting Israel’s assaults on Lebanon… represent the deadliest bombings in Beirut since the Lebanese civil war ended more than two decades ago,” received “no tweet from [Australian Prime Minister] Malcolm Turnbull, no social media statement from Barack Obama, no live media blogs from Western media, no wall-to-wall media coverage. And no twitter hashtags from Australians in solidarity with the Lebanese.”

Ultimately, Graham suggested that while “solidarity with, and compassion for, the French is [undoubtedly] a good thing… solidarity and compassion for the victims of terrorism everywhere is even better, in particular those who’ve fallen victim to the terrorism sponsored in all our names.” [4]

5. The Jewish owner of Le Bataclan who bought it in 1976 sold it 2 months before the attacks and flew to Israel

Pascal Laloux, one of the theater’s former owners, said Saturday that the theater was “sold in September after 40 years.”

His brother Joel, the co-owner, told Channel 2 that they sold the theater on September 11 [the 14th anniversary of the 9/11 attacks — what a strange “coincidence”!], and he recently immigrated to Israel. [5]

“He was white, clean shaven and had dark hair neatly trimmed. He was dressed all in black accept for a red scarf. The shooter was aged about 35 and had an extremely muscular build, which you could tell from the size of his arms. He looked like a weightlifter. He was not wearing gloves and his face was expressionless as he walked towards the bar.”

Why don’t we have Police sketches of the two shooters? Why aren’t they broadcasted on TV? Is it because the attackers are MOSSAD/ CIA SpecOps? [9]

“10,000 more soldiers will be deployed in France, joining the 7,000 already deployed after the January Charlie Hebdo killings, which took 17 lives.

Following the 11/13 attacks, which have thus far killed 132 people and injured hundreds more, 4,000 to 5,000 troops will patrol the streets of Paris in a drastically expanded military presence in the French capital.” [8] 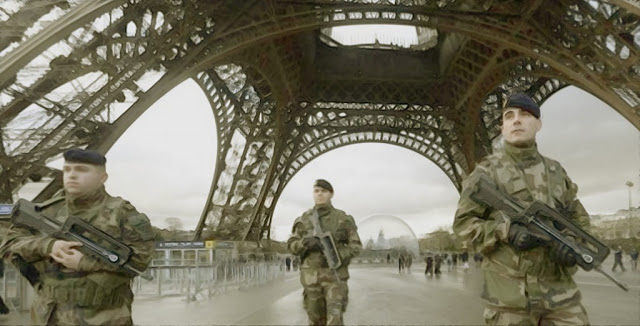 The global Police State that we all feared, is fastly turning out to be an Army State.

Problem-Reaction-Solution at its finest. They have created a Problem, we have Reacted (“what are you going to do about it?”) and now they are implementing their pre-planned “Solution“: the deployment of armed soldiers on the streets to “protect” us from an inexisten enemy and the intensification of bombardments in Syria.

Deploying thousands of soldiers on the streets would have not been possible without these staged events. The people would have protested — now, everyone is silent. We are scared and obedient little slaves, just how the masters like us.

Also, bombing a sovereign country — Syria, — using the taxpayer’s money, would have been met with criticism and revolt. Now, everyone is silent. We feel avenged, without realizing that on another part of the world, bombs are tormenting a nation and its people.

Sure, we are bombing ISIS/ISIL, though somehow, it took NATO about 18 months to make no progress whatsoever — until the Russians terminated around 40% of their infrastructure in just a week. With these obviously staged terror events, our leaders want to show us that ISIS is still strong and needs to be dealt with.

The truth is, ISIS was created by the CIA and MOSSAD, just as they created Al Qaeda and Osama bin Laden before, and even after all the hundreds of millions pumped by USA in training and arming “moderates,” their fighting power was fairly limited.

Sure, they were good enough to fight Assad in Syria, but on a global scale, they are non-existent. These mercenary cockroaches never had the knowledge and technology to carry out cyber attacks of the magnitude presented on #1.

And after the Russians have bombed them for weeks, their power is abysmal.

Yet, these events happened and only a handful of people seem interested to ask the right questions. The rest of the world is silent.