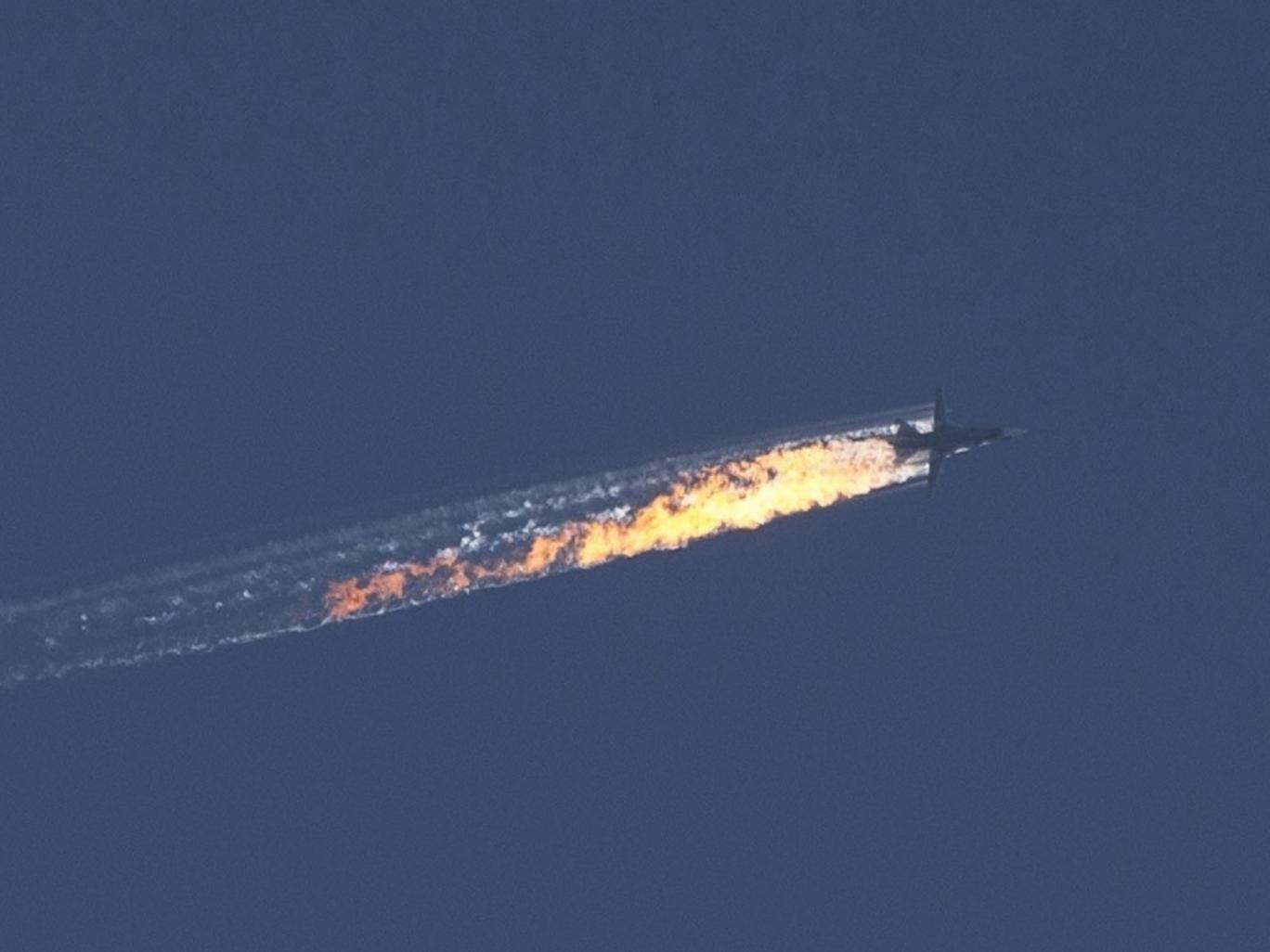 Turkey Downed A Russian Plane — Putin: ‘Stab in the Back by Terrorist Accomplices’

A Russian Su-fighter jet was just shot down in Syria, and according to the Russian Defense Ministry, the plane had not even violated Turkish airspace and was flying at an altitude of 6,000 meters.

Russian President Vladimir Putin called the downing of the Russian plane a “stab in the back that will have serious consequences for Russia’s relationship with Turkey.” (source)

Another case, as is often with war, of one side saying something and the other side saying another. Who are we to believe? Well, the American media has been caught dishing out lies on multiple occasions, so many times in fact that it’s hard to even know where to begin. 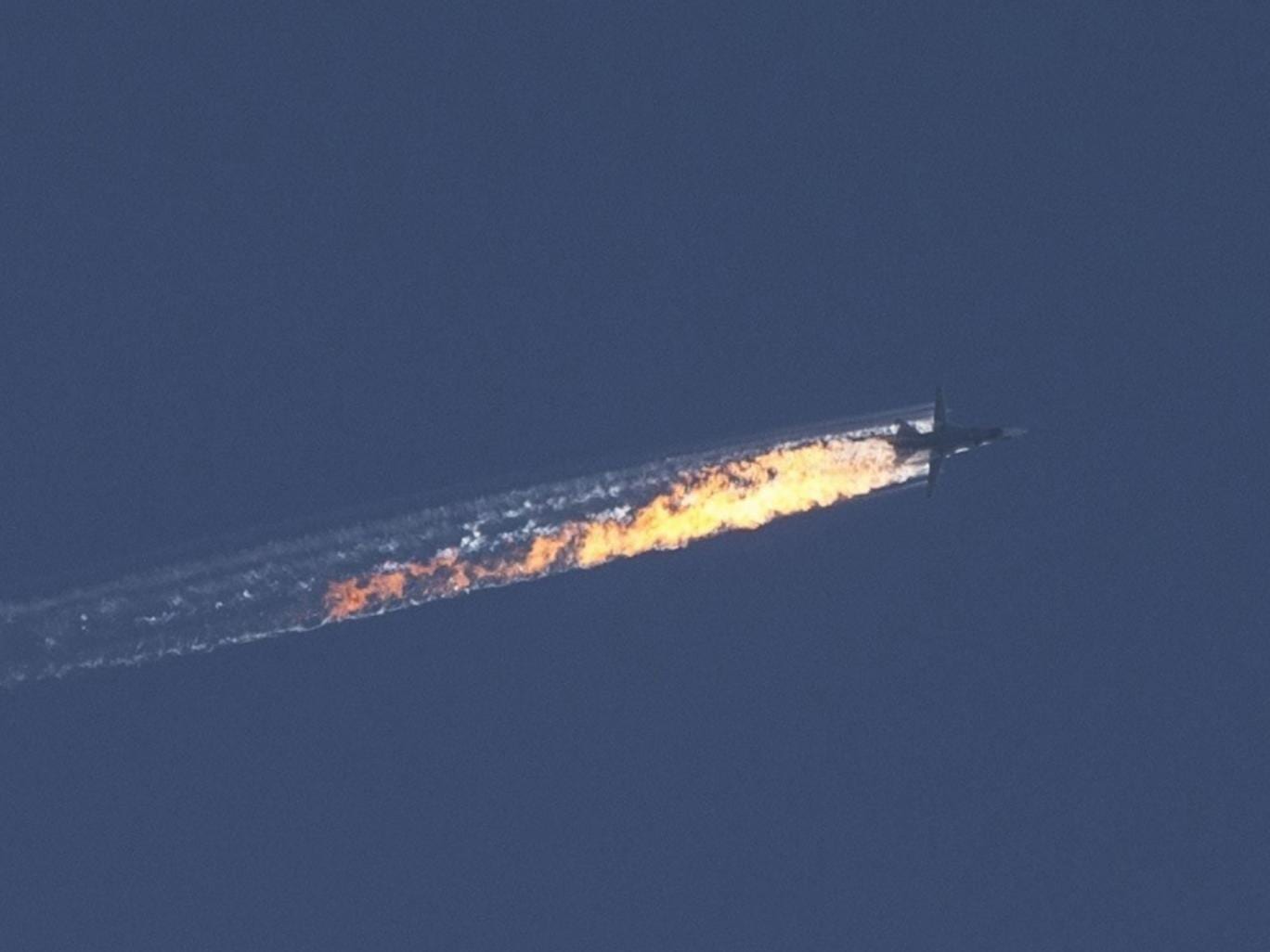 What’s even more troubling is the fact that you have millions of people who watch television, and believe what they are being told without every doing their own research.

The latest example comes from a video of Russian attacks on ISIS positions. These were portrayed by American news media outlets as American attacks.

Another recent example was the supposed bombing of a Syrian hospital by Russian forces, when there was absolutely no proof that this actually happened. The American media simply had a number of reports on T.V., saying that Russian forces did this.

“The conscious and intelligent manipulation of the organized habits and opinions of the masses is an important element in democratic society. Those who manipulate this unseen mechanism of society constitute an invisible government which is the true ruling power of our country. We are governed, our minds are molded, our tastes formed, our ideas suggested, largely by men we have never heard of.” – Edward Bernays (considered by many to be the father of public relations), Propaganda, 1928 (note that Bernays’ book, Propaganda, begins with the above quote).

As many of you reading this already know, the global war on terrorism is seemingly a complete fraud. People are dying not because a rogue terrorist group is killing them, but because various countries and the elitist hands that puppet them are paying mercenaries a large amount of money to represent themselves as ‘ISIS.’

It’s no different than Al-Qaeda and 9/11, a United States initiative, used to justify the infiltration of Iraq in the name of national defence, when the events themselves were fabricated in order to persuade the masses to accept this infiltration, at the same time boosting a false sense of patriotism.

If all of this activity is a result of the Western military alliance, and Turkey is part of that alliance well, need I say more? This is precisely why Putin is calling them accomplices of terrorists.

“This incident stands out against the usual fight against terrorism. Our troops are fighting heroically against terrorists, risking their lives. But the loss we suffered today came from a stab in the back delivered by accomplices of the terrorists.” (source)

Putin: Downing of Russian jet over Syria stab in the back
‘This incident stands out against the usual fight against terrorism. Our troops are fighting heroically against terrorists, risking their lives. But the loss we suffered today came from a stab in the back delivered by accomplices of the terrorists.’ Full Putin’s comment: http://on.rt.com/6xfi
Posted by RT Play on Tuesday, November 24, 2015

I regularly use this quote and I will use it again, it comes from prominent author and Canadian economist Dr. Michel Choissudovsky, who is the University of Ottawa’s Emeritus Professor of Economics, spoken at the International Conference on the New World Order, which was organized and sponsored by the Perdana Global Peace Foundation.

“We are dealing with a criminal undertaking at a global level … and there is an ongoing war, it is led by the United States, it may be carried out by a number of proxy countries, which are obeying orders from Washington … The global war on terrorism is a US undertaking, which is fake, it’s based on fake premises.

“It tells us that somehow America and the Western world are going after a fictitious enemy, the Islamic state, when in fact the Islamic state is fully supported and financed by the Western military alliance and America’s allies in the Persian Gulf. … They say Muslims are terrorists, but it just so happens that terrorists are Made in America. They’re not the product of Muslim society, and that should be abundantly clear to everyone on this floor. … The global war on terrorism is a fabrication, a big lie and a crime against humanity.” (source) (source)

The Bigger Picture. What Is Happening Here?

I often ask myself, what is going on here. I believe that if you follow the money, it will paint a clearer picture when it comes to the activities of war, and geopolitical relations in general.

Wars are perpetuated, fabricated and fought under false premises using human capital to do ‘their’ (whoever they are) dirty work.

Although there is no doubt in my mind that Russia is the ‘good’ guy here, a country that the United States and their allies are having trouble infiltrating and taking over.

The United States (and allies) have done this with so many countries, just look at the middle East. These plans have been in the making for a long time, including what is happening in Syria.

“I guess it’s like we don’t know what to do about terrorists but, we’ve got a good military and we can take down governments. I guess if the only tool you have is a hammer every problem has to look like a nail.”


Who is pulling these strings? It seems to be the U.S. government and their allies, but what about the hidden hand?

“There exists a shadowy government with its own Air Force, its own Navy, its own fundraising mechanism, and the ability to pursue its own ideas of the national interest, free from all checks and balances, and free from the law itself.” (source) – Highest Ranking Asian-American politician in United States history.

President Roosevelt said that there is an invisible government owing no allegiance and acknowledges no responsibility to the people, and a number of others have done the same.

I’ve often wondered if this same hidden hand is puppeteering Russia and their allies as well, and if all of this is one big fraud, leading up to a World War III that’s based on fake premises. Who knows?

What is clear is that the west and their allies are indeed taking over the world, establishing military bases all over the planet in multiple countries. They have been taking down governments by creating situations in those countries that are used to justify these take overs.

We often believe propaganda only existed during World War II, but the world is still at war, and there is more propaganda today than ever before.

How do we stop this? Well, it’s the ones pulling the triggers and giving the orders that have to stop participating, and that can only happen once they wake up, like the gentlemen in the article linked below did.

We, as humans, have to refuse to be used as pawns in these war games.

Everything You Know About Thanksgiving is Wrong Previous post
Religious Children are Meaner and More Punitive than Secular Kids, Study Finds Next post