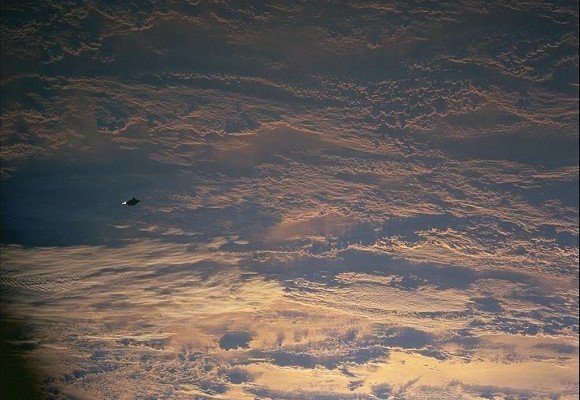 *The photo used in this article comes directly from The Gateway to Astronaut Photography of Earth, a government website operated by NASA at the Earth Sciences and Image Analysis department at Lyndon B. Johnson Space Center.

They are responsible for training the astronauts in Earth observations, cataloging and archiving the photographs that astronauts take from space using hand held cameras and more. It is one of several mysterious objects that have been photographed by astronauts from space.

It’s known as the “Black Knight satellite,” and although it wasn’t confirmed by scientists until 1932, Serbian inventor and genius Nikola Tesla discovered it in 1899 while in his Colorado Springs laboratory, hearing strange rhythmic sounds on his radio receiver. 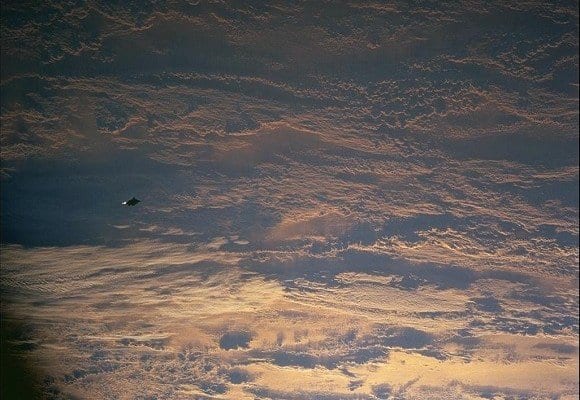 The confirmation in 1932 gave birth to the field of radio astronomy, which is now used to decode and detect messages from distant stars and other mysterious celestial sources. Tesla writes:

“I can never forget the first sensations I experienced when it dawned upon me that I had observed something possibly of incalculable consequences to mankind. I felt as though I were present at the birth of a new knowledge or the revelation of a great truth. Even now, at times, I can vividly recall the incident, and see my apparatus as though it were actually before me.

“My first observations positively terrified me, as there was present in them something mysterious, not to say supernatural, and I was alone in my laboratory at night; but at that time the idea of these disturbances being intelligently controlled signals did not yet present itself to me.

“The changes I noted were taking place periodically, and with such a clear suggestion of number and order that they were not traceable to any cause then known to me. I was familiar, of course, with such electrical disturbances as are produced by the sun, Aurora Borealis and earth currents, and I was as sure as I could be of any fact that these variations were due to none of these causes.

“The nature of my experiments precluded the possibility of the changes being produced by atmospheric disturbances, as has been rashly asserted by some. It was some time afterward when the thought flashed upon my mind that the disturbances I had observed might be due to an intelligent control.

“Although I could not decipher their meaning, it was impossible for me to think of them as having been entirely accidental. The feeling is constantly growing on me that I had been the first to hear the greeting of one planet to another. … I was not merely beholding a vision, but had caught sight of a great and profound truth.” – Nikola Tesla, from his article “Talking With Planets” (source)

According to the American Physical Society Physics, Tesla concluded that these signals, or this strange unnatural object they originate from, was indeed extraterrestrial, or an effort to “communicate with Earth by alien beings.”

This was one of multiple incidents in which Telsa intercepted what he thought were intelligent signals from space. He states that even the simplest form of communication (such as the interchange of numbers) could represent a form of intelligible transmission from extraterrestrials.

When I came across that information, I instantly thought about this NSA document, which is one example of strange messages that come from space, as elaborated on below.

Today, we know for sure that these signals are of extraterrestrial origin, but it’s assumed that they are radio waves from planets, comets, stars, or galaxies — not ‘ET.’

More than 30 years after the confirmation in 1932, a graduate student by the name of Jocelyn Bell noticed some strange data coming from her telescope at the Mullard Radio Astronomy Observatory (MRAO).

After a few weeks, she noticed that the signal being produced could not have originated from any known natural source, and she (and her team) ruled out every conceivable explanation, such as multiple sources of human interference, other radio astronomers, radar reflected off the moon, orbiting satellites, television signals, and more. Nothing could explain these strange signals.

She eventually published a paper in the scientific journal Nature, despite the fact that the source of the sound, though they knew it was artificial, had not been determined.

These announcements caused quite a commotion at the time, and today it is common for strange signals, determined to be coming from ‘non-natural’ sources, to be detected. But who knows what they are?

Just last year, strange radio wave flashes from far outside of our Milky Way galaxy (or in it) have scientists completely confused; you can read more about that here.

I just want to make it clear that this type of stuff is always going on.

There are hundreds, if not thousands, of objects floating around in Earth’s orbit — commonly referred to as space junk or space debris. In fact, the space around the Earth is quite polluted, so this satellite is not something that would be easily detectable to astronomers who don’t know what they are looking for.

Apparently, and there is no way to verify this, the object comes and goes, entering in and out of our planets orbit at random.

It’s interesting to note that USMC Major Donald E. Keyhoe, the longtime director of the government’s National Investigative Committee on Aerial Phenomena (NICAP), claimed that the US Navy was aware of the presence of two strange objects orbiting the planet in 1954.

This was well before the launch of the first human satellite or object into space. Keyhoe and former CIA Director Roscoe Hillenkoetter were big proponents that UFOs be taken seriously by the military.

These issues became evident to the public when President H. Truman came on television and officially acknowledged the presence of UFOs and admitted that the issue is always discussed at military conferences. (source)

In 1960. the Pentagon tracked a dark ‘satellite that the Pentagon said may be of Soviet Origin, tumbled through space in an orbit of mystery, and this has happened on multiple occasions…(source)

Since Truman’s announcements, members of the Black Budget world have taken over, leaving the government completely in the dark. This was also made evident when John Podesta, former White House Chief of Staff and current head of Hilary Clinton’s presidential campaign, said that not being able to secure the disclosure of UFO files was his biggest regret:

“I’m skeptical about many things, including the notion that government always knows best, and that the people can’t be trusted with the truth. The time to pull the curtain back on this subject is long overdue.

“We have statements from the most credible sources – those in a position to know – about a fascinating phenomenon, the nature of which is yet to be determined.” – Taken from Leslie Kean’s 2010 New York Times bestseller, UFOs: Generals, Pilots, And Government Officials Go On The Record

As far as the military involvement with UFOs more than 60 years later goes, we now know that these objects are commonly tracked on ground and air radar, as well as visually confirmed by pilots.

You can read more about that and look at a few (out of thousands) of documents in this heavily sourced article linked below:

“This Is What Happens When A “UFO” Is Tracked On Military Radar.”

I just want to make it clear that strange objects in our atmosphere, and in/or near Earth’s orbit, are detected often, yet we have no idea what they are.

“This thing has gotten so highly-classified… it is just impossible to get anything on it. I have no idea who controls the flow of need-to-know because, frankly, I was told in such an emphatic way that it was none of my business that I’ve never tried to make it to be my business since. I have been interested in this subject for a long time and I do know that whatever the Air Force has on the subject is going to remain highly classified.” – Senator Barry Goldwater, Chairman of the Senate Intelligence Committee (source)

It’s interesting that Pepsi, who I consider to be the maker of some of the deadliest substances in the world, most (if not all) of which contribute to various human health ailments, recently used Tesla’s discovery of this object in a short film.

I thought it was relevant to share, given that the major shares in Pepsi are held by the big banks and major financial institutions, who I believe are behind the UFO/extraterrestrial cover-up today.

This cover-up, for anybody who has researched this topic, has gone well beyond the government, involving people at the top who control the cash flow. Most likely, it’s the private government contractors like Lockheed Martin and Boeing who know about it, along with those atop the financial pyramid.

“We already have the means to travel among the stars, but these technologies are locked up in black projects, and it would take an act of God to ever get them out to benefit humanity. Anything you can imagine, we already know how to do it.” – Ben Rich, 2nd Director of Lockheed Skunkworks

I am going to refrain from going into an analysis of this video, just thought it would be relevant to share:

For anybody who has done extensive research on the UFO phenomenon, it is not far-fetched at all to fathom an extraterrestrial object entering into Earth’s orbit, be it a satellite or a ‘ship’ from another planet.

“There’s another way, whether it’s wormholes or warping space, there’s got to be a way to generate energy so that you can pull it out of the vacuum, and the fact that they’re here shows us that they found a way.” (source) – Jack Kasher, Ph.D, Professor Emeritus of Physics, University of Nebraska

“It is my thesis that flying saucers are real and that they are space ships from another solar system. I think that they possibly are manned by intelligent observers who are members of a race that may have been investigating our Earth for centuries.” – Herman Oberth, one of the founding fathers of rocketry and astronautics (source)