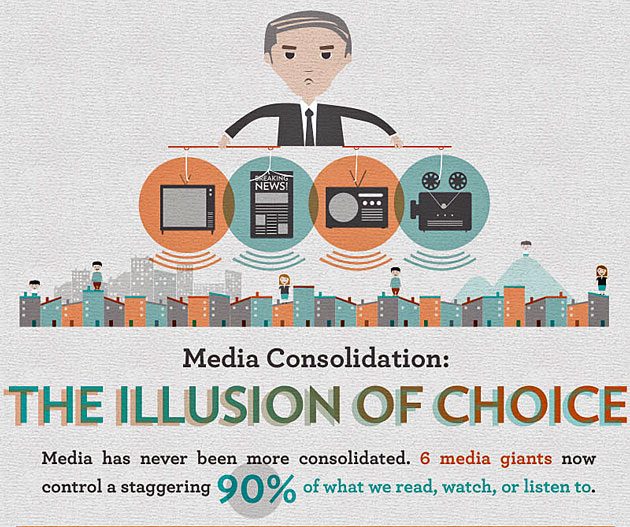 The Illusion of Choice: 90% of American Media Controlled by Only 6 Corporations

It is worth repeating again and again that the bulk of America’s mainline media is owned and controlled by a mere 6 corporations.

This, of course, means that unless you’re already consciously avoiding these mainline media sources, then most of the news and entertainment that makes it onto your screen and into your mind comes from a small pool of corporate sources, all of which play important roles in delivering propaganda, social programming and perpetual crisis narratives to the public. 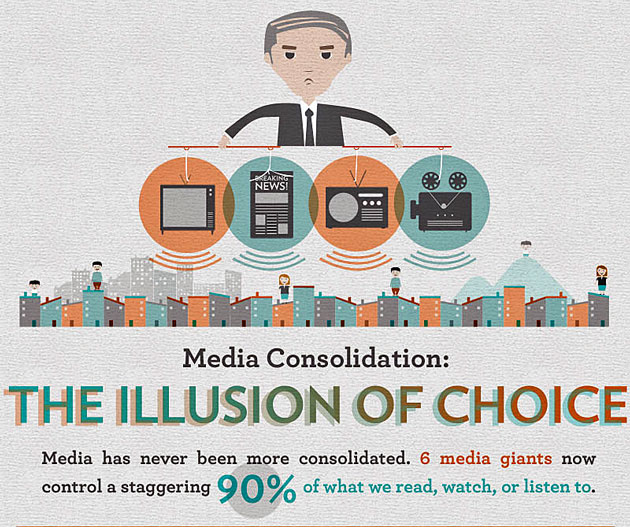 All are corporations that have their own shady histories, dealings and suspicious actors. Disney being widely regarded as an occult enterprise aimed at warping the minds of children with disturbing subliminal imagery.


One of these companies is also the 12th largest US military defense contractor, so it’s no surprise that so much of our entertainment centers around the glorification of war and violence.

By surveying what is available for consumption in the mass media, it is easy to see what type of society these 6 corporations are helping to construct.

They have the power to warp reality by calling staged shows ‘reality’ shows. Ideas which don’t support mainstream narratives and the consumer agenda are omitted, and stories about independent people over-coming strife without dependence on government are seldom if ever elevated.

Read: 11 Tactics Used by the Mainstream Media to Manufacture Consent for the Oligarchy

The promotion of shallow, materialistic, ego-centric values, and the obvious dumbing down of the American population is coming from these 6 corporations. Think about that.

These are the companies that glorify consumption, obedience, ignorance, the hyper-sexualization of youth, the glorification of war and government surveillance, and so on. The advertisers that support these media companies have tremendous sway over what makes it on the airwaves. They help to control public perception.

The bottom line is that corporate media is a behemoth of special interests and mind controllers. So much of the human story is omitted in this capitalistic, for-profit environment scheme like this, which is why now more than ever the independent, alternative media is such a gem for human kind.

The info-graphic below was produced in 2011 by FrugalDad.com, and although there have been some changes to the information since then, the landscape of American media is well represented here. Compare today to 1983 when the industry was occupied by some 50 independent media companies.

NOTE: This infographic is from last year and is missing some key transactions. GE does not own NBC (or Comcast or any media) anymore. So that 6th company is now Comcast. And Time Warner doesn’t own AOL, so Huffington Post isn’t affiliated with them.

With such tremendous global reach in all forms of media communication, these corporations help to shape our world by providing coverage of our lives, analyses of our world, entertainment to pass our time and inspire our minds, and even distraction and occupation for our children.