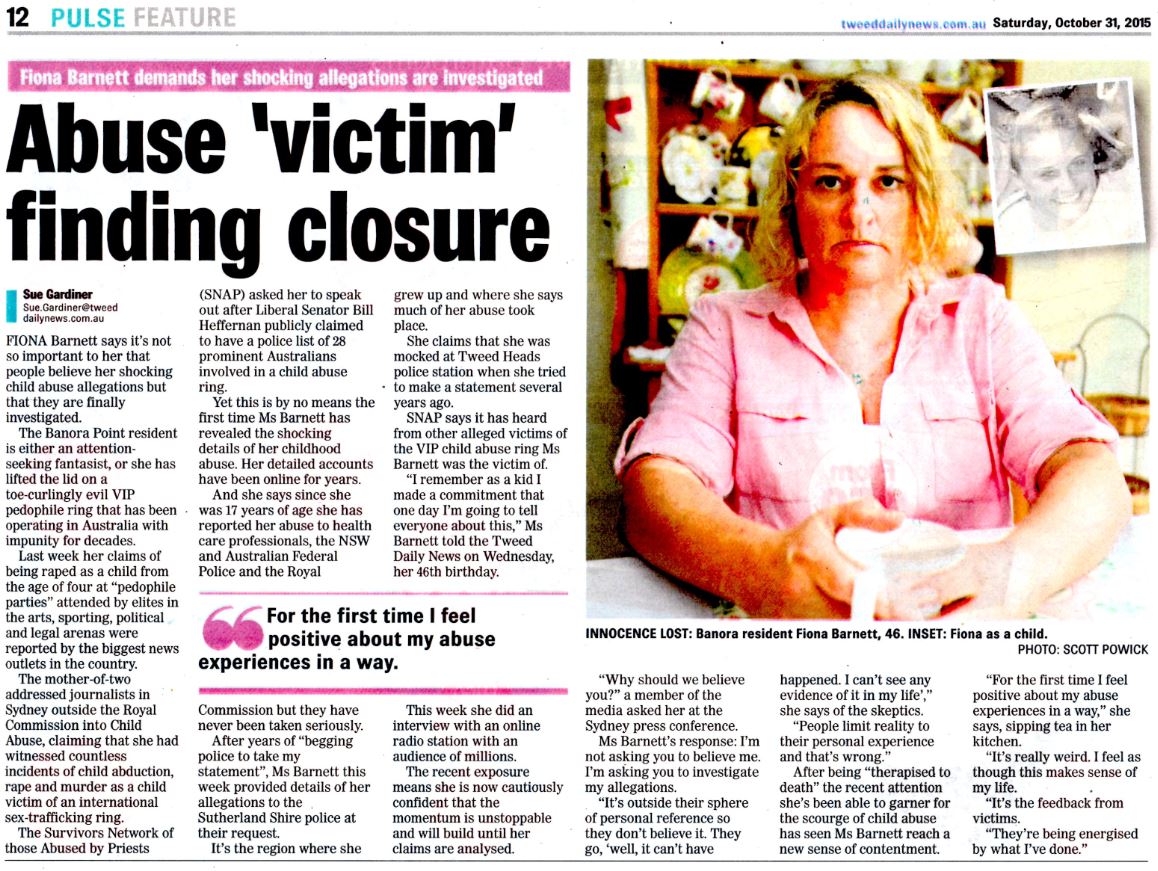 Satanic Pedophilia Network Exposed in Australia — It Starts at the TOP, Just Like in the USA and UK

The New World Order cult that rules the world administers a Satanic Pedophilia Network, including top-level politicians like Australian Prime Ministers and US Presidents.

The Satanic Pedophilia Network which underlies the New World Order was again exposed in the last few months by another brave whistleblower. Australian woman Fiona Barnett showed a ton of courage in going public at a Sydney press conference in October 2015 and naming names.

Fiona, a former victim of Satanic ritual abuse and part of an international VIP pedophile ring, not only exposed the existence of the Satanic pedophilia network and its international child trafficking ring, but actually named 3 former Australian Prime Ministers and 1 former US President as perpetrators.

She reveals that this network, composed of famous actors, celebrities, judges, politicians and other high-flyers, has infiltrated all the key organizations and institutions in Australia – just as it has in the US and Britain. 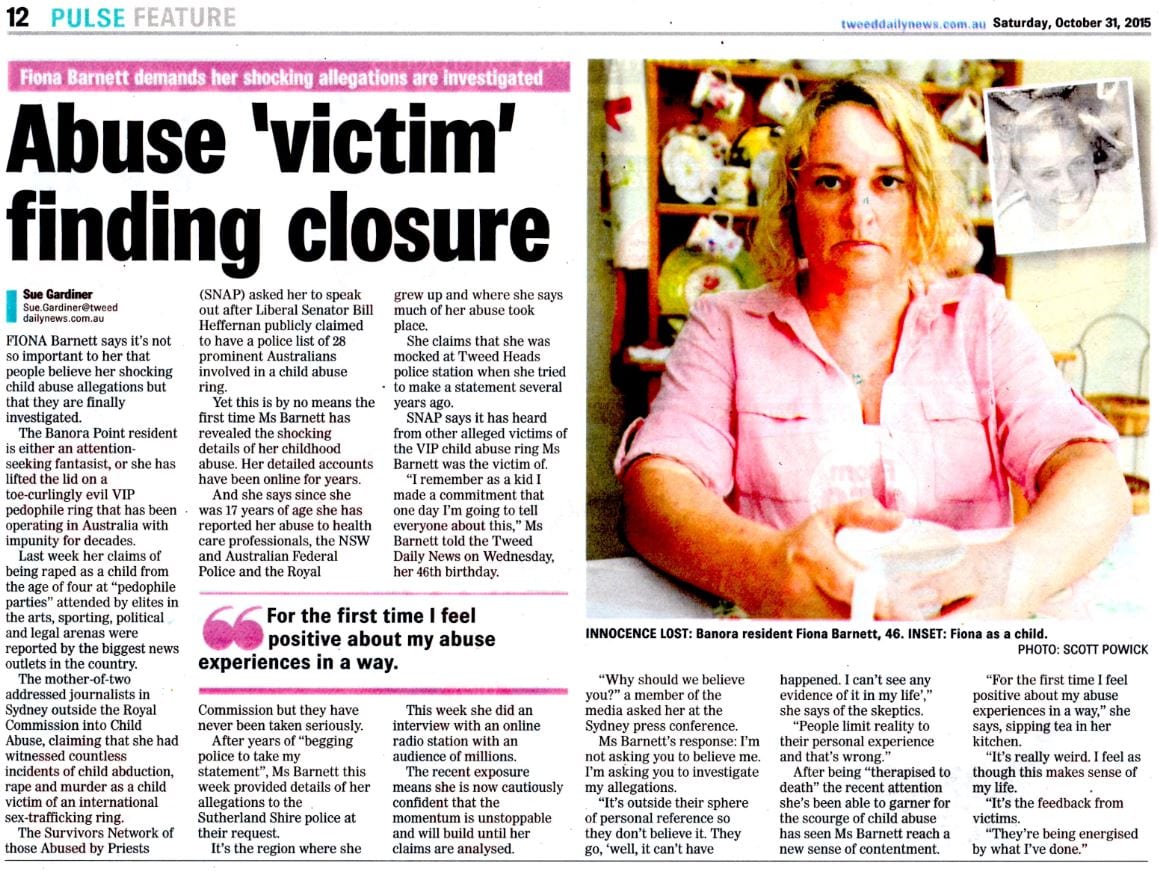 Warning: what follows is graphic and requires a great deal of maturity to swallow, but if you’re interested in the real truth of what’s going on in the world, read on.

Fiona saw it all – Satanic ritual, rape, torture and murder – but actually says “the way I’ve been treated for reporting the crimes I’ve witnessed and experienced has been far worse than my original abuse experiences.”

That speaks volumes about people’s collective denial and amnesia, doesn’t it?

Pedophiles Running Rampant Down Under

Fiona proclaims that Australia is a pedophile haven. She explains how Australia took in a large number of Nazi war criminals, including her own step-grandparents. She was introduced by her own family to an international child trafficking pedophile ring based in Sydney. 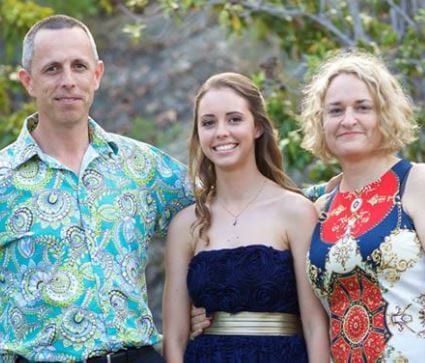 Fiona Barnett, right, with her family.

Some victims are kidnapped off the street, some are “bred” for it (without ever getting birth certificates – more on this later) and some are brought into it through multi-generational abuse. These latter ones are trained and expected to become the perpetrators and future administrators of it.

Fiona has had flashbacks to being abused as young as the age of 2. Later on, when she was still a little girl, she was dropped off at VIP parties, instructed to say “the starchild is here”, then watch as famous politicians, actors and celebrities snorted cocaine, raped her, had sex with each other, then pretended to drown her in a pool.

She wasn’t just sexually abused and raped; she also suffered Satanic ritual abuse in the form of torture (e.g. suffering cattle prodding electroshock to cause disassociation).

Fiona names the names of the people who sexually assaulted, raped and tortured her:

– Antony Kidman (actress Nicole Kidman’s father) (Nicole Kidman is a victim of the ring too, but was nasty towards fellow victim Fiona);

Barnett also mentions the brave Aussie politician Franca Arena, who got up in Parliament under parliamentary privilege and said there is a large pedophile ring involving politicians, judges, doctors and media moguls.

She also recalls being at Bohemian Grove. On one occasion she was in a pink bubble room and raped. On another occasion she had to participate in “Teddy Bear’s Picnic” a child rape hunt party, where children were hunted like animals and raped (as also happened to Kathy Collins and Cathy O’Brien).

Read: Australian Judge: Incest & Pedophilia ‘May be Accepted’ by Society

Witness at a Satanic Ritual in Bathurst, NSW, Australia, 1985

In this video, Barnett talks about being present at a real Satanic ritual with some of Australia’s famous people – Kim Beazley (later to become Australian Labour Party and Opposition leader) and Richie Benaud (famous Australian cricket captain and sports commentator).

She reveals how Beazley and Benaud started the ritual by worshipping their Satanic gods, chanting “Baal”, “Lucifer”, “Satan”, “Son of the Morning” and other such appellations. 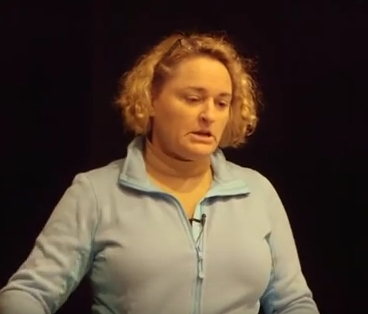 She then witnessed them ceremoniously killing a pregnant mother (a “breeder” to the Satanists) in the center of the circle.

After that, they pulled out the unborn child, chopped it up with a knife, put it on a gold platter, and proceed to do a type of dark communion or Eucharist.

(Barnett mentions here that the Catholic Church communion is based on this older Satanic version of a communion – in line with my article Are Parts of Organized Religion Satanic?)

After that, she states that several hypnotized children came forward like robots, who were probably mind controlled or completely dazed. Benaud came forward with a samurai sword and sliced off the head of each child.

Lastly, Beazley forced her to take a bite of one of the decapitated heads …

Why the Satanic Pedophilia Network?

Some may wondering at this point why I and many others are calling this the “Satanic Pedophilia Network” and not just the “Pedophilia Network“. The answer is simple: Satanism is most definitely involved in it – in fact, it is the driving force behind it.

Fiona herself mentions in this interview that some of the criminals who abused and raped her were “just” pedophiles, and she puts former Aussie PM Gough Whitlam in this category.

Others, however, worship a dark religion called Satanism which involves the summoning of dark forces (most probably the Reptilians and/or Archons, but that is the subject of other articles) through channeling and twisted rituals, allowing these dark forces to overtake them and use them.

Then, filled with this Satanic energy (such as during rituals at Bohemian Grove), these adherents commit all sorts of perverted acts such as rape, necrophilia, torture, murder, sacrifice and cannibalism.

Roughly speaking, at the lowest level, you have street gangs; next, you have organized crime and the mafia; next, you have recruits into the elite club; then, above that, you have “just” pedophiles (those who rape children but who have no Satanic connection); finally, at the very top, you have the elite VIPs who are full-fledged Satanists.

Fiona states that only bloodliners can make it to the top. These people come from the 13 or so Illumanti bloodlines (as exposed by Fritz Springmeier, David Icke and other researchers).

These bloodlines are revered as demigods; and the roughly 300 bloodlines or so below that can never make it to the top echelon. (Probably because they don’t have pure blood, i.e. “royal” or reptilian DNA, but again, subject for another article.)

The OTO, the Freemasons, Scientology, Catholic Church, the CIA, the Australian military and many many others are all branches of the same Satanic Pedophilia Network. It lies at the heart of the international child trafficking ring and the New World Order.


The World is Run by a Satanic Cult

It’s a tough and bitter pill to swallow, but we have to face the cold hard truth: the world is run by a Satanic cult, whose members have infiltrated the top layers and power centers of Australian, American and British society (and those of numerous other countries).

They are inter-related, and they are bound together by bloodlines and Satanism – with pedophilia, rape, murder, war and genocide to follow.

Fiona warns that every organization in Australia has been infiltrated, including hospitals, psychiatry, politics, child advocacy groups – everything.

The Satanists have even created a False Memory Foundation, a fake organization set up by pedophiles, to stop true victims from coming forward with their stories, by convincing people they didn’t really experience what they experienced.

Satanic black magic rules the world. Only when enough of us truly grasp the enormity, horror and shock of this fundamental truth – now exposed by a mountain of evidence and a ton of whistleblowers and victims – can we hope to heal it by bringing these psychopaths to justice and restoring some semblance of honesty, peace and freedom to our world.

By Makia Freeman, Guest writer, HumansAreFree.com / References:
Psychology Finally Reveals The Answer To Finding Your Soulmate Previous post
I Was in the Illuminati I’m Going to Tell You Everything — Shocking Expose Next post