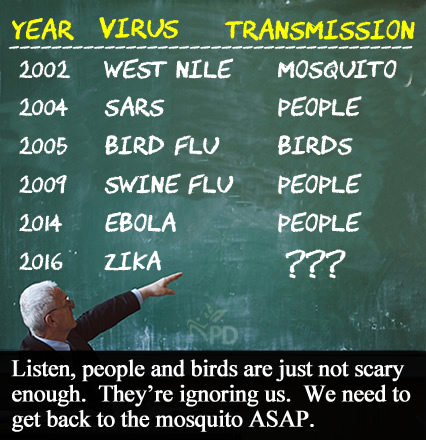 How many fear campaigns does it take before people start to submit to false declarations of emergencies?

The answer is endless, because most of the world is catching on very quickly to the obvious and pathetic attempts to shove fabricated pandemics down the throats of billions.

Zika has now been officially entered into the database of global disease fear mongering. The latest news from Hawaii has the ‘pineapple state’ declaring a state of emergency, despite zero cases transmitted of the virus. 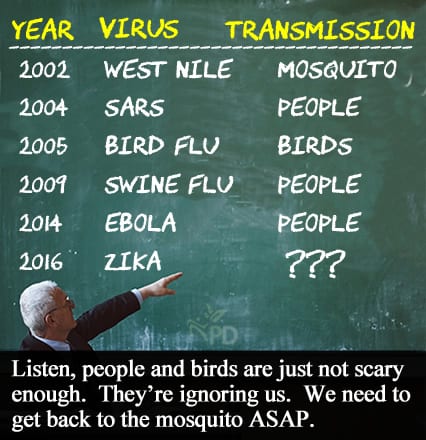 The end game is always the same–a jjab or drug that will be expeditiously developed to protect everybody and forcibly introduced to populations if necessary.

You can avoid people and birds, but you can’t avoid mosquitoes. They’re everywhere. What better and more convenient danger than mosquitoes passing viruses to humans?

What better way to create fear than to alarm populations through a worldwide threat that causes deformation in their children? Are people finally recognizing how these operations are designed to create terror?

That what we are being exposed to year after year, at strategic times of the year, in both mainstream and alternative education, news, entertainment, etc, is the repetition of fear through persuasive messages to condition?

Much of the focus around the “Zika virus” has centered around presumed cases in Brazil, but there is never any mention of all the contaminated water supplies, fumigation with lethal poisons, sanitation deficiencies and widespread use of pesticides banned in most of the world.

In a report by the Physicians in the Crop-Sprayed Towns (PCST), the group provided clear evidence that the area in which most of the infected persons were recorded, had been sprayed with a larvicide known to cause birth defects.

It is very easy to blame cases of microcephaly on the notion of a virus rather than the actual cause. How convenient that the chemical pyriproxyfen was added to the state of Pernambuco’s drinking-water reservoirs in 2014, by Brazil’s Ministry of Health in an botched effort to prevent the spread of the Zika-carrying mosquitoes.

A report from an Argentinian group of doctors called Medicos de Pueblos Fumigados or Doctors from Pesticide-Sprayed Towns, reveal:

“Previous Zika epidemics did not cause birth defects in newborns, despite infecting 75% of the population in those countries. Also, in other countries such as Colombia there are no records of microcephaly; however, there are plenty of Zika cases.”

Another report from a Brazilian association called Abrasco, noted that:

“Pyriproxyfen was introduced in the drinking water of the population… larvicide is a juvenile hormone analogue or juvenoid, with the mechanism of action of inhibiting the development of insect adult characteristics (e.g. wings, maturation of the reproductive organs and external genitalia), keeping with aspect immature (nymph or larva), that acts on endocrine disruption and is teratogenic and inhibits the formation of the adult insect.”

There has been a massive cover-up and incredible effort on behalf of the Brazilian government to show that Zika was present in all the microcephaly cases. The real question is who launched the fake epidemic story in Brazil?

There have been no locally transmitted cases of the Zika virus in Hawaii, yet Gov. David Ige recently declared a state of emergency in an attempt to control a virus that is not even a problem in that state.

Due to the state’s dengue fever outbreak on Hawaii’s Big Island, where there were more than 250 confirmed cases, officials are playing paranoid under the assumption that other vector borne diseases could cause the same problems.

Like other disease proclamations, it simply gives the state more power to take measures, including the ability to spray pesticides regardless of a homeowner’s wishes.

“One of the things that this emergency declaration from the governor will allow us to do is that we can in fact enforce that we will come and take care of mosquitoes on a property that someone is refusing, because it is a public health emergency,” said Virginia Pressler, department of health director.

Should the U.S. declare a national emergency, the government can potentially enforce laws designed for dealing with deadly pandemics such as bringing about mandatory vaccination programs.

They include International Health Regulations under the WHO, National Emergencies Act, National Security and Homeland Security Presidential Directives, and the Model State Emergency Health Powers Act.

One of the problems with the promotion of potential disease threats is that officials do not collect data on the spread of these boogeyman viruses based on accurate systematic lab confirmation.

They are always based on huge assumptions. Both the WHO and CDC claim that by employing their monitoring standards on outbreaks from different parts of the world, they are able to obtain sufficient information to make tentative conclusions about how these viruses may evolve.

Much of their clever phrasing is convincing enough to conceal the fact that all their disease policies on response and preparation recommendations are based on pure speculation and junk science which become very apparent and prevalent in policy response.

Fear of invisible threats is tearing our apart our society. In the past, fear has engendered solidarity, but today it throws wedges between all of humanity. This isolation, in turn, renders the public ever more fearful.

What’s more, media outlets, politicians, modern medicine and businesses all have learned to capitalize on this distinctly modern sense of dread, and thus profit from finding ways to cultivate the boogeyman.

Until we find a way to see through this generated fear, we’ll live at the mercy of these emotional entrepreneurs — and in doing so, be party to the personal, cultural, and political consequences.