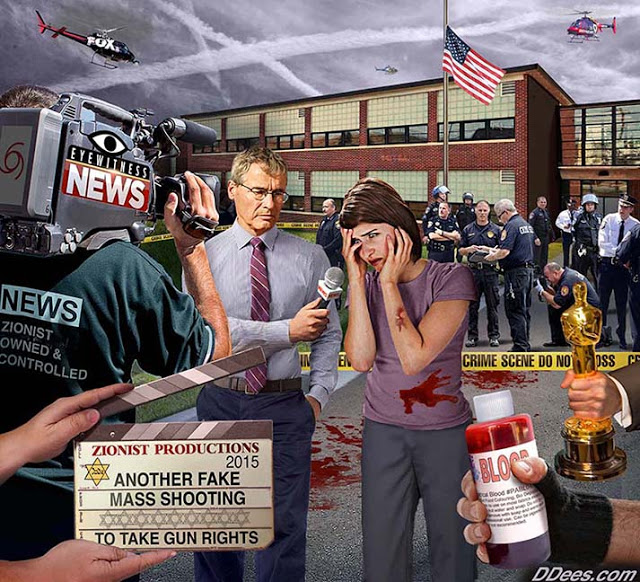 Do Americans Live in a False Reality Created by Orchestrated Events?

Most people who are aware and capable of thought have given up on what is called the “mainstream media.”

The presstitutes have destroyed their credibility by helping Washington to lie —“Saddam Hussein’s weapons of mass destruction,” “Iranian nukes,” “Assad’s use of chemical weapons,” “Russian invasion of Ukraine,” and so forth.

The “mainstream media” has also destroyed its credibility by its complete acceptance of whatever government authorities say about alleged “terrorist events,” such as 9/11 and Boston Marathon Bombing, or alleged mass shootings such as Sandy Hook and San Bernardino. 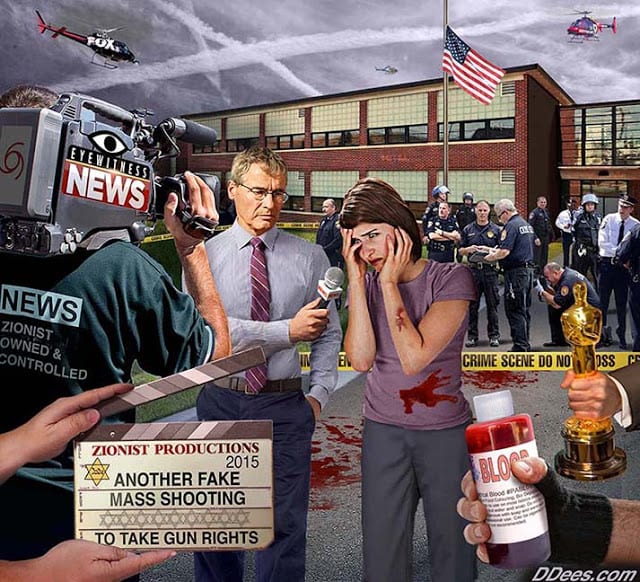 Despite glaring inconsistencies, contradictions, and security failures that seem too unlikely to be believable, the “mainstream media” never asks questions or investigates. It merely reports as fact whatever authorities say.

The sign of a totalitarian or authoritarian state is a media that feels no responsibility to investigate and to find the truth, accepting the role of propagandist instead. The entire Western media has been in the propaganda mode for a long time.

In the US the transformation of journalists into propagandists was completed with the concentration of a diverse and independent media in six mega-corporations that are no longer run by journalists.

As a consequence, thoughtful and aware people increasingly rely on alternative media that does question, marshall facts, and offers analysis in place of an unbelievable official story line.

The prime example is 9/11. Large numbers of experts have destroyed the official story that has no factual evidence in its behalf.

However, even without the hard evidence that 9/11 truthers have provided, the official story gives itself away.

We are supposed to believe that a few terrorists with no technology beyond box cutters and no support from any government’s intelligence service were able to outwit the massive surveillance technology created by DARPA (Defense Advanced Research Projects Agency) and NSA (National Security Agency) and deal the most humiliating blow to a superpower ever delivered in human history.

Moreover, they were able to do this without the President of the United States, the US Congress, and the “mainstream media” demanding accountability for such a total failure of the high-tech national security state.

Instead of a White House led investigation of such a massive security failure, the White House resisted for more than one year any investigation whatsoever until finally giving in to demands from 9/11 families that could not be bought off and agreeing to a 9/11 Commission.

The Commission did not investigate but merely sat and wrote down the story told to it by the government.

Despite all of this, the presstitutes still repeat the official propaganda, and there remain enough gullible Americans to prevent accountability.

Competent historians know that false flag events are used to bring to fruition agendas that cannot otherwise be achieved.

9/11 gave the neoconservatives, who controlled the George W. Bush administration, the New Pearl Harbor that they said was necessary in order to launch their hegemonic military invasions of Muslim countries.

The Boston Marathon Bombing permitted a trial run of the American Police State, complete with shutting down a large American city, putting 10,000 armed troops and SWAT teams on the streets where the troops conducted house to house searches forcing the residents out of their homes at gunpoint.

This unprecedented operation was justified as necessary in order to locate one wounded 19 year old man, who clearly was a patsy.

There are so many anomalies in the Sandy Hook story that it has generated a cottage industry of skeptics. I agree that there are anomalies, but I don’t have the time to study the issue and come to my own conclusion. What I have noticed is that we are not given many good explanations of the anomalies.

For example, in this video made from the TV news coverage (please note that YouTube has removed ALL videos exposing the Sandy Hook false flag, but I have replaced the video with something similar hosted on Real.video):


The video’s creator makes a case that the person who is the grieving father who lost his son is the same person outfitted in SWAT clothes at Sandy Hook following the shooting. The person is identified as a known actor.

Now, it seems to me that this is easy to test. The grieving father is known, the actor is known, and the authorities have to know who the SWAT team member is.

If these three people, who can pass for one another, can be assembled in one room at the same time, we can dismiss the expose claimed in this one video.

However, if three separate people cannot be produced together, then we must ask why this deception, which raises questions about the entire story. You can watch the entire video or just skip to the 9:30 mark and observe what appears to be the same person in two different roles. 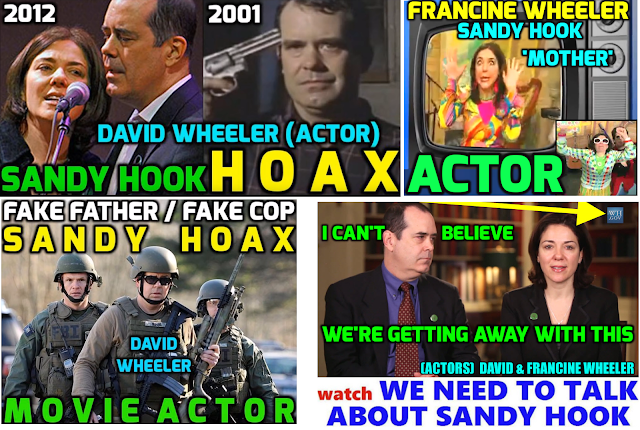 There is a book by Professor Jim Fetzer and Mike Palecek that says Sandy Hook was a FEMA drill to promote gun control and that no one died at Sandy Hook. The book was available on amazon.com but was suddenly banned. Why ban a book?

Here is a free download of the book: http://rense.com/general96/nobodydied.html I have not read the book and have no opinion.

I do know, however, that the police state that America is becoming certainly has a powerful interest in disarming the public. I also heard today a news report that people said to be parents of the dead children are bringing a lawsuit against the gun manufacturer, which is consistent with Fetzer’s claim.

Here is a Buzzsaw interview with Jim Fetzer. If the information Fetzer provides is correct, clearly the US government has an authoritarian agenda and is using orchestrated events to create a false reality for Americans in order to achieve the agenda.

He has had a National Science Foundation fellowship, and he has published more than 100 articles and 20 books on philosophy of science and philosophy of cognitive science.

He is an expert in artificial intelligence and computer science and founded the international journal Minds and Machines. In the late 1990s, Fetzer was asked to organize a symposium on philosophy of mind.

Fetzer’s frustration with less capable and less observant people increasingly shows, and this works to his disadvantage.

It seems to me that if the authorities behind the official Sandy Hook story are secure with the official story, they would jump on the opportunity to confront and disprove Fetzer’s facts.

Moreover, somewhere there must be photographs of the dead children, but, like the alleged large number of recordings by security cameras of an airliner hitting the Pentagon, no one has ever seen them. At least not that I know of.

What disturbs me is that no one in authority or in the mainstream media has any interest in checking the facts. Instead, those who raise awkward matters are dismissed as conspiracy theorists.

What is at issue is: whose conspiracy?

Recall William Binney. He developed the surveillance system used by NSA. When he saw that it was being used against the American people, he talked. But he had taken no documents with which to prove his claims, which saved him from successful prosecution but gave him no evidence for his claims.

This is why Edward Snowden took the documents and released them. Nevertheless, many see Snowden as a spy who stole national security secrets, not as a whistleblower warning us that the Constitution that protects us is being overthrown.

Treasury Secretary Paul O’Neill has said that overthrowing Saddam Hussein was the subject of the first cabinet meeting in the George W. Bush administration long before 9/11. He wrote it in a book and told it on CBS News’ 60 Minutes. CNN and other news stations reported it. But it had no effect.

Whistleblowers pay a high price. Many of them are in prison. Obama has prosecuted and imprisoned a record number. Once they are thrown in prison, the question becomes: “Who would believe a criminal?”

As for 9/11 all sorts of people have talked. Over 100 police, firemen and first responders have
reported hearing and experiencing a large number of explosions in the Twin Towers.

Maintenance personnel report experiencing massive explosions in the sub-basements prior to the building being hit by an airplane. None of this testimony has had any effect on the authorities behind the official story or on the presstitutes.

There are 2,300 architects and engineers who have written to Congress requesting a real investigation. Instead of the request being treated with the respect that 2,300 professionals deserve, the professionals are dismissed as “conspiracy theorists.”

An international panel of scientists have reported the presence of reacted and unreacted nanothermite in the dust of the World Trade Centers. They have offered their samples to government agencies and to scientists for confirmation. No one will touch it. The reason is clear.

Today science funding is heavily dependent on the federal government and on private companies that have federal contracts. Scientists understand that speaking out about 9/11 means the termination of their career.

The government has us where it wants us — powerless and disinformed. Most Americans are too uneducated to be able to tell the difference between a building falling down from asymetrical damage and one blowing up.

Mainstream journalists cannot question and investigate and keep their jobs. Scientists cannot speak out and continue to be funded.

Truth telling has been shoved off into the alternative Internet media where I would wager the government runs sites that proclaim wild conspiracies, the purpose of which is to discredit all skeptics.

About the author: Dr. Paul Craig Roberts was Assistant Secretary of the Treasury for Economic Policy and associate editor of the Wall Street Journal. He was columnist for Business Week, Scripps Howard News Service, and Creators Syndicate. He has had many university appointments. His internet columns have attracted a worldwide following.

Roberts’ latest books are The Failure of Laissez Faire Capitalism and Economic Dissolution of the West, How America Was Lost, and The Neoconservative Threat to World Order.

Chemtrail Flu — Have You Got It Yet? Previous post
Who Runs Snopes and is it Really the 'Tell-all Final Word'? Next post