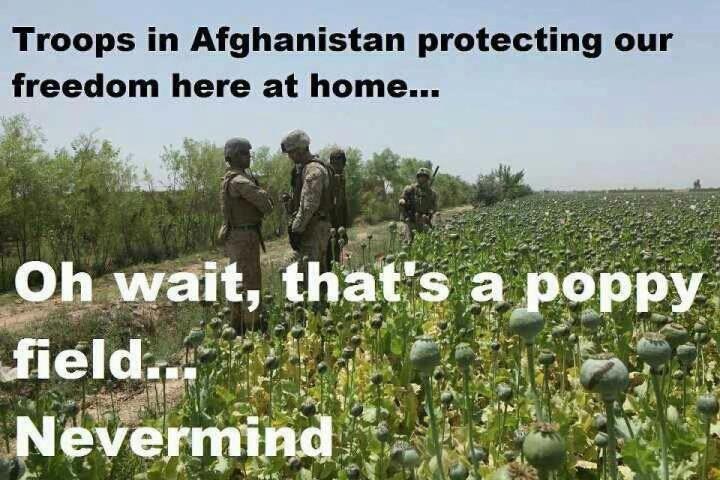 The occupation of Afghanistan has fallen off the media’s main stage in recent years, yet it remains one of the longest and debatably one of the most muddled military operations in US history.

Aside from the continued US presence, there remains an unaccountable and unjustifiable 108,000 military contractors of which the Pentagon cannot explain.

Those contractors now vastly outnumber American troops stationed there, according to a Congressional Research Service report. 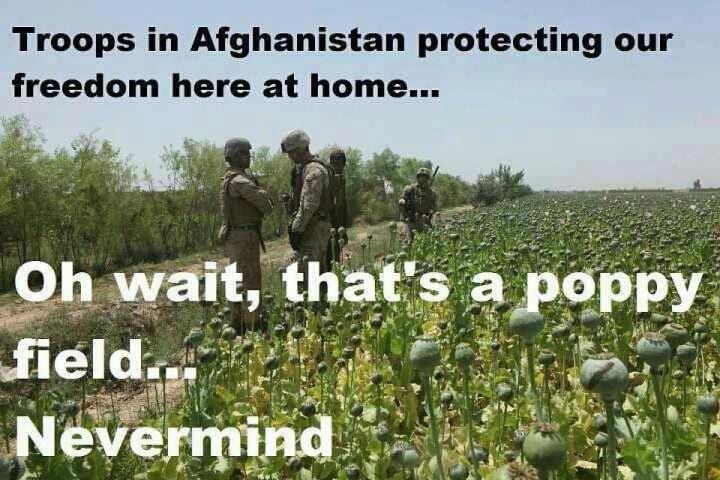 The United States became involved with the opium trade in Afghanistan during the Soviet invasion of 1979-1980.

As the destabilization of the Afghan government occurred, it withdrew from many of the outer provinces which allowed for warlords to occupy their opium fields and use its profits to acquire weapons and supplies.

While the US was supporting the Mujahideen, (who later became the Taliban, which then fractured into ISIS) the CIA chose to ignore the increasing opium trade.

“Afghan heroin has killed more than 1 million people worldwide since the ‘Operation Enduring Freedom’ began and over a trillion dollars has been invested into transnational organized crime from drug sales,” said Viktor Ivanov, at the conference on the drug situation in Afghanistan.

“Any impartial observer must admit the sad fact that the international community has failed to curb heroin production in Afghanistan since the start of NATO’s operation.”

Prior to NATO and the United States invading Afghanistan, opium production was banned by the Taliban, who saw it as anti-Islam. The trade continued however, yet at low production levels, leading to an all-time low in 2001; the year the US invaded Afghanistan.

Since the invasion however, Afghanistan now produces 90 percent of the world’s opium, most of it ending up in Western Europe or Russia, and reaching an all-time high in 2014 according to the United Nations Office on Drugs and Crime’s 2014 Afghan Opium Survey.

The all-time low in 2001 could be in part attributed to the war-torn country being unable to produce just about anything, yet the dramatic increase directly following the US occupation can not be misunderstood.

Data maintained by the United Nations shows that the estimated opium production in Afghanistan has increased 35-fold since the U.S.-led invasion, from 185 tons in 2001 to 6,400 last year.

According to the mainstream media prior to the US occupation of Afghanistan, the lucrative opium trade was being protected by Osama, the Taliban as well as the regional warlords; all in defiance of the “international community.”

The heroin business was said to be “filling the coffers of the Taliban.” Which to some degree was always a reality, despite their previous restrictions on the trade.

Yet today, with opium profits skyrocketing, the Taliban is profiting more than ever, which is wildly counterintuitive when considering the many statements made by the US in regards to how detrimental the Afghan Opium trade was to the “war on terrorism” and the world.

Recent U.N. estimates of Taliban annual earnings from the opium poppy industry are as high as $700 million, and prior to the occupation it was a fraction of that.

Alexander: Here’s an interview with Russian General Mahmut Gareev (Ret.) who helped stop the production of drugs in Afghanistan between 1989 – 1990. He accuses the US of reestablishing the production of drugs in Afghanistan, which are smuggled out of the country in US war planes. He says the US makes $50 billion a year from these operations. (Read more here).


And here’s a graph detailing the drug production in Afghanistan before and after the Taliban took control: 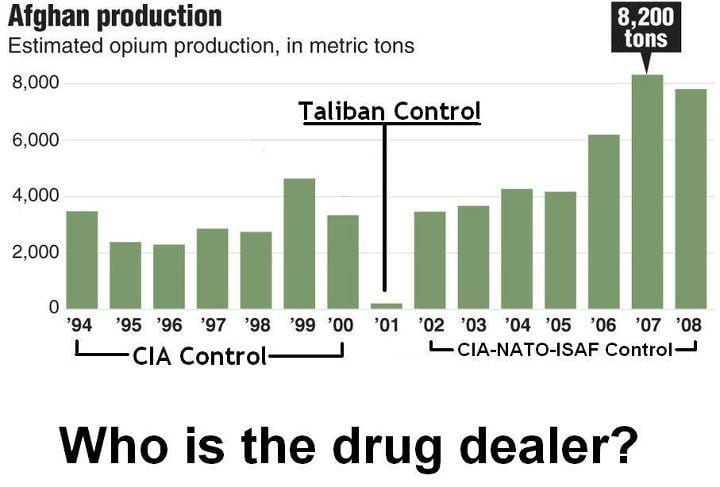 In the words of the US State Department:

“Opium is a source of literally billions of dollars to extremist and criminal groups… [C]utting down the opium supply is central to establishing a secure and stable democracy, as well as winning the global war on terrorism,” (Statement of Assistant Secretary of State Robert Charles. Congressional Hearing, 1 April 2004)

Looking back on those statements with the current information at hand, one could only come to one of two conclusions: Either the US government is simply inept when it comes to combating the Afghan opium trade, or it was complicit in its rise.

Either conclusion is unsettling to say the least and the former seems contradictory to the Taliban’s previous stance.

It has become quite clear that following the 15 year occupation of Afghanistan and the 40 plus years dedicated to the war on drugs; production, importation, and general distribution has not only failed to drop off as a result of the multi-billion dollar effort, but has increased with an unfaltering perseverance.

It becomes sadly clear that the trade has been supported versus restricted, by the very government speaking out against it so adamantly.

Whether this support came in the form of actual facilitation or simple complicity, both are equally hypocritical following the many declarations made condemning the trade in general.

In 1997, Alfred McCoy testified before a special seminar focused on linking the CIA to drug-trafficking:

“Under CIA and Pakistani protection, Pakistan military and Afghan resistance opened heroin labs on the Afghan and Pakistani border.

“According to The Washington Post of May 1990, among the leading heroin manufacturers were Gulbuddin Hekmatyar, an Afghan leader who received about half of the covert arms that the U.S. shipped to Pakistan…

Alexander: Click here for overwhelming evidence that the CIA is smuggling drugs for decades. And here’s a video of Judge Robert Bonner, head of the DEA, accusing the CIA of smuggling drugs:


The connection that the US government has established with the opium trade can no longer be ignored; especially at the cost of further US lives.

An estimated 9,500 American troops still remain in Afghanistan. As the US had officially ended the Afghan war in 2014, it would seem the US presence remains in order to ensure the unfettered and unhindered opium trade may continue.

There are those who genuinely have the best interest of the country and its troops in mind, when conducting military operations such as “Operation Enduring Freedom.” 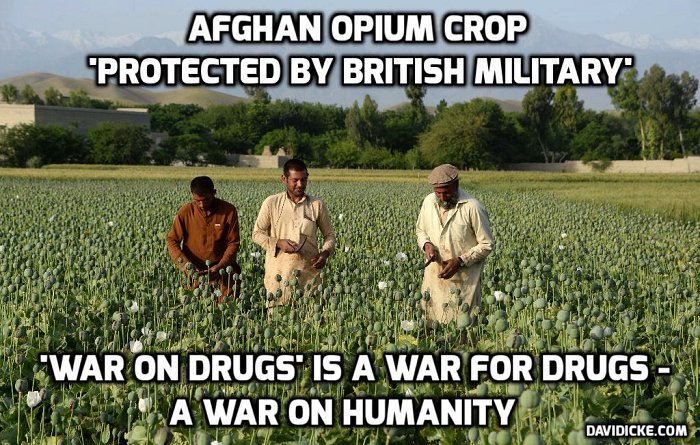 However, it must now be acknowledged that this nation’s leaders have a different agenda than the one being sold to the American people; or at the very least, there are factions within that have very different intentions.

There are those who feel the word “Freedom” represents patriotism and the end of tyranny, as it was when this country first began.

Yet, there are those who see only profit, coercion, and power within the very word on which this country has built its empire.