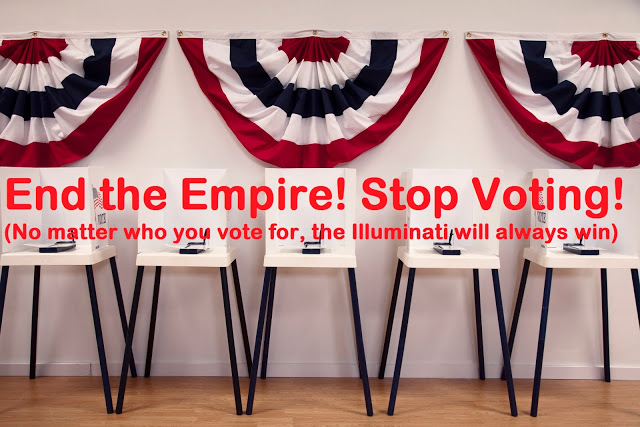 What if Nobody Showed up to Vote?

What if a presidential candidate threw a political rally, and nobody came? What if a government held an election, and nobody voted? What if that same government started a war, and nobody participated, whether in body or in spirit?

These questions are related.

Election season is trudging on, as are the wars. Many fans of peace hold out hope that if the former turns out a certain way, the latter may at last be mitigated. 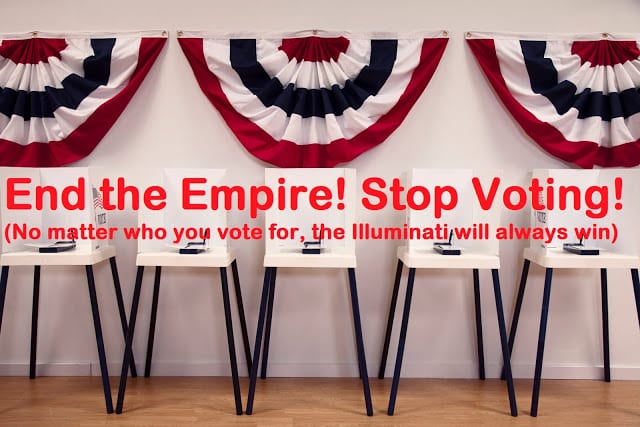 Some are terrified of Hillary Clinton. And who can blame them? As Secretary of State, “Dick Cheney in a pantsuit” was midwife to so many of the disasters that wrack the world with bloodshed and chaos to this day. Many anti-war folk of a left-leaning persuasion are flocking to Bernie Sanders.

Others are more concerned with finally toppling the neocons from their perches of power. And who can blame them?

The roots of our geopolitical plight reach back to before Clinton’s executive tenure, when the Bush administration neocons were launching their plans to remake the Greater Middle East. Many anti-war folk of the right-leaning persuasion are looking to Donald Trump to be their neocon-slayer.

But is this really the best we can do?

At the end of the day, Sanders is a moderate foreign interventionist who isn’t all too interested in foreign policy in the first place. Must anti-interventionists really settle for that in order to oppose hyper-interventionist Clinton?

And Trump actually out-hawks many Republicans when it comes to torture, the security state, civilian casualties, and blood-for-oil. Is such a man really to be the anti-war movement’s appointed champion against the neocons?

Thankfully, there is no need to support lesser warmongers in order to oppose greater ones.

Imagine if all the anti-war progressives now supporting Sanders, plus all the America-firsters now supporting Trump, were to stop flooding the internet and social media with electoral polemics. What if all that passion and digital ink was redirected to the message of peace.

An intense focus on policies over personas could really turn public sentiment against the actual combat of war, and divert public attention away from its obsession with the theatrical combat of political Wrestlemania.

You may wonder, what about the consequences of the peace camp abandoning its stations in the electoral battle against the worst war hawks? What if as a result Hillary or Ted Cruz’s neocon allies sweep to victory?

Must-read on the subject: The Illuminati Will Always Win the Elections

A clique may seize office, but the new administration will not govern in a vacuum. All regimes must strive to preserve public legitimacy.

And no regime can afford to flout too blatantly the prevailing spirit of the times. The new president may have won a majority of votes.

But if only a small proportion of the country actually voted in the first place, that translates into a rather shrunken mandate.

And if the non-voting bulk of the public is stridently anti-war, that especially diminishes the president’s foreign policy mandate in particular.

Faced with a sizable segment of the public intransigently opposed to war, even a militaristic president will be constrained, and may even need to draw back. Even Richard Nixon ended a war when public opinion demanded it.

Throughout history, most reductions in tyrannical violence have had nothing to do with the ideology or virtue of office-holders.

Instead, such reforms were the result of shifts in public sentiment. Under such conditions, to be a “reformer,” a politician need no redeeming quality other than being self-serving enough to shift with the wind. And if Hillary Clinton, Ted Cruz, or any other politician are anything, it is self-serving.

I’m not saying we should hope Hillary or Ted will win. I’m saying that who wins doesn’t matter nearly as much as the public’s attitude toward war and toward the Washington war machine itself.

On election day, if fewer people lined up dutifully to choose between aspiring elective emperors, and more people assembled defiantly to decry the empire itself, peace would have much better prospects.