The Forgotten Timeline of Planet Earth — Before & After the Great Flood

Are humans really a species with amnesia? Is it true that there is a forgotten historic timeline of our planet? A timeline ignored by mainstream historians?

According to several theories, and historical records, the answer is YES.

Interestingly, numerous cultures around the globe speak of a time when our planet was struck by a great deluge, which the ‘gods’ themselves called upon Earth and early man.

To understand their accounts, we need to travel to Eriu, — modern day Abu Shahrein, Iraq — the first city ever established by the gods, and home to the Ancient Sumerian deity Enki.

Researchers believe this ancient city was built around 5400 BC.

The ancient Sumerian King List supports the theory that suggests Eridu was, in fact, the “city of the first kings,” stating:

In this ancient city, we find the Eridu Genesis an ancient Sumerian Text, which describe the creation of the world, the construction of all ancient cities and the Great Flood, which swept across the land.

The Eridu Genesis, which is believed to have been composed circa 2,300 BCE, is the earliest known account fo the Great Flood, predating the more popular Great Flood described in the biblical book of the Genesis.

This is where many researchers have different views.

According to Thorkild Jacobsen, in his book ‘The Treasures of Darkness’:

“After Nintur [Ninhursag] had decided to turn man from his primitive nomadic camping grounds toward city life, the period began when animals flourished on earth and kingship came down from heaven.

“The earliest cities were built, were named, had the measuring cups, emblems of a redistributional economic system, allotted to them, and were divided between the gods.

“Irrigation agriculture was developed, and man thrived and multiplied. However, the noise made by man in his teeming settlements began to vex Enlil sorely, and, driven beyond endurance; he persuaded the other gods to wipe out man in a great flood.

“Enki, thinking quickly, found a way to warn his favorite, one Ziusudra. He told him to build a boat in which to survive the flood with his family and representatives of the animals.”

But if the great Flood did exist on Earth, what happened on Earth prior to the great destruction?

According to The Cosmic Code: The Sixth Book of The Earth Chronicles by Zecharia Sitchin, this is the historical timeline of our planet before and after the great Flood:

Events Before the Deluge

450,000 years ago,
On Nibiru, a distant member of our solar system, life faces slow extinction as the planet’s atmosphere erodes.

Deposed by Anu, the ruler Alalu escapes in a spaceship and finds refuge on Earth. He discovers that Earth has gold that can be used to protect Nibiru’s atmosphere.

445,000
Led by Enki, a son of Anu, the Anunnaki land on Earth, establish Eridu — Earth Station I — for extracting gold from the waters of the Persian Gulf.

416,000
As gold production falters, Anu arrives on Earth with Enlil, the heir apparent. It is decided to obtain the vital gold by mining it in southern Africa.

The ores arrive by ships from Africa; the refined metal is sent aloft to orbiters manned by Igigi, then transferred to spaceships arriving periodically from Nibiru.

380,000
Gaining the support of the Igigi, Alalu’s grandson attempts to seize mastery over Earth. The Enlilites win the War of the Olden Gods.

300,000
The Anunnaki toiling in the gold mines mutiny. Enki and Ninhursag create Primitive Workers through genetic manipulation of Ape woman; they take over the manual chores of the Anunnaki.

Enlil raids the mines, brings the Primitive Workers to the Edin in Mesopotamia. Given the ability to procreate, Homo Sapiens begins to multiply.

200,000
Life on Earth regresses during a new glacial period.

13,000
Realizing that the passage of Nibiru in Earth’s proximity will trigger an immense tidal wave, Enlil makes the Anunnaki swear to keep the impending calamity a secret from Mankind.

Events After the Deluge 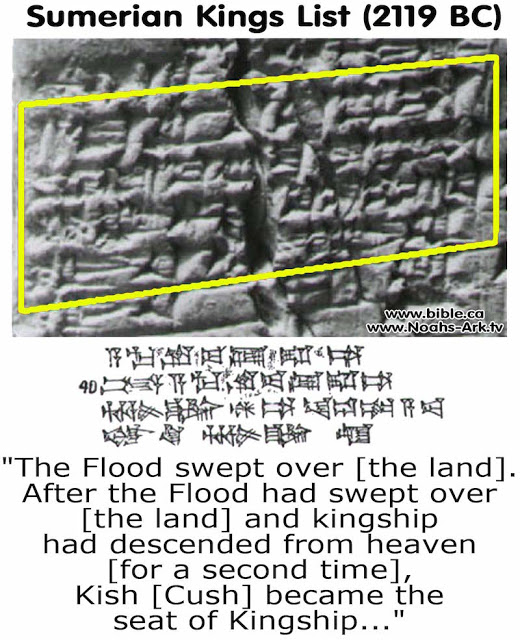 11,000 B.C.
Enki breaks the oath, instructs Ziusudra/Noah to build a submersible ship. The Deluge sweeps over the Earth; the Anunnaki witness the destruction from their orbiting spacecraft.

Enlil agrees to grant the remnants of Mankind implements and seeds; agriculture begins in the highlands. Enki domesticates animals.

The Sinai peninsula is retained by the Anunnaki for a post-Diluvial spaceport; a control center is established on Mount Moriah (the future Jerusalem).

8,670 B.C.
Opposed to the resulting control of all the space facilities by Enki’s descendants, the Enlilites launch the Second Pyramid War. The victorious Ninurta empties the Great Pyramid of its equipment.

Ninhursag, the half-sister of Enki and Enlil, convenes a peace conference. The division of Earth is reaffirmed.

Rule over Egypt is transferred from the Ra/Marduk dynasty to that of Thoth. The Heliopolis is built as a substitute Beacon City.

8,500 B.C.
The Anunnaki establish outposts at the gateway to the space facilities; Jericho is one of them.

3,800 B.C.
Urban civilization begins in Sumer as the Anunnaki reestablish there the Olden Cities, beginning with Eridu and Nippur.

Anu comes to Earth for a pageantful visit. A new city, Uruk (Erech), is built in his honor; he makes its temple the abode of his beloved granddaughter Inanna/lshtar.

To read a more detailed version of these events, please follow this link.

3,760 B.C.
Mankind granted kingship. Kish is first capital under the aegis of Ninurta. The calendar begun at Nippur. Civilization blossoms out in Sumer (the First Region).

Dumuzi accidentally killed; Marduk imprisoned in the Great Pyramid. Freed through an emergency shaft, he goes into exile.

3,100 – 3,350 B.C.
The years of chaos end with the installation of first Egyptian Pharaoh in Memphis. Civilization comes to the Second Region.

2,900 B.C.
Kingship in Sumer transferred to Erech. Inanna given dominion over the Third Region; the Indus Valley Civilization begins.

It ends when Nergal, Marduk’s brother, journeys from south Africa to Babylon and persuades Marduk to leave Mesopotamia.

2,291 B.C.
Naram-Sin ascends the throne of Akkad. Directed by the warlike Inanna, he penetrates the Sinai peninsula, invades Egypt.

2,180 B.C.
Egypt divided; followers of Ra/Marduk retain the south; Pharaohs opposed to him gain the throne of lower Egypt.

2,130 B.C.
As Enlil and Ninurta are increasingly away, central authority also deteriorates in Mesopotamia. Inanna’s attempts to regain the kingship for Erech does not last.

2,113 B.C.
Enlil entrusts the Lands of Shem to Nannar; Ur declared capital of new empire.

Ur- Nammmu ascends throne, is named Protector of Nippur. A Nippurian priest — Terah, Abraham’s father — comes to Ur to liaison with its royal court.

2,096 B.C.
Ur-Nammu dies in battle. The people consider his untimely death a betrayal by Anu and Enlil. Terah departs with his family for Harran.

2,095 B.C.
Shulgi ascends the throne of Ur, strengthens imperial ties. As empire thrives, Shulgi falls under charms of Inanna, becomes her lover. Grants Larsa to Elamites in exchange for serving as his Foreign Legion.

2,055 B.C.
On Nannar’s orders, Shulgi sends Elamite troops to suppress unrest in Canaanite cities. Elamites reach the gateway to the Sinai peninsula and its Spaceport.

2,048 B.C.
Shulgi dies. Marduk moves to the Land of the Hittites. Abraham ordered to southern Canaan with an elite corps of cavalrymen.

2,041 B.C.
Guided by Inanna, Amar-Sin forms a coalition of Kings of the East, launches military expedition to Canaan and the Sinai. Its leader is the Elamite Khedor-la’omer. Abraham blocks the advance at the gateway to the Spaceport.

2,038 B.C.
Shu-Sin replaces Amar-Sin on throne of Ur as the empire disintegrates.

Nippur’s Holy of Holies is defiled. Enlil demands punishment for Marduk and Nabu; Enki opposes, but his son Nergal sides with Enlil.

As Nabu marshals his Canaanite followers to capture the Spaceport, the Great Anunnaki approve of the use of nuclear weapons. Nergal and Ninurta destroy the Spaceport and the errant Canaanite cities.

Sumer and its great civilization lie prostrate. Its legacy passes to Abraham’s seed as he begets — at age 100 — a legitimate heir: Isaac.

Alexander: The Anunnaki eventually accepted Ra/Marduk as Earth’s supreme leader and decided to retreat into the shadows. Their hybrid Anunnaki-human descendants were left in charge. The wars for supremacy continue to this day.

The Cosmic Code: The Sixth Book of The Earth Chronicles
The Treasures of Darkness
Highly recommended book: The Lost Book of Enki: Memoirs and Prophecies of an Extraterrestrial God

A Message to Wikileaks, Cryptome, Public Intelligence, and Other Sites That Expose Secrets Previous post
The Awakening Will Continue Regardless of This Year’s Election Next post