The Renewable Insanity of Monsanto, Billy Boy, the Rockefellers and Craig Venter

Monsanto, Billy Boy, the Rockefellers, Craig Venter and other investors are working behind-the-scenes to bring genetically engineered (GE) algae to market with products that include fuel, animal feed made with manure, human food and jjabs.

The US government have a stake in this enterprise, too. Obama put a moratorium on drilling for oil on federal land and voted down the Keystone pipeline, in addition to subsidizing the nuclear industry instead of increasing oil reserves.

Obama has advocated replacing 17% of US oil imports with oil made from algae.

Algae could be the next bottomless pit that the government flushes money down, to the detriment of the taxpayer, similar to the many solar energy scandals.

There are two major areas of algae research that the government and private entities are funding; open pond algae farms use massive amounts of freshwater, but this is the cheapest option.

The second option is mutated, genetically engineered (GE) or synthetic algae that may be able to use saltwater and polluted water, but there are risks of out-of-control consequences.

Obama referenced a study that suggested 17% of US oil imports could be replaced with algae oil using the open pond method.  However, he failed to mention that these algae farms would require land mass the size of North Dakota and a continuous supply of freshwater.

It requires 350 gallons of water to produce 1 gallon of algae oil!  The amount of water required to replace 17% of oil imports is equal to 25% of all water in the US used for crop irrigation.

The study published by the Pacific Northwest National Laboratory failed to account for polluted water, evaporation and the energy required to keep ponds from freezing.

Critics of GE algae say that there are great risks that include mutation, contamination, becoming out-of-control, killing fish and polluting water systems.

The purpose of genetically engineered products is to lock up income-generating patents and to create monopolies.

Monsanto, Billy Boy, the Rockefellers, the pharmaceutical giant Wellcome Trust fund and others invested $144 million in the Sapphire Energy algae oil biotech company that is based in San Diego.

The US government, funded by taxpayers, gave over $100 million in corporate welfare grants and loan guarantees to Sapphire Energy.

Sapphire recently opened an operational algae-to-oil farm in New Mexico that uses non-potable (non-drinkable) water to grow algae that is mutated, but not genetically engineered at this time.  However, Sapphire plans to switch over to GE strains of algae.

Sapphire Energy has partnered with Monsanto and are receiving an undisclosed “significant income stream” from them. Monsanto’s interest in the fast-growing algae is in increasing staple crop yields on an enormous level, in addition to stress tolerance.

Most people who give a rat’s-tail about their health know that Monsanto’s GE crops are harmful, as was shown in a recent 2-year study published in France in which rats were fed only Monsanto GE food and they developed horrible tumors and organ damage.

He created artificial life by taking a disease-causing bacteria, replicating its DNA in the lab and implanting it into a host to ‘create’ a new species/disease that took over and killed the host.

Critics warn against an unintentional plague that could result from Venter’s tinkering. Some critics have also argued that he should cease his dangerous experiments until regulations are in place.

It would be a pleasant change to see regulations for criminal prosecution against those who create out-of-control organisms that destroy health and the environment.

In addition to Venter’s interest in algae oil, he wants to make GE/synthetic algae based food and jjabs that can be produced large-scale within hours.

Venter admits that governments will play a critical role in algae products because they can impose a tax on carbon dioxide to kill the coal and oil industries with artificially high prices, opening the door for expensive alternative fuels.

This is the very definition of a monopoly- monopolies are dependent on government intervention to manipulate markets and discourage competition.

The J. Craig Venter Institute, Synthetic Genomics and Sapphire Energy are listed as partners with the San Diego Center for Algal Biotechnology (SD-CAB).

SD-CAB promotes algae farming using degraded water sources such as waste-water to be used for biofuels and high-protein animal feed in California.

While algae is being pushed as an alternative fuel, animal feed and food for humans is far more profitable.

SD-CAB proposes manure from dairies and feed lots, known as Concentrated Animal Feed Operations (CAFOs), to be placed in an anaerobic bacteria digester (an oxygen-free processing container) to make a biogas to be used as a methane gas fuel.

Some of the sludge could then be used as a soil supplement fertilizer.

Then SD-CAB proposes using algae ponds to recycle nutrients from the digested sludge to make high-protein omega-3 oil to be used as a cattle feed supplement.

It is hard to understand how feeding cattle algae-treated manure is supposed to make better dairy products.  Do these people think that the products will taste better or be more nutritious? 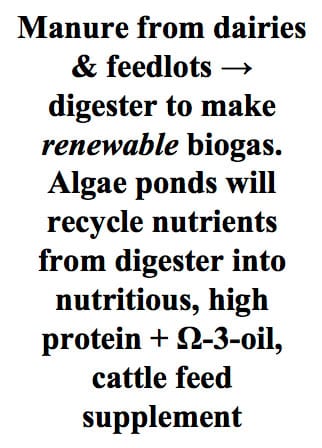 This video shows that they also have an interest in pharmaceuticals (0:40):


SD-CAB’s enterprise is estimated to cost $8 to $10 billion, and taxpayer funding will be essential to “kick-start” the industry.

THE BIG GUNS: THE US GOVERNMENT

As previously mentioned, government intervention is necessary to create monopolies, and government financing is required for the high cost of creating algae farms.

‘National energy security’ is used as an excuse to waste taxpayer money on another unrealistic alternative energy program. The US Department of Defense is is the largest consumer of oil, burning 320,000 barrels a day at a cost of $11 billion a year.

A government collaboration that involves the Department of Agriculture focusing on feedstocks, the Department of Energy overseeing technology and the Navy providing a market by buying the fuels sets the stage for corporate favoritism and monumental spending.

However, the Armed Services Committee voted to ban the Department of Defense from buying alternative fuels that cost more than traditional fuel. For now.