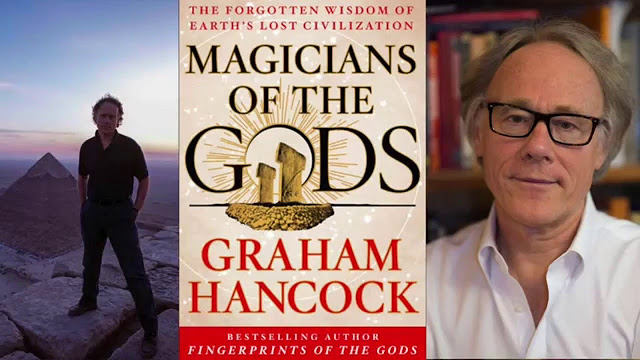 Graham Hancock is one of the most amazing modern explorers of both the planet’s material mysteries in terms of ruins and monoliths and the internal aspects of consciousness.

I learned of his participation in the Contact in the Desert Conference at the Joshua Tree Retreat Center just prior to going to Illuminate, so I decided to drive through the Arizona and California desert for a rare chance to see and meet him.

By the time I got to Joshua Tree, Graham had already presented his main ideas formally, making this a real treat — an informal interactive session with the man who has unearthed so many of history’s treasures and put them into a meaningful and cosmic context. 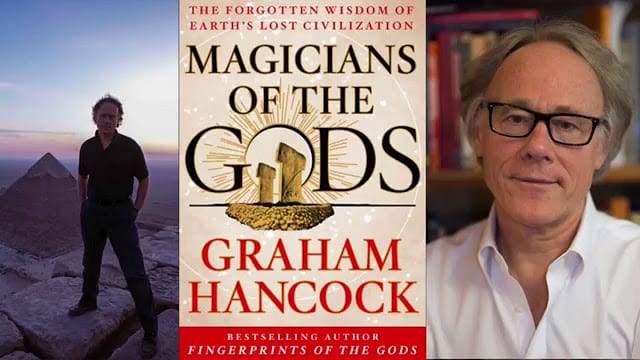 Graham gave an account of his journey, beginning with his family roots in England and his horrific experiences being conditioned in a private school, then moving on to becoming a journalist with the ability to travel the world.

He had been an atheist until he was cracked open to a new concept of man’s history by encountering stories about the Ark of Covenant in war-torn Ethiopia.

This experience began his interest in “out of place technology.”

Noting the connection between the Ethiopian stories of the Ark with his growing interest in the Ancient Egyptian texts, he dropped his atheism and became interested in spirituality — in “levels beyond levels” of reality that pointed to so much beyond the veil of what we take as truth.

When he began writing about ancient mysteries Graham encountered what he described as the perils of academia; dedicated to making his case, he found that he needed to be beyond perfect with annotations and still he was criticized and vilified by conventional archeologists and historians.

One intriguing aspect of Graham’s insight is that he claims that you “don’t need ancient astronauts”; rather, the veils of consciousness can be lifted by using the resources of the earth itself, and specifically the chemical properties of plants like Ayahuasca to “open the doors of perception.”

Still, the monuments are key sources of inspiration and Graham believes that there is much to learn from the stars, citing how in terms of the ancient skies the constellation of Leo was aligned with the gates of the Sphinx.

Besides conventional academics, political skirmishes also inhibit many new discoveries, but Graham urges that it will take a cooperative and new scientific method, embracing openness, to bring many hidden aspects of reality to light.

A key discovery will be how, after “six million years of boredom” with different primates and versions of humans, there was a sudden leap in consciousness and intelligence signified by the cave drawings of the ancients such as at Lascaux, France.

While some attribute this to extraterrestrial intervention, Graham makes the point that a distinct type of psilocybin mushroom thought to only be in the West actually existed in Europe as well, and he posits that its effect either contributed to or caused this enormous leap in the creative abilities of humans, and the birth of shamanic wisdom.

Graham became interested in the neuropsychology theory of cave art presented by David Lewis Williams of South Africa into deeply altered states of consciousness which suggested that it was psychotropic plants and the shamanic traditions that unfolded from their discovery that was responsible in the dramatic and sudden increase in intelligence among some human groups.

Graham agrees with Williams that the chemical agents in these sacred plants allowed humans to detach from materialism and evolve spiritually and intellectually very rapidly.”

Graham debunks conventional theories of Lascaux as merely paintings of reindeer, saying that of all the paintings, many deep in caves, only one reindeer appears with the feet of another species.

At the same time, modern DNA tests have proved the existence of mushrooms in Europe.

This inquiry led Graham to conclude that he must experience the reality facilitated by shamans in altered consciousness, and so he went to the Amazon.

Here he became convinced that it is our “plant allies” that offer the opening to experience a suddenly expanded universe and discover truths about ourselves.

He was open about the experience in terms of having “Mother Ayahuasca” reveal to him his own hubris and arrogance in the 90s and his own toxic emotional tendencies. This changed him forever.

“Mother Ayahuasca” was the most powerful example of a disembodied intelligence or entity he found through the plant in his experiences, and She told him to write a book and to stop his dependence on cannabis, both of which he described in detail and which he followed thereafter, resulting in the novel Entangled.

In the novel he deals with one truth conveyed by the plant, that the Neanderthal peoples we currently see as primitive and crude were actually immensely telepathic, compassionate, and peace loving, and helped the humans until we surpassed them, and presumably wiped them out.

To his critics about using “chemical” or unnatural means of awakening he responds:

“What could be more natural than a mushroom?” He said that he feels the need to personally experience everything he studies because otherwise it has the credibility of “celibate monks arguing about sex.”

Graham is passionate about the need for individuals to resist the efforts of the state to “control our consciousness” and believes this is an inalienable right of each human.

He admits that this is “all British shit” and lauds the American people for reversing the trend electorally in states like Colorado and Oregon.

He summarized that “Mother Ayahuasca kicked my ass” in the state of pure consciousness and he was exposed to the multi-dimensional nature of reality.

Graham acknowledges the risks involved but compares them to mountain climbing or jumping from a plane.

He believes that Ayahuasca brings contact with disembodied intelligences and that plants are like antennae on the earth, receiving and transmitting a multitude of frequencies and energy.

The plant neutralizes inhibitors in the gut to open what Huxley called “The Doors of Perception” and open the user to the “intelligence in vine.”

He compares Mother Ayahuasca to the Goddess Isis in Egypt and described an experience where he was made to “weigh his soul” in the fashion of the Judgment Hall of Osiris in Egyptian lore.

It was here that he confronted his own toxicity as a human and worked on his arrogance.

Graham cautions that in this state, nonphysical entities can take advantage and enter humans, which is why it is imperative to take the substance under the direction of an experienced guide or shaman.

One can come under attack and be the victim of “psychic vampirism” by Trickster entities but the benefits are to forever broaden our concept of reality.

Finally Graham described his current fascination with the fact that 30 convention scientists attribute the end of the Ice Age 12,800 years ago to a cataclysmic comet impact, and his theory is that newly found ruins of advanced civilizations represent the efforts to preserve the knowledge and wisdom of a super civilization that perished at that time.

Graham says that the key lesson of the plant and many of his experiences is to silence the mind and “choose love, not fear.”

I felt privileged to be able to witness this remarkable individual for even this short period of time on a personal level, and I was struck by his humility and grasp of the widely disparate subject areas he presented and his unique ability to connect the dots.

I also felt a kinship in terms of his many struggles to be accepted, his sense of being an outsider from a young age, his being an only child (as am I), and his discovery of his gift for the written word and exploration.

I almost blew off the event because of the ten hours of driving that it entailed but this was probably the most powerful lesson of all, that when life affords you a singular opportunity it is incumbent to accept — because our precious and privileged existence on this planet is truly a means of teaching and growth.

Graham Hancock’s latest book, Magicians of the Gods, is available on Amazon.