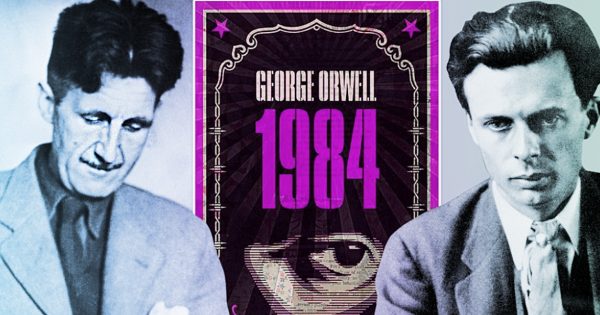 But because he concerned himself with the monumental importance of the subject of the book, he took the arduous effort to finish it.

What follows is an exploration of Huxley’s thoughts on the haunting future envisioned in the totalitarian world of 1984.

Huxley starts by praising Orwell’s vision of dystopia and the accuracy with which Orwell highlights the ruling elite’s deep-rooted belief that they can and should control the entire human organism, their perception, thoughts, and feelings. 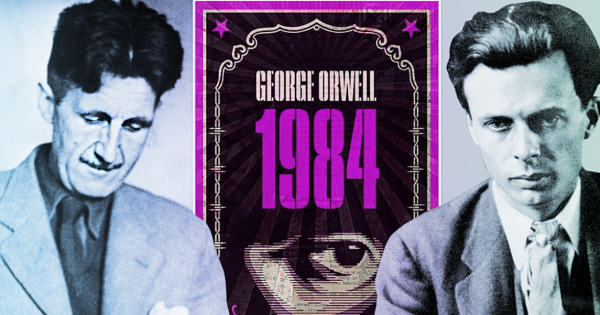 Huxley believed when we can all become critical of these agenda’s we will have  “the Ultimate Revolution.”

Yet, Huxley believed one single determining factor would in the end prove Orwell wrong: namely, efficiency.

“The policy of boot-on-the-face,” as Huxley called it, is wasteful. It takes too much energy to sustain itself.

Because of Huxley’s intimate knowledge of mind-altering drugs, psychological conditioning, and the sedating effects narcotics, he knew there was something far more powerful to manipulate the masses. And he was right.

But the fact that we don’t see the “boot” regularly doesn’t make Orwell wrong. You only have to look at the truth of our situation today to see that both of their radical insights act perfectly in conjunction.

Read Aldous Huxley’s prophetic letter to George Orwell Regarding 1984 below:

It was very kind of you to tell your publishers to send me a copy of your book.

It arrived as I was in the midst of a piece of work that required much reading and consulting of references; and since poor sight makes it necessary for me to ration my reading, I had to wait a long time before being able to embark on Nineteen Eighty-Four.

Agreeing with all that the critics have written of it, I need not tell you, yet once more, how fine and how profoundly important the book is.

May I speak instead of the thing with which the book deals — the ultimate revolution?

The first hints of a philosophy of the ultimate revolution — the revolution which lies beyond politics and economics, and which aims at total subversion of the individual’s psychology and physiology — are to be found in the Marquis de Sade, who regarded himself as the continuator, the consummator, of Robespierre and Babeuf.

The philosophy of the ruling minority in Nineteen Eighty-Four is a sadism which has been carried to its logical conclusion by going beyond sex and denying it.

Whether in actual fact the policy of the boot-on-the-face can go on indefinitely seems doubtful.

My own belief is that the ruling oligarchy will find less arduous and wasteful ways of governing and of satisfying its lust for power, and these ways will resemble those which I described in Brave New World.

I have had occasion recently to look into the history of animal magnetism and hypnotism, and have been greatly struck by the way in which, for a hundred and fifty years, the world has refused to take serious cognizance of the discoveries of Mesmer, Braid, Esdaile, and the rest.

Partly because of the prevailing materialism and partly because of prevailing respectability, nineteenth-century philosophers and men of science were not willing to investigate the odder facts of psychology for practical men, such as politicians, soldiers and policemen, to apply in the field of government.

Thanks to the voluntary ignorance of our fathers, the advent of the ultimate revolution was delayed for five or six generations.

Another lucky accident was Freud’s inability to hypnotize successfully and his consequent disparagement of hypnotism.

This delayed the general application of hypnotism to psychiatry for at least forty years.

But now psycho-analysis is being combined with hypnosis; and hypnosis has been made easy and indefinitely extensible through the use of barbiturates, which induce a hypnoid and suggestible state in even the most recalcitrant subjects.

Within the next generation I believe that the world’s rulers will discover that infant conditioning and narco-hypnosis are more efficient, as instruments of government, than clubs and prisons, and that the lust for power can be just as completely satisfied by suggesting people into loving their servitude as by flogging and kicking them into obedience.

The change will be brought about as a result of a felt need for increased efficiency.

Meanwhile, of course, there may be a large scale biological and atomic war — in which case we shall have nightmares of other and scarcely imaginable kinds.

Thank you once again for the book.

According to Huxley, then, the “boot” would transmute into a happy-pill because of a “felt need for increased efficiency.”

The nightmare Huxley envisioned is nightmarish exactly because it wouldn’t be experienced as a nightmare, it would just be considered normal.

If we finally break out of the force-fed bubble of egotism and passivity and educate ourselves of the truth amidst the swamp of disinformation, the boot still comes down.

We might not live in either fully realised dystopia yet, but there are alarming trends that a conjunction of both are possible.

Aldous Huxley’s Brave New World and George Orwell’s 1984 are available on Amazon and every good bookstore.