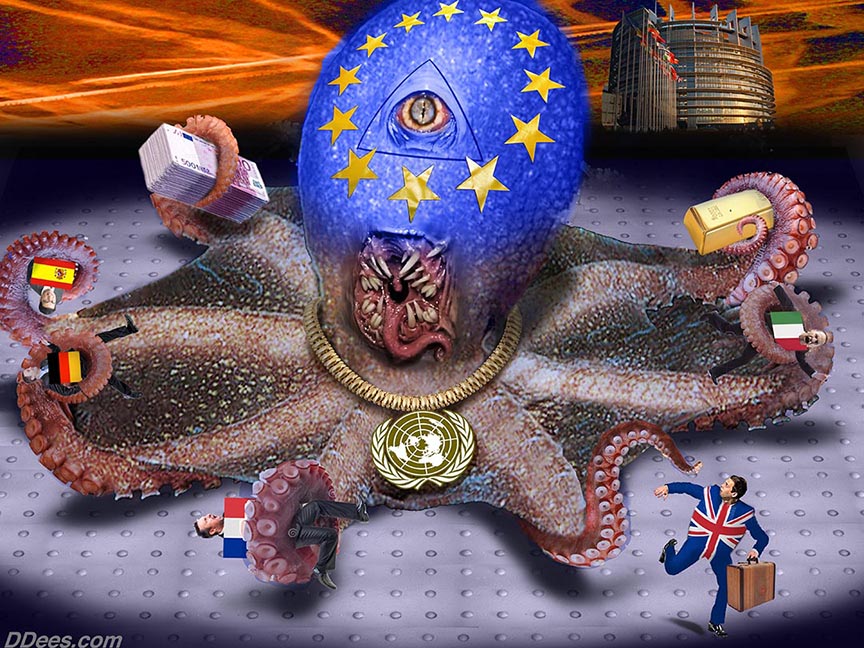 Brexit is Victory Over the Rothschilds & EU Globalists

The globalist establishment has been at war against the people for decades. Centuries of scheming produced the EU centralization monster. The overwhelming deceit and destruction caused by the ruling class has finally received a setback in a plebiscite on the European Union.

The New World Order of collectivists born in satanic ideologies, implemented by international finance, imposed through the carnage of continuous wars and administered under an abusive bureaucracy system of non elected technocratic elites has suffered the repudiation of British men and women, who want to restore England to a sovereign nation under the principles of Magna Carta.

With the immediate jubilation from the counted paper ballots, the long demoralized public of English heritage found optimism for the first time in recent memory.

Such enthusiastic satisfaction is entirely understandable with the historic results that clearly rejected the pagan system of foreign domination. 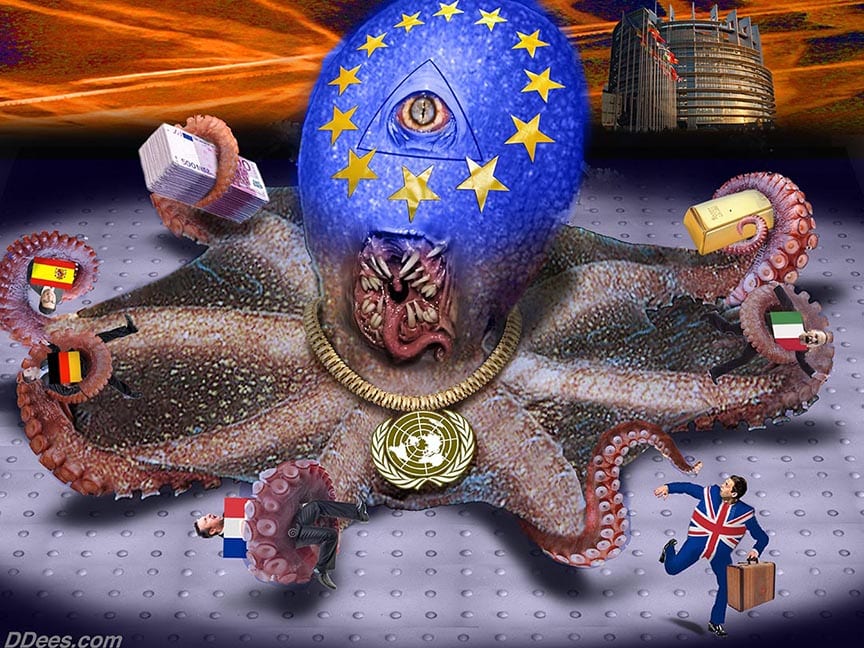 Now it is time to mature from being a submissive serf and reach for the bravery to become a free born Englishman.

With the organized and coordinated reaction from the EU globalists that populate the City of London financial juggernaut, it is beyond any debate that a state of war is put into full motion against the common people.

The rigged equity, bond and currency in the international Bourses, used the massive sell off to make immense gains for those positioned for shorting these manipulated markets.

As the financial presstitutes and media whores place the blame for this drop on the stupefied Brexit supporters, it is obvious that the divide between the populace and the privileged classes is just as wide as in the era of the East India Company.

Britain leaving the EU is not the root cause for a capital collapse. No, the monetary basis for conducting commerce is at the core of this engineered crisis.

In order to correct the long term economic landscape for merchant commerce, the entire banking system must be transformed into a debt free created currency administrator.

The Secretive Bank of England essay of Forbidden History directly focused on the Rothschild scheme to subjugate Christian Europe under the Talmud exalted usury plot of the bankster conquest. Make no mistake about the actual state of affairs.

Europe long ago came under the rule of zealot Zionists, who use multiculturalism as the Judas goat of national annihilation. This enemy of Western Civilization practices the worst of all identity politics with their chosen protocols.

The vote in favor of Brexit is a mere emotional victory without the required and necessary renunciation of the Shylock monetary system of central banking tyranny.

Such an assessment is factually correct, but is considered as bigoted by the definite racists, who blame anyone who criticize international finance as an anti-Semitic.

To this anti-intellectual canard, the bold and honest defender of our cultural heritage must step up and speak the truth. Brexit also has this well timed and favorable aspect that most financial and political reports have totally missed.

Keeping the Sterling currency independent and insulated from the perversions of central banking is essential to restore political liberty and national integrity of the UK.

If the birth place of parliament is to re-establish the natural rights of human nature, the will of the people must be obeyed.

Yet, the prospects for a rational and moral restoration are remote, when the power of the collectivist establishment is threatened.

The numerous other countries that are calling for their own referendum for leaving the EU or outright secession from their own state jurisdictions are emboldened with the success of Brexit.

However, the enthusiasm is most premature. As the war on the citizenry intensifies, the power elites will use every excuse and blame Brexist for their own failures.

Creating an intentional economic collapse is highly likely. How the people react will determine if the New World Order can be defeated.

The amount of support to stay within the EU is indication of just how many sycophants exist that want to subsist under the dictates of the technocrats tyrants.

For the rest of the lackeys that are actually part of the public administration apparatus, their objective is to protect the pensions and benefits derived from their masters at all cost.

The EU Globalists are still firmly in control of the institutions and coercive machinery that continues to define the popular culture and political enforcement system.

This is the time to appreciate the epic triumph of sentiment, but it is far more important to build the regiments of revolt against the actual power centers of despotism.

With the success from a vote, the attitudes of timid bystanders got a wake-up call to join the liberation revolution.

It is long overdue to learn the consequences of the true history about Oliver Cromwell as he waged the English Civil War to establish the supremacy of Parliament over the King. His grave mistake under his Protectorate was his re-admission of the Jews into England.

Soon thereafter, the Bank of England was created and the betrayal of Britain began in earnest.

Now note the assessment from historian Michael Hoffman from the last edition of his Hoffman Wire mailing, Britain’s Bulldog Breed Take a Bite Out of the New World Order.

“No people can sustain themselves on repeated defeats. On June 23, 2016 the British gave our people a victory that uplifts morale in America and throughout the western world: they have defied the elites and voted to leave the Brussels-based European Union (EU).

This is beautiful for many reasons, not the least of which is the fact that the British media trotted out a corpus of “expert opinion” ordering the flinty citizens of the island nation to stay in the EU for the sake of consumerism and globalism.

Money was held aloft as the supreme motive for remaining, and the ones raising this banner of mammon were from the “financial services industry,” which is a media-euphemism for the usurious gang who dominate almost every western country.

Under the laws of the European Union’s super-state, the tiny island nation had to admit any number of immigrants, no matter how large, from member nations. This includes millions of angry and alienated Muslim youth in EU member countries like France and Germany.

Polls repeatedly revealed that this deluge was the driving force behind the vote for a British exit (“Brexit”) from Brussels.

The English and Welsh chose their land and their people — national sovereignty and independence —  over the Money Power and the EU’s Tower of Babel. Thank God!

Lest we conflate a victory in one great battle in Britain with a decisive defeat of Satan’s kingdom in the West, we ought to examine the bigger picture, which entails factoring the Zionists’ plans for Britain and Europe.

They have a long memory and forgiveness forms no part of their gestalt. They view Britain and Europe as hereditarily and ineradicably tainted by their former resistance to Judaism.

Influential Orthodox rabbis have let the cat out of the bag by smirking at the growing presence of Sunni-Wahhabist Islamic terrorists scourging Britain and Europe.

Inevitably these rabbis cite the “unforgivable” Christian resistance to Judaism in the past, as justification for gloating over the immigration invasion, and self-extinguishing rates of abortion, contraception, suicide and euthanasia in Europe and Britain.

One of the main Zionist outlets for their undying hatred is the controlled media of the West, where Europeans and the British are perpetually targeted with movies, TV shows and publications portraying them as moral lepers, fiendishly sadistic mass murderers and in general possessed of a tainted genetic stock.

Judaics alone emerge from this media fever-swamp as angelic bearers of a heritage of saintly goodness.

If you truly want to understand the globalist cult of corporatism control, you need to have the courage to confront the genesis and nature of the adversary.

The loss of national sovereignty for Western countries is a concrete objective for the globalist tribe. Brits expressed their disdain for their oppressors. Nevertheless, the eternal struggle is not yet won.

Brexit is a great beginning, but the establishment is already floating many options to sabotage the voice and determination of the real English population.

You will never engage in this discussion in the Zionist owned “PC” media, because urbane gentlemen only profess the cosmopolitan version of conformist assimilation.

European demographics are posed for the extinction of the Renaissance traditional culture. This destruction is not accidental.

Even with a successful exit from the EU, the UK is on path for dissolution of regional parts. Scotland, Northern Ireland and even the City of London itself, want to remain as part of the European Union.

A second English civil war is not out of the question. Hopefully, a peaceful method to break up the union can be found.

Notwithstanding, if the central banksters remain in charge of the money fractional reserve model, the Shekel remains the coin of the realm.

Resistance to the ruling class of globalists is the unending imperative until the ultimate victory can be won. It will take more than a simple Brexit vote to end the occupation.