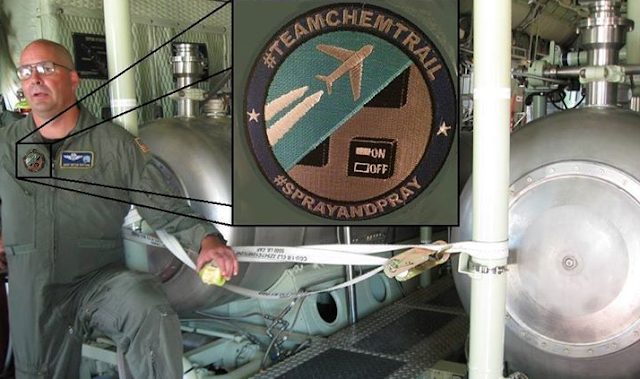 Do you remember the first time you noticed those long puffy clouds emanating from jets that didn’t just evaporate?

You saw them spread out, dissipating a cloudy mist that blocked the sunshine. Maybe a friend, or an online source informed you that those were chemtrails, containing aerosol toxins that could be turned on or off at will.

According to Global Research, since the 1940s, the American population have been guinea pigs for a variety of biological and chemical concoctions courtesy of the U.S. military. 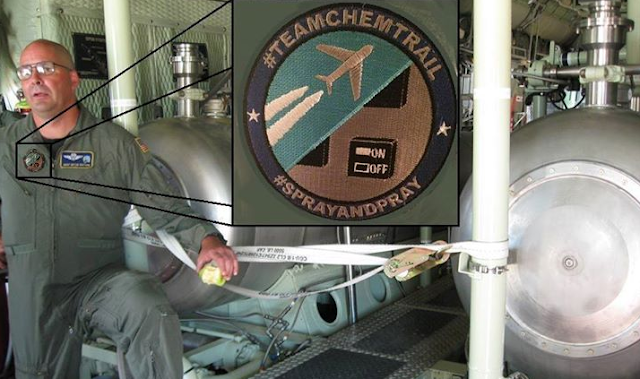 Disclaimer: the patch is most likely photoshopped, as I was not able to find it anywhere else.

These chemtrails are just the latest in a long line of assaults. What’s inside this spray? It varies, and it’s not good for us, nor the hydrological processes of the planet.

We are under a poisonous attack under the guise of protecting the earth from over heating. Official denials have been consistent and those who speak out against these practices have been ridiculed.

But, according to The Free Thought Project, there’s been a chemtrail confession by none other than John A. Brennan, the director of the Central Intelligence Agency (CIA).

CIA Director Brennan says that stratospheric aerosol injection (SAI) has “gained his attention.” Does that mean he looks up? Not exactly.

In late June, 2016, the CIA chief spoke about “instability and transnational threats” at a meeting of the Council on Foreign Relations in Washington D.C.

When the head of the CIA says that stratospheric aerosol injection programs (SAI) “could limit global temperatures” but “SAI alone would not remove greenhouse gases from the atmosphere,” it sounds like he’s working for the Environmental Protection Agency (EPA).


By the way, that EPA Clean Power Plan is all about reducing carbon – that “deadly” greenhouse gas – and it’s being challenged in the courts by 24 states. Think about this.

Co2 is called a greenhouse gas because greenhouses use Co2 to make plants grow bigger and more robust! Since we exhale Co2 to feed the trees, is our breath next to be taxed?

What’s Al Gore got to do with it? Plenty. Just follow the money.

In 2007, former Vice President Al Gore received a Nobel Peace Prize for his work on global warming. In his acceptance speech, he claimed that the Artic ice caps would disappear by 2014.

(Incidentally, in 2016, Forbes says that NASA has reported the Artic ice is doing just fine.)

According to Forbes, by 2011, these two raked in $218 million from investors who wanted to cash in on the wave of cap and trade. But it’s not labeled global warming anymore.

Here’s a great mini debate about just that between Bill Nye, the “science guy” and “climate realist” Mark Morano of Climate Depot from 2012.

If you’ve been breathing in what they now admit they are spewing out, you might want to consider taking a superfood supplement to help support your health.

Reference: Newstarget
Nikola Tesla: Wisdom from the Past, or Visions of the Future? Previous post
Legalized Marijuana Will Reduce Prescription Drug Use By Billions Next post