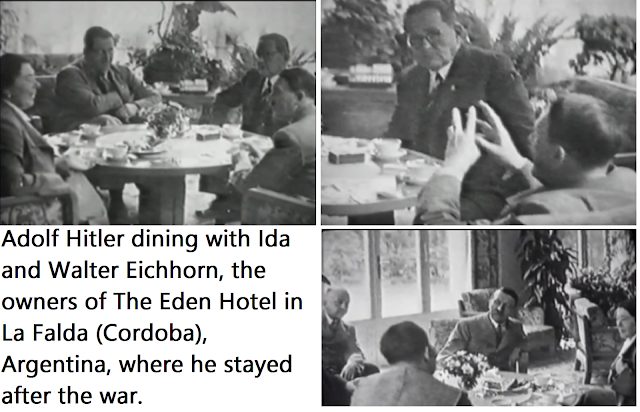 We all know who Hitler was and that our history books say that he died in 1945 in a suicide pact with his newlywed, Eva Braun.

New information gives a different theory stating that Hitler did not die, but escaped to live under the radar in South America.

Is it possible that we were lied to all this time, and that the history you have been taught in school is a complete fabrication?

Official records hold that the brutal dictator, shamed in defeat in April 1945, shot himself in the head in a bunker in Berlin while his wife took a lethal cyanide pill. Their bodies were then quickly burned and buried in a shallow grave. 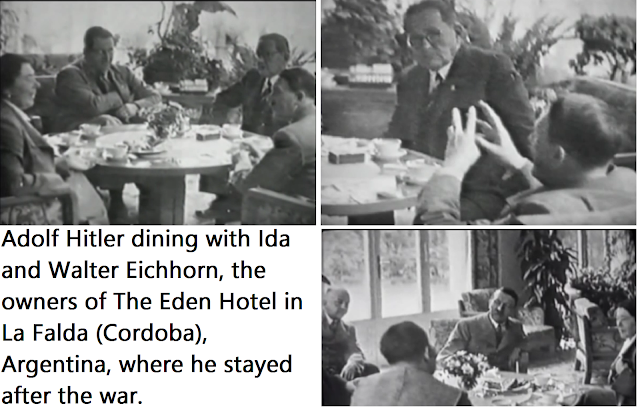 Collage of pictures depicting Adolf Hitler in Argentina, where he stayed for a while after the war (The Eden Hotel in La Fada, Cordoba)

But what if this was another distraction while the Führer was actually whisked away in a shadowy plot to ensure he would not fall into the clutches of advancing soviets?

I know, I know this all might seem a bit tin-foily, but just stick with me for a minute.

Historian Abel Basti detailed a hypothesis in a new edition of his book published in Argentina, “Hitler in Exile” an account now making headlines, even with such mainstream media as the Huffington Post.

“There was an agreement with the US that Hitler would run away and that he shouldn’t fall into the hands of the Soviet Union,” Basti said.

“This also applies to many scientists, the military, and spies who later took part in the struggle against the Soviet regime.”

Basti believes that Hitler slipped to safety via a tunnel beneath the Chancellery connected to Tempelhof Airport, where a helicopter or a small plane was waiting to whisk the Dictator to Spain.

Update: The following video clip features a WWII veteran, a two-time Purple Heart and Bronze Star With Valor recipient, Aubrey Temples. As a POW, he came face to face with Hitler on April 30, 1945, the day he and Eva Braun supposedly committed suicide in the Berlin bunker:


Author and historian, Peter David Orr, conducted eight extensive interviews with Aubrey, in an attempt to debunk his account. Discover how Aubrey changed this skeptic’s mind — and by doing so, the history of WWII’s final chapter. As a result, he wrote must-read book, entitled “Eyewitness to Hitler’s Escape“.

Traveling first to Canary Islands, Hitler made his way to Argentina on a U-boat, where he lived for ten years before settling in Paraguay under the protection of Dictator Alfredo Stroessner.

“Wealthy families who helped him over the years were responsible for the organization of his funeral,” Basti explained.

“Hitler was buried in an underground bunker, which is now an elegant hotel in the city of Asuncion.

“In 1973, the entrance to the bunker was sealed, and 40 people came to say goodbye to Hitler. One of those who attended [the funeral], Brazilian serviceman Fernando Nogueira de Araujo, then told a newspaper about the ceremony.”

Basti is not alone in this theory:

A CIA operative with 21 years of experience, Bob Baer, and “one of America’s most elite intelligence officers,” described something similar on a documentary series for the History Channel called Hunting Hitler, which aired in 2015.

Alexander: Among these documents you will also find the following report (click image to enlarge): 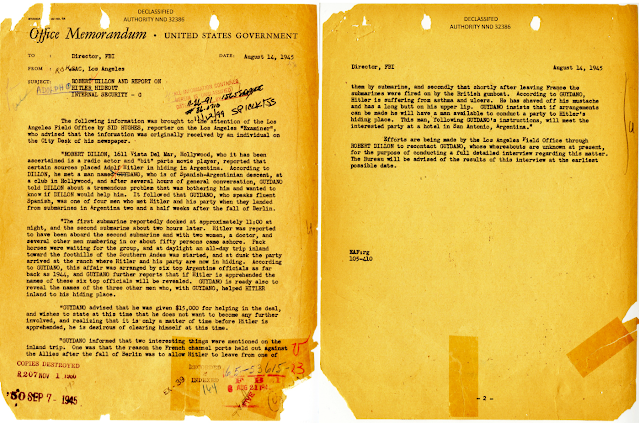 In it, it is the first hand account of someone named Guydano who was sent to meet Hitler and his party (fifty people in total) as soon as they landed from submarines in Argentina, two and a half weeks after the fall of Berlin.

Guydano explained that this affair was arranged by six Argentinian top officials and he was ready to reveal their names as soon as Hitler was caught. He was convinced that it was only a matter of time before Hitler was going to be apprehended and feared that he would be accused of being part of the plot.

Excerpt: “GUYDANO was one of the four men who met Hitler and his party when they landed from submarines in Argentina who and half weeks after the fall of Berlin.

“Hitler… with two women, a doctor, and several other men numbering in or about fifty persons came ashore. (…) at the dusk the party arrived at the ranch where Hitler and his party are now in hiding.

“According to GUYDANO, this affair was arranged by six top Argentine officials as far back as 1944, and GUYDANO further reports that if Hitler is apprehended the names of these six top officials will be revealed.

“GUYDANO is ready also to reveal the names of the three other men who, with GUYDANO, helped Hitler inland to his hiding place.

And here is another report (dated July 14, 1945) of Nazi submarines landing in Argentina (click image to enlarge): 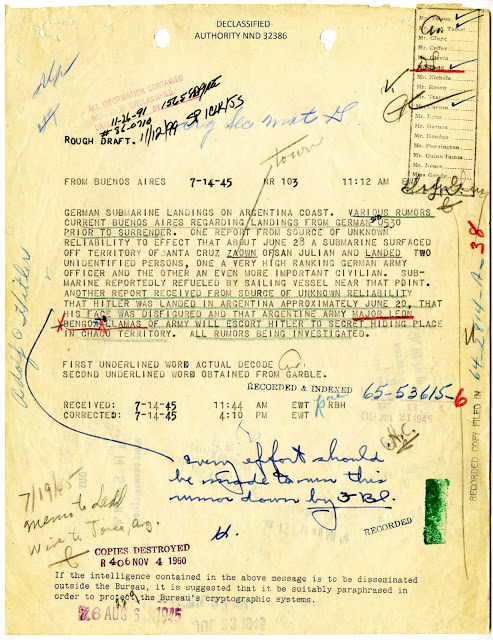 The FBI headquarters file on Adolf Hitler, File 65-53615, began being released by the FBI to researchers under the Freedom of Information Act on 26 April 1976, though in a redacted form.


One investigator noted that:

“American Army officials in Germany have not located Hitler’s body nor is there any reliable source that Hitler is dead.”

DNA Tests on “Hitler’s skull”: Neither Hitler’s nor Eva Brown’s

But perhaps the most damning piece of evidence lies in Russia. With the Soviet occupation of Germany, Hitler’s supposed remains were quickly hidden and sent off to Russia, never to be seen again.

That is until 2009, when an archaeologists from Connecticut State, Nicholas Bellatoni was allowed to perform DNA testing on one of the skull fragments recovered.

What he sent offset off a reaction through the intelligence and scholarly communities. Not only did the DNA not match any recorded samples thought to be Hitler’s, they did not match Eva Braun’s familiar DNA either.

“The bone seemed very thin; male bone tends to be more robust. And the sutures where the skull plates came together seemed to correspond to someone under 40.”

Bellantoni’s suspicions from physical examination were confirmed authentic when they were backed up by the molecular, genetic analysis.

The skull, which the soviets had proffered as proof of Hitler’s self-inflicted gunshot for decades, belonged to an unidentified female.

Whether or not you make a habit of doubting official stories, you should be able to see that despite the story we have been spoon fed all these years, there is credible evidence to prove the contrary.

Here’s an interesting documentary on the subject, entitled “How Hitler Got Away”:

The  house were Hitler spent the last years of his life, is a remote mansion similar to the infamous Berghof located in the Nahuel Huapi Lake, in Patagonia, Argentina, a remote mountainous paradise full of Nazi refugees. 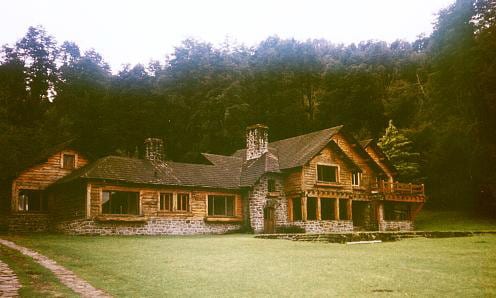 The mansion — called ‘Residencia Inalco’ — is now for sale after going through a few owners starting with Enrique García Merou, a Buenos Aires lawyer linked to several German-owned companies that allegedly collaborated in the escape to Argentina of high Nazi party members and SS officials.

He bought the lot from architect Alejandro Bustillo, who created the original plans of the house in March 1943.

Bustillo also built other houses for Nazi fugitives who were later aprehended in the area. The terrain in which the house was erected, on Bajia Istana near the little town of Villa La Angostura, was quite remote and hardly accessible at the time.

The plans are similar to the architecture of Hitler’s refuge in the Alps, with bedrooms connected by bathrooms and walk-in closets and a tea house located by a small farm.

Like Berghof, the Inalco house could only have been observed from the lake—a forest on the back limited the view from land. It even had Swiss cows imported by Merou from Europe.

Later, Merou sold the house to Jorge Antonio, who was connected to the President Perón and was the German representative of Mercedes Benz in the South American country.

According to the book “Grey Wolf: The Escape of Adolf Hitler“, Hitler was already dead — after leaving behind two daughters — by the time the house was sold to José Rafael Trozzo in 1970.

Kopps was connected to Erich Priebke, former Hauptsturmführer in the Waffen SS who participated in the massacre of the Ardeatine caves in Rome, in which 335 Italian civilians were executed after a partisan attack against SS forces.

Priebke was a respected member of the high society in the area. He was the director of a school Primo Capraro. The son of Capraro sold the Inalco house terrains to Bustillo.

The Trozzo family is now selling the house and the original plans have now been published, along with the Hitler legend recently resuscitated by “Grey Wolf”, perhaps in an effort to increase the interest on the property. 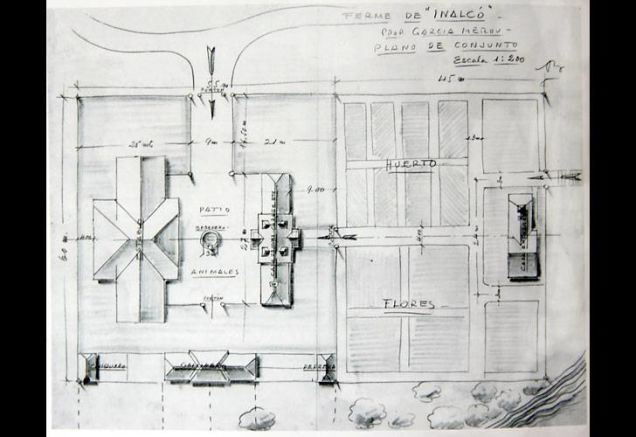 The complex was completely autonomous, with its own animals and agricultural areas. It also had a ramp that led into the lake, with a boat house that was rumored to contain a hydroplane.

First of Its Kind Study Shows 55,300 People Hospitalized or Killed by US Cops in a Single Year Previous post
Philip K. Dick’s Predictions for the Future Next post