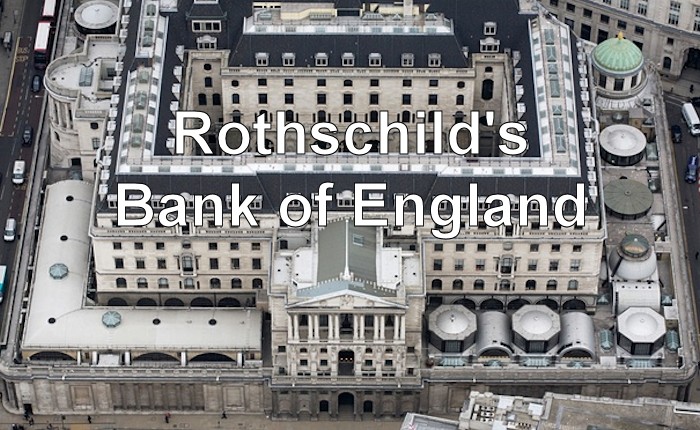 The Secretive Bank of England — Controlling the World’s Money Supply

With the enactment of the privately owned central bank, the Bank of England provided the model for the financial enslavement of governments, and their citizens.

Well before the conflict for establishing a National Bank in America or the eventual surrender to the money changers with the betrayal in instituting the Federal Reserve, the history of the Bank of England needs to be studied.

Relying on British historians may seem to invoke a cultural bias; however, the range and wealth of information on this topic comes from an earlier age. Further research will expand this understanding and many of the sources cited can fulfill this objective.

For purposes of a mainstream account, the official site of the Bank of England provides a flowery version about the background and purported success of the scheme proposed by “William Paterson, envisaged a loan of £1,200,000 to the Government, in return for which the subscribers would be incorporated as the “Governor and Company of the Bank of England”. 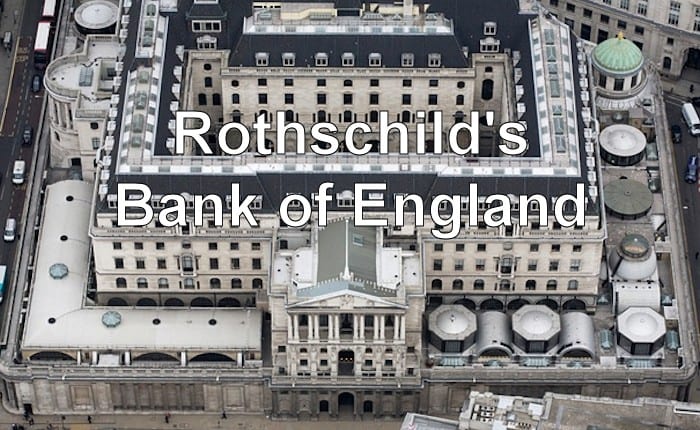 Although the new bank would have risked its entire capital by lending it to the Government, the subscription proved popular and the money was raised in a few weeks.

The Royal Charter was sealed on 27 July 1694, and the Bank started its role as the Government’s banker and debt-manager, which it continues today.”

“The bank hath benefit of interest on all moneys which it creates out of nothing.” – William Paterson

THE FORMATION OF THE BANK OF ENGLAND by Halley Goodman provides a detailed and well sourced chronicle and background.

“The goldsmiths evolved to become the original private bankers of the time. Since  goldsmiths already had as part of their trade private stores of gold and stout vaults to store them in, entrepreneurs could entrust their own gold to them for safe keeping, for a fee, and receive a paper receipt for the deposit.

“The goldsmiths could then lend monies against these deposits for an additional fee. Mr. Hartley Winters declares that “some ingenious goldsmith conceived the epock-making notion of giving notes…and so founded modern banking.”

Merchants would deposit “their money with the goldsmiths and received from them receipts” that “…were payable on demand, and were transferred from one holder to another in payment of debts.”

“These receipts or notes from the goldsmith bankers, often in the form of a letter, are some of the earliest surviving cheques in England. Given the economic realities of the time, although deposits provided the funds for their business, most of the clients of these goldsmith bankers were usually borrowers rather than depositors.”

From such humble origins, the foundation was laid to invent a central bank that would create money out of thin air and loan it at interest to the government, who lost it sovereignty for making this Faustian bargain.

Secrets of the Bank of England Revealed at Last!

The Charter of the Bank of England (1694) with the Great Seal of William and Mary. The first usury central bank to be incorporated in England.

The Bank of England account, published by Cassell, Petter & Galpin cites a rocky start and opposition from the goldsmiths.

“In 1696 (very soon after its birth) the Bank experienced a crisis. There was a want of money in England. The clipped silver had been called in, and the new money was not ready.

Even rich people were living on credit, and issued promissory notes. The stock of the Bank of England had gone rapidly down from 110 to 83.

The goldsmiths, who detested the corporation that had broken in on their system of private banking, now tried to destroy the new company.

They plotted, and on the same day they crowded to Grocers’ Hall, where the Bank was located from 1694 to 1734, and insisted on immediate payment — one goldsmith alone demanding £30,000.

The directors paid all their honest creditors, but refused to cash the goldsmiths’ notes, and left them their remedy in Westminster Hall. The goldsmiths triumphed in scurrilous pasquinades entitled, “The Last Will and Testament,” “The Epitaph,” “The Inquest on the Bank of England.”

It did not take long for the Jewish bankers to set their sights on Paterson’s bank and financers for the English regime. Brother Nathanael Kapner adds his audacious viewpoints.

“The new King William III soon got England involved in costly wars against Catholic France which put England deep into debt. Here was the Jewish bankers’ chance to collect.

“So King William, under orders from the Elders of Zion in Amsterdam, persuaded the British Treasury to borrow 1.25 million pounds sterling from the Jewish bankers who had helped him to the throne.

“Since the state’s debts had risen dramatically, the government had no choice but to accept. But there were conditions attached: The names of the lenders were to be kept secret and that they be granted a Charter to establish a Central Bank of England. Parliament accepted and the Jewish bankers sunk their tentacles into Great Britain.”

Actual control of the fiat central bank is discussed in Who owns the Bank of England?

“A very famous story relates to the Bank of England and the infamous Rothschilds, that all powerful banking family.

This story was re-told recently in a BBC documentary about the creation of money and the Bank of England.

It revolves around the Battle of Waterloo in which Nathan Rothschild used his inside knowledge of the outcome and his faster horses and couriers to play the market by getting the result of the battle before anyone else knew the outcome.

He quickly sold his English bonds and gave all the traders who looked to him for guidance the impression that the French had won at Waterloo.

The other traders all rushed to sell their bonds before the market crashed thinking that they were now worthless and a massive fire-sale occurred as brokers clamered to get rid of their stock.

This massive sell off quickly drove the price of the bonds down to 5% of their original worth.

Once the bottom had dropped out the market Nathan Rothschild then re-bought as many bonds back as he could at hugely discounted prices and in doing so he multiplied his wealth twenty times in 3 days of trading.

At the same time as becoming immensely wealthy he also became the single largest debtor to the English government which ultimately gave him control over the bank of England.” — (Read more on the subject here).

If you are so inclined to do your own research, two sources, HISTORY OF THE BANK OF ENGLAND written by Dr. A. Andreades and Complete Histories: Bank of England to 1694, are worthy of review.

“As you can see by the 250-year chart of Bank of England stock, the shares showed no real trend during the 1700s, rose in price during the Napoleonic Wars as England left the gold standard and suffered inflation, declined in price from around 1818 to 1845 during the deflation that followed, rose in price for the rest of the 1800s as the Bank gradually increased its dividend, plunged until 1920 as inflation occurred without any compensating rise in the dividend, then gradually rose in price until the Bank was nationalized in 1945.

Now for most of its history the privately held, Bank of England was extremely profitable to its owners. The method for charging interest on the creation of money has been the prime vehicle for driving both public and private debt throughout modern times.

The Guardian reports in the article, The truth is out: money is just an IOU, and the banks are rolling in it.

“The Bank of England let the cat out of the bag. In a paper called “Money Creation in the Modern Economy“, co-authored by three economists from the Bank’s Monetary Analysis Directorate, they stated outright that most common assumptions of how banking works are simply wrong, and that the kind of populist, heterodox positions more ordinarily associated with groups such as Occupy Wall Street are correct.

“In doing so, they have effectively thrown the entire theoretical basis for austerity out of the window.”

The entire monitory financial system is based upon charging usury on the creation of national currencies.

No larger debtor exists then governments. The perfection of the Rothschild fraud is founded upon charging compound interest on the very medium of exchange that serves as legal tender.

The Bank of England set the stage for the centralization of all banking under the umbrella of banksters control.

In order to discover all the secrets of manipulating the financial system, one must comprehend, the first and primary lesson; that central banks do not function as beneficiaries to their host nation, much less the ordinary “little people”.

Keeping this deplorable rip-off system extorting their pound of flesh is the principal objective of the financial elites. Interest on government bonds must be paid. More debt needs to be incurred. And the framework for human impoverishment lies at the feet of central banking.