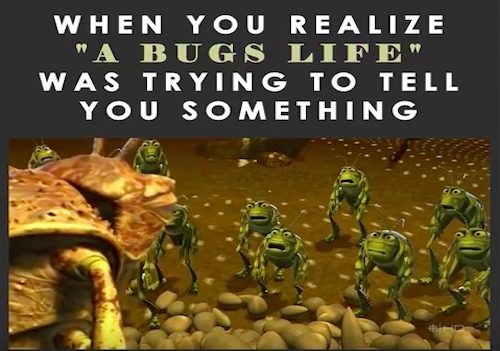 How often have you been passionate about something, whether it be animal, environmental, or women’s rights, or racial or economical inequality, when you suddenly get the idea to do something about it?

You mull over all the ways you will become an activist and make a difference, only to find yourself faced with one problem: You’re just one voice, and that’s not enough to start a movement.

In the below scene from A Bug’s Life, the leader of a colony of bullying grasshoppers argues that an ant who stood up to him could become a potential threat to their reign.

Members of his troupe laugh off the statement, claiming one ant can’t harm anyone. He throws a grain at his fellow grasshoppers and asks them if it hurts. 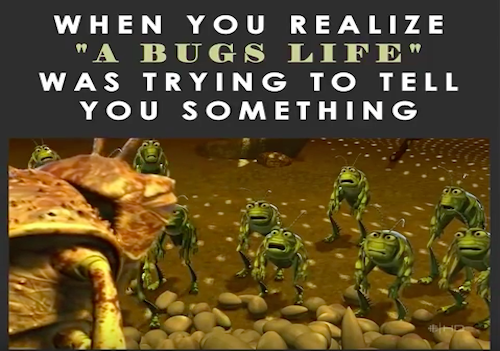 Once again, they laugh, because of course it doesn’t. Eventually he bombards them with a stream of grains, sweeping the grasshoppers off their feet.

“Those puny little ants outnumber us a hundred to one. And if they ever figure that out, there goes our way of life!

“It’s not about food. It’s about keeping those ants in line.”

This short clip conveys a powerful message: The ability of the 99 percent to take back control of their lives from the 1 percent requires everyone to get involved; one ant can initiate enough ants to band together to listen to his or her reason, logic, and solutions to come up with a collective solution.

Think of it this way: For a beautiful beach to exist, many grains of sand must accumulate, beginning with one grain, then another, then another, until eventually time and effort has paid off.

Nothing powerful comes easily. Even an erupting volcano requires magma to rise through weaknesses in the Earth’s crust to create enough pressure to be released and ultimately explode for the volcanic eruption to occur.

The word pressure in and of itself is powerful. When we put pressure on a system that seems so stable and untouchable, even that, too, can fall.

Not sure where to start? Take a look at the dialogue from a scene between the ant (Flick) and Hopper:

Hopper: Let this be a lesson to all you ants! Ideas are very dangerous things! You are mindless, soil-shoving losers, put on this Earth to serve us!

Flik: You’re wrong, Hopper. Ants are not meant to serve grasshoppers. I’ve seen these ants do great things, and year after year they somehow manage to pick food for themselves and you.

So-so who is the weaker species? Ants don’t serve grasshoppers! It’s you who need us! We’re a lot stronger than you say we are… And you know it, don’t you?

The solutions exist, that’s not the problem. The problem is getting the masses to unite in order to implement those solutions.

by Alexa Erickson / (A Bug’s Life can be purchased on DVD from Amazon, for only $2.99).
They’re Selected Not Elected – Rothschild Hosts $100,000 A Plate Dinner For... Guess Who Previous post
Meditation Does to Your Mind What Exercise Does to Your Body Next post