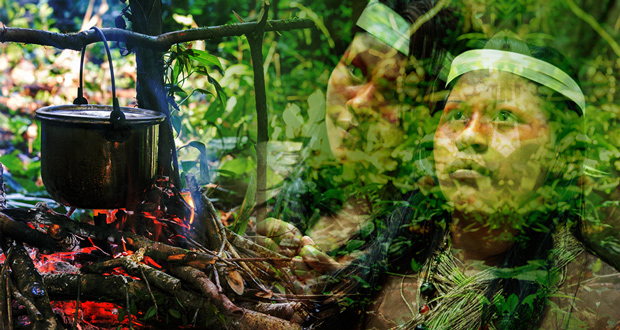 Ayahuasca Tea: Do Amazonian Tribes Hold a Cure for Cancer?

Could a tea made from plants that grow in the Amazon rainforest be an effective treatment or cure for cancer?

Ayahuasca tea is an entheogenic or psychotropic (mind altering) beverage typically made from the Banisteriopsis cap vine, often in combination with other plants.

It is a traditional spirit medicine used in healing ceremonies among indigenous peoples in and near the Amazon. Ayahuasca tea is now being used by more and more people around the world to treat all manner of medical conditions − including cancer.

Why You Haven’t Heard About Ayahuasca Tea? 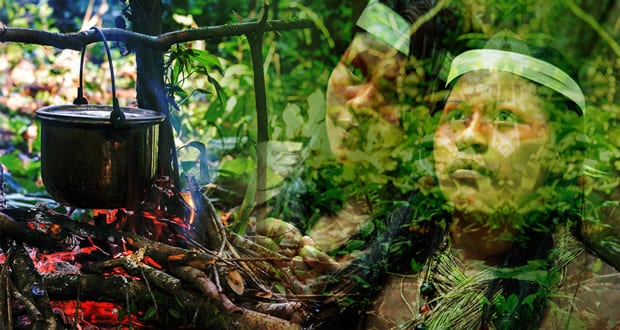 Restricted by law in some countries, ayahuasca tea is one of those cancer treatments that is considered too taboo for many in the Western world to seriously investigate. To some people it simply sounds too crazy or too dangerous.

Or even too good to be true that a plant could heal such a serious and life-threatening medical condition.

But for those suffering from a dire and deadly health problem such as cancer, should any cure be too taboo to investigate?

At The Truth About Cancer, we know that simply questioning the Western medical establishment and Big Pharma is taboo, but who cares about that when your life (or a loved one’s life) is at stake?

Ayahuasca is mostly prohibited in the U.S., thanks in large part to The Drug Enforcement Administration (DEA) − the grand authority responsible for the use of all chemicals in America.

The DEA has labeled DMT (one of ayahuasca’s constituents) a Schedule 1 drug. Such labeling renders ayahuasca generally illegal, and practically unavailable for medical research.

However, its illegal status is now being questioned in the courts on the basis of religious freedom, and a few Brazilian-based churches in the United States have won the right to import and use ayahuasca tea in their ceremonies.

Making the Case for Ayahuasca Tea

Ayahuasca is legal in Brazil and is currently being researched there for its cancer healing properties.

Eduardo E. Schenberg, who works for the Federal University of Sao Paulo in Brazil and has organized a recent study, believes the healing powers of ayahuasca deserve attention from the scientific community − especially when it comes to cancer.

In an article that was published in Sage Open Medicine, Schenberg writes:

“There is enough available evidence that ayahuasca’s active principles, especially DMT (N-dimethyltryptamine) and harmine, have positive effects in some cell cultures used to study cancer, and in biochemical processes important in cancer treatment, both in vitro and in vivo, therefore the few available reports of people benefiting from ayahuasca in their cancer treatment experiences should be taken seriously, and the hypothesis presented here, fully testable by rigorous scientific experimentation, helps to understand the available cases paving the way for new experiments.”

One Man’s Cancer Experience with Ayahuasca

Schenberg’s study reviews a number of reports of ayahuasca healing cancer, including the remarkable story of Donald M. Topping, PhD, as published in 1998 by MAPS (Multidisciplinary Association for Psychedelic Studies).

In Ayahuasca and Cancer: One Man’s Experience, Topping describes his healing journey with ayahuasca, including his inner experience of the ceremonies.

As he puts it, Western doctors had essentially condemned him to death, so he came to ayahuasca for a second opinion. His cancer was cured and he credits ayahuasca. 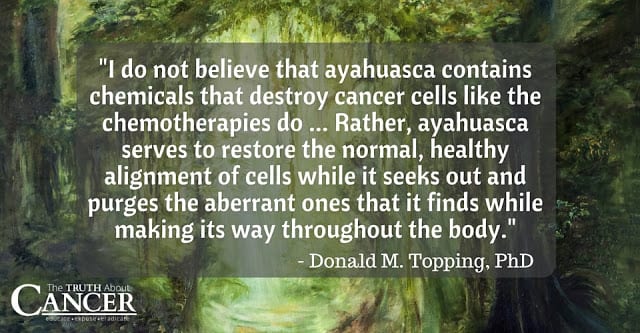 Also referenced in Schenberg’s study is a 2010 report by Robert Forte, who accompanied two cancer patients to ayahuasca sessions and clinical examinations.

One patient with prostate cancer had undergone surgery which brought his PSA level to zero, but his level was rising again ten years later. The other patient had advanced ovarian cancer with metastasis.

Both underwent clinical exams before and after ayahuasca, and both showed significant improvements.

While Forte said he intends to continue bringing interested patients to ayahuasca healers and documenting their stories, much of the evidence supporting ayahuasca having cancer curing properties is anecdotal.

Of course, everyone must choose their own path to recovery. For those who are both curious and serious, renowned Canadian doctor, Gabor Maté, has been both investigating and experimenting with ayahuasca as a treatment.

While he is quick to say it is not a panacea, or a cure-all universally applicable for everyone, he suggests that ayahuasca, in the right context and with the right support, can be an important part of the cancer treatment and healing process.

He is currently supporting cancer patients with ayahuasca under the guidance of indigenous Peruvian “Ayahuasceros.”

Note of Caution if You’re Looking into an Ayahuasca Experience

A word of caution: This article is by no means recommending the use of ayahuasca in your cancer treatment, but to let you know of sources for potential healing.

Your life and the lives of your loved ones are precious. There are risks in pursuing the ayahuasca path, the greatest of which is probably the current abundance of scammers and fake “shamans” taking advantage of those looking to experience ayahuasca.

As with all treatments, do your due diligence.

Read: Ayahuasca: Soul Medicine of the Amazon Jungle: A Comprehensive and Practical Guide

Ayahuasca and Cancer: One Man's Experience Previous post
9 Cancer Cures That Big Pharma is Hiding from Us Next post