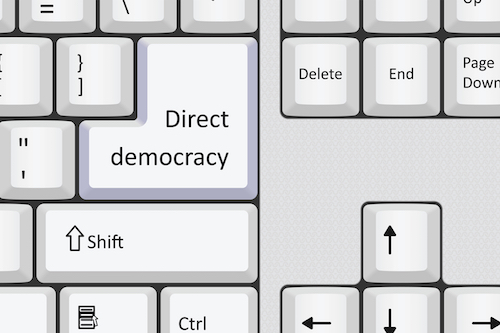 Beyond the Fake Left-Right Wing Paradigm: ‘Direct Democracy’ is an Empowering Political Solution

Direct democracy is an empowering social and political solution that we need to seriously consider, in the face of a corrupt and broken system that churns out tyrants and maintains the status quo.

It’s clear that we need a new system and a new consciousness, not a new president.

Every time election year rolls around in the US (and in other nations), the dysfunctionality of the current system is shoved in our faces.

In 2016 we have the choice between anointed establishment candidate Hillary Clinton (of the longtime Clinton crime family) and Donald Trump, ardent Zionist, probable pedophile and NWO-connected businessman. 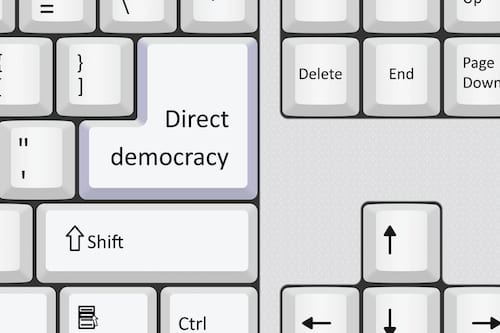 In 2004 the contest was between George W. Bush and John Kerry, both of whom just coincidentally happened to be bonesmen, i.e. they belonged to the Skull and Bones secret society, part of the network of secret societies that run the world behind the scenes.

Voting is only meaningful if you have a spectrum of candidates that represent a broad range of different positions. When all the candidates are identical on nearly all the important issues (e.g. the issuance and control of currency), there is no choice.

Voting then becomes an exercise in futility where people get trapped in a fake left-right paradigm.

However, the beauty of direct democracy is that it bypasses the need for “representatives” (who mostly represent Big Banking, Big Corporate, Big Pharma and other moneyed interests) and puts a lot of decision-making power back into the hands of the people.

What is Direct Democracy?

Direct democracy is a system where the people vote directly on all the important issues using electronic technology – desktop computers, laptop computers, tablets or smartphones. Modern technology has made this possible for people living first world nations, and hopefully will soon for the rest of the world.

In countries where internet access is common, standard, fast and often free or cheap, it is now relatively easy for the citizenry to access information, educate themselves about issues, submit votes on laws to be passed or not passed, suggest laws that need to be made or repealed, and give their general opinion on what issues need to be addressed and what areas need to be focused on.

Direct democracy is an old idea; the early democracy in Athens (where people went to local town square and voted with their hands) was like this, as is the current Swiss democracy.

As John Reid (theorganiceconomy.ca) explains in his article on direct democracy:

“Incidentally, direct democracy is not a new idea. The Swiss have enjoyed it for 700 years and although their model could use some improvements, the Swiss are the most free and democratic nation in the western world.

“For example, recently the Swiss forced a referendum on who has the right to issue the nation’s money! For those who understand that it is the present system of usury (interest) and fractional reserve lending which are the root cause of the world’s issues, this is tremendous news!

“There isn’t a politician alive that would attempt this, attempt to go up against the central bankers, because doing so would be suicide.

“This is a perfect example of the power of direct democracy, which is the power of the people. No banking institution or corporation can bribe, coerce or threaten an entire nation of voters.

“If a nation can rid themselves of central bankers then they can do anything they want, they can change everything the majority agrees to and when you understand how we can have true democracy, justice, freedom and abundance with just a few fundamental changes, you will never look back.”

As the above quote references, when was the last time a major nominee of any left-right party in any major country made the issuance of money a cornerstone of his/her campaign?

Ron Paul in the US did to some degree, but he never got nominated.

Direct democracy its not just about voting, it’s about stepping forward and collectively determining the focus and direction of our society, nation and world!

Direct democracy recognizes that everyone is unique and has their own unique gifts and perspectives to offer.

It’s about stepping into an era not of singular heroes or individual leaders, but where everyone is a leader, where everyone has an equal amount of say and power, and where everyone joins in and engages in local, state and national decisions.

How Does Direct Democracy Work?

John outlines some practical steps for how direct democracy would work at the local level:

“A town usually has a council which are elected and their job is to guard the taxpayer dollar, discuss improvements and make sure the town runs efficiently.

“Direct democracy can be implemented whereby anything over a certain dollar value or a quality of life issue (such as a proposed multi-storey building blocking resident’s views) would be researched and debated by council and put to vote by the local residents.

“This would give the residents the final say over all decisions which will or may affect them. However, the smaller issues could be dealt with as usual by the council. The same could apply to larger towns and cities.

“My own local council in Ontario, Canada meets each month and I would propose that local voting is open for the entire week afterwards so everyone has time to vote.”

The same basic idea would be applied to Government at the state (regional) and national level:

“At the federal level all decisions are major decisions and should be voted on by the people.

“Because of the removal of power from those elected, this system could possibly evolve over time to one which no longer requires an elected government but a panel of citizens overseeing each administrative department of government such as energy, education and transportation.

“In such a case general elections would no longer be necessary, rather a random selection of citizens who wish to serve a one or two-year term as a guardian of democracy and sit on a panel overseeing and keeping in check one of the many administrative or government departments.”

There may still be a need for members of Government, but with the power stripped away, the positions are less likely to attract power-hungry control freaks.

Other possibilities to keep people in check are to make the panel positions honorary, and voluntary with no pay or with a low-level pay grade where it is written into the constitution that the pay may never rise beyond inflation.

One of the best features about such a system is that anyone, regardless of gender, age, race or income, could propose a topic, a discussion and a vote. John includes some questions and answers about other possible aspects of such system:

“Q. Electronic voting has in the past been compromised. How can you guarantee security and an accurate vote count?

A. There are several ways to achieve security and accuracy with electronic voting. People have been using online banking for years now, they trust it and have no issues with it. Whatever the challenges, we are resourceful enough to overcome.

Q. Most people are too dumb to be allowed to vote?

A. That is in keeping with the present mindset, the present paradigm. Things will never improve all the while we maintain that same mindset.

We need to project into the future and see how we can gradually change and evolve with such a new way of thinking.

At first there will be many who do not fully understand certain issues and may vote the wrong way but over time, as people become engaged and discuss the upcoming votes they will naturally become more aware of what is going on and how their vote affects them.

Q. If every voter can propose an idea, how do we stop the time wasting of frivolous proposals. What if I proposed free beer for all men between the ages of 21 and 35, what happens then?

A. All proposals have to be qualified by the people, this will remove frivolous proposals from the vote. How this works is at vote time there are 2 lists, potential proposals and qualified or real proposals.

The first list is stage one, this is where the people decide if the proposal should be included in the next round of research and debates for the real vote.

If a majority agree that the idea or proposal has merit then it goes to the panel for further research and debate and prepared for the real vote.

The panel would consist of experts and regular people who sign up to participate in the process for a set period of time.

Q. What happens if we vote yes for an idea which turns out to be a bad thing?

A. Anyone can propose to amend or remove it. This is an exciting aspect of direct democracy, by trial and error we eventually find stability and equilibrium, the lowest common denominator by which the nation is in harmony.

This is also far sooner than waiting for change for years as we do at present, and then nothing really changes!”

John has included many more answers and questions, so please visit his article for further information.

No one has all the answers or every single detail worked out yet, but why do they need to?

Isn’t there enough in the idea already to seriously consider it and discuss it with others? We don’t have to every every little wrinkle ironed out before trying a new system.

Direct Democracy May Be the Revolution of Consciousness We Need

It is natural to want a revolution or massive change when you learn how deeply unjust the current system is, but we have to remember that violent and bloody revolutions get us nowhere.

Violence only begets more violence, and since Government is a creature of force, it will respond in kind when attacked, which will give politicians the excuse to further entrench the police state and enact harsher laws.

The only revolution that will succeed will be the revolution of consciousness.

Some may prefer to phrase this as an evolution of consciousness, since we are clearly still in the process of evolving, spiritually and emotionally as well as socially and politically.

From this perspective isn’t it natural that we would change our political system as we develop our awareness and understanding?

Yes, representative democracy may be better than totalitarianism or despotic monarchy, but why do we think it’s the best? Why do some of us think we are at the pinnacle of creating the most perfect social structure?

Cut Out the Middleman For Good

The only way to stop an out-of-control Government is to ignore it, bypass it and make it irrelevant. In this way, it is starved of its power.

Direct democracy is a superb way of bypassing Government and cutting out the middle man who is no longer a true or loyal representative.

The same thing happened in the history of religion when people awoke and realized they didn’t need religious middleman (priests) to tell them how to live and how to get to God or Heaven.

The Catholic Church has lost some of its control ever since. The same thing happens when we represent ourselves in court as sovereigns, instead of allowing an attorney (whose sworn loyalty is to the court above all else) to represent us.

Direct democracy requires more participation and more awareness, but the benefits are enormous, and with less Government comes less taxation (not just the income tax, but the other 99+ taxes Americans are faced with) and therefore, more money, more time and more sovereignty.

Spread this article and spread the word, so people can begin to realize the possibilities and potentials that await us once we reject the fake left-right paradigm.

PsyWar — The Battle for Your Mind Previous post
6 Years & Thousands of Deaths Later, UN Admits it Imported Cholera to Haiti Next post