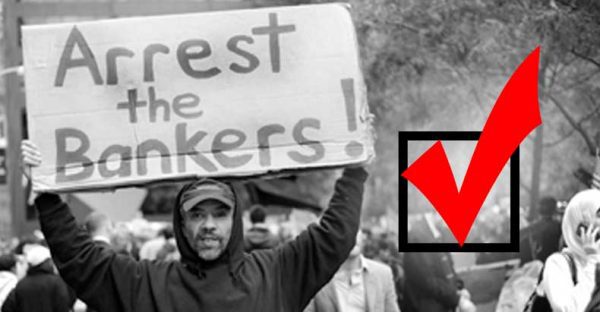 First Senior Bankers on the Planet Responsible for 2008 Collapse Jailed

While low-level bankers have been thrown in jail as apparent scapegoats in places like Iceland, not a single high-level CEO or officer has faced punitive criminal action — until now.

On Friday, three senior Irish bankers were jailed for up to three-and-a-half years for their conspiracy to defraud investors, subsequently causing the economic collapse of 2008. 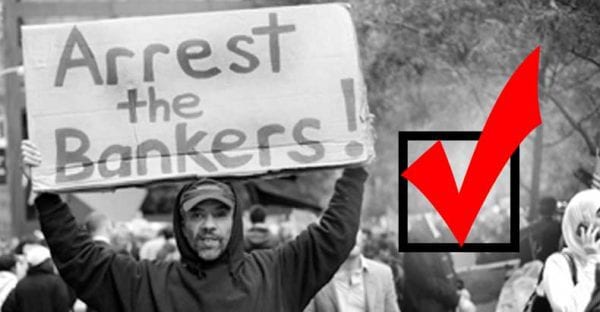 According to a report in Reuters, the trio will be among the first senior bankers globally to be jailed for their role in the collapse of a bank during the crisis.

Watching these criminal bankers use the governments of the world to fleece the taxpayers in a series of bailouts and scams to defraud the people has been infuriating.

“The lack of convictions until now has angered Irish taxpayers, who had to stump up 64 billion euros – almost 40 percent of annual economic output – after a property collapse forced the biggest state bank rescue in the euro zone.

“The crash thrust Ireland into a three-year sovereign bailout in 2010 and the finance ministry said last month that it could take another 15 years to recover the funds pumped into the banks still operating.

“Willie McAteer, former finance director at the failed Anglo Irish Bank, and John Bowe, its ex-head of capital markets, were given sentences of 42 months and 24 months respectively.”

Unlike the bankers who remain protected in America’s legal system, the Irish have decided to lay down the law.

“By means that could be termed dishonest, deceitful and corrupt they manufactured 7.2 billion euros in deposits by obvious sham transactions,” Judge Martin Nolan told the court, describing the conspiracy as a “very serious crime”.

In the United States, the people have been forced to file their own legal action against the criminal bankers as the government does absolutely nothing to stop their crimes.

Despite the bankers’ best attempts at foiling the private actions against them, the people have pushed through.

“Requiring the banks to pay treble damages to every plaintiff who ended up on the wrong side of an independent Libor‐denominated derivative swap would, if appellants’ allegations were proved at trial, not only bankrupt 16 of the world’s most important financial institutions, but also vastly extend the potential scope of antitrust liability in myriad markets where derivative instruments have proliferated,” the U.S. Court of Appeals in New York said in the ruling.

Until the people wake up to the atrocities being carried out against them by criminal bankers who control the government, this fleecing of the citizenry will continue.

To all those who bank with any of these huge banks — pull your money out today, move it to a local bank, or find another alternative.

Failing to do so only sustains their criminal behavior. Please share this story with your friends and family as it will most assuredly be a mere blip on their televisions and deliberately easy to miss.

Liberation from the Greys of Orion Previous post
Parts of the Independent Media: Losing Their Compass Next post