World’s Billionaires Are Stockpiling Cash: ‘Taking Money Off the Table’

When things risk going wrong, cash is king… and kings have cash. And with enormous fortunes being made – and destroyed – overnight.

The world’s billionaires have shifted into stockpiling an average of 22% of their income in cash because they are terrified the economy could crash.

Many of these people literally helped to build the system we all now rely upon, and now they are holding cash, gold and other assets our of fear that stocks will crash and digital instruments of wealth could be undermined, compromised or have their balance destroyed.

The group has also benefited from the recent surge in so-called liquidity events from corporate acquisitions and mergers. Altogether, their cash hoard is now roughly the size of the Brazil’s GDP.

“Billionaires are taking money off the table where available, while uncertainties in the economy and the historical highs found in deals have resulted in cash-flush portfolios,” the report said.

The firm’s findings are in line with those from other recent surveys. A study released by UBS last month said wealthy Americans are keeping around 20 percent of their portfolios in cash, in line with their post-2008 average.

More are considering reducing their exposure to the markets because of uncertainty over the presidential election, UBS said.

And it isn’t just cash. With the gold price still off its 2011 highs, precious metals have become an extremely attractive option as well.

George Soros reportedly converted 37% of his stocks into gold – a huge amount of gold – just weeks before the Brexit sent the price of the British pound into freefall.

The big boys are opting out of the very system we have grown comfortable with. What do they know that we don’t? And what happens when that reality hits?

Nothing will work, and your ATM will look like this, or offer severe cash restrictions: 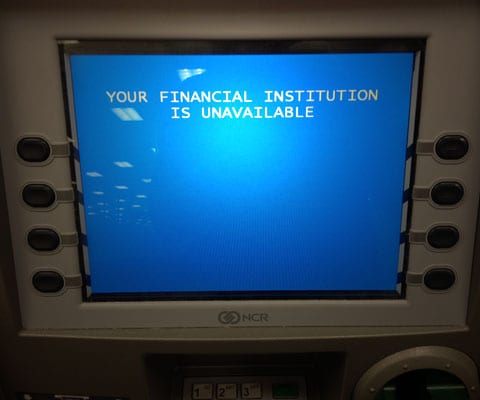