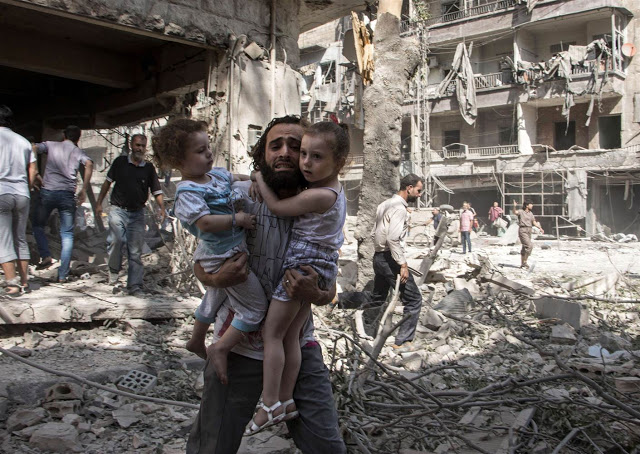 I Am A Syrian Living in Syria: ‘It Was Never a Revolution Nor a Civil War. The Terrorists Are Sent by Your Government’

Two years ago, “Majd” wrote these words on a Facebook posting:

“I am Syrian… living in Syria in the middle of everything. We have seen horrors. It was never a revolution nor a civil war. The terrorists are sent by your government.

They are al Qaeda Jabhat al Nusra Wahhabi Salafists Talibans etc and the like extremists jihadists sent by the West and the Saudis and Qatar and Turkey. 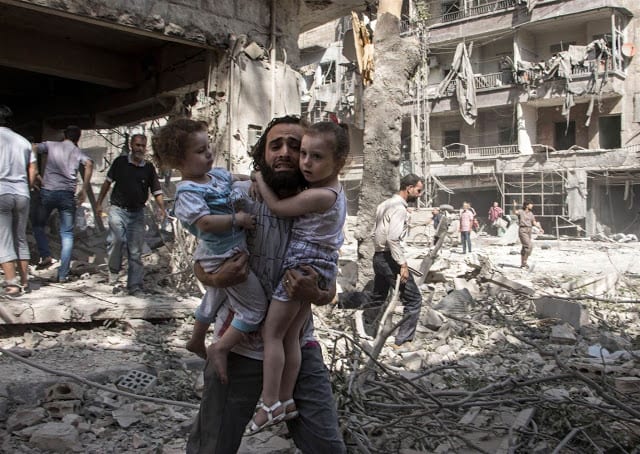 Your Obama and whoever is behind him or above him are supporting al Qaeda and leading a proxy war on my country. We thought you are against al Qaeda and now you support them.

The majority here loves Assad. He has never committed a crime against his own people… the chemical attack was staged by the terrorists helped by USA and UK etc… everyone knows that here.

American soldiers and people should not be supporting barbarian al Qaeda terrorists who are killing Christians, Muslims in my country and everyone.

Every massacre has committed by them. We were all happy in Syria = we have free school and university education available for everyone, free healthcare, no GMO, no fluoride, no chemtrails, no Rothschild IMF — controlled bank, state owned central bank which gives 11% interest, we are self-sufficient and have no foreign debt to any country or bank.

Life before the crisis was so beautiful here. Now it is hard and horrific in some regions.

I do not understand how the good and brave American people can accept to bomb my country who has never harmed them and therefore help the barbarian al Qaeda. These animals slit throats and behead for pleasure… they behead babies and rape young kids.

They are satanic. Our military helped.by the millions of civilian militias are winning the battle against al Qaeda but now the usa want to bomb the shit out of us so the al Qaeda can get the upper hand.

Please help us American people. They are destroying the cradle of civilization. Stop your government.

Impeach that bankster puppet ape you have as president… support Ron Paul or Rand or anyone the like who are true American patriots. But be sure of one thing: if they attack and I think they will, it will be hell.

Be sure that it be world war and many many will die. Syria can and will defend itself and will sink many US ships. Iran will go to war.

Russia and China eventually if it escalates… and all this for what ? For the elites who created al Qaeda through the US gvt and use it to conduct proxy wars and destabilize countries who do not go along with their new world order agenda !?

American people… you gotta regain control of your once admirable country. Now everyone hates you for.the.death you bring almost everywhere.

Ask the Iraqis…the Afghans…the Pakistanis…the Palestinians… the Syrians… the Macedonians and Serbs…the Libyans… the Somalis… the Yemenis… all the ones you kill with drones everyday. Stop your wars stop wars. Enough wars. Use diplomacy, dialogue… help… not force.”

Consistent testimonies from Syrians, as well as well-documented, open-source Western sources, and historical memory, all serve to reinforce the accuracy of the aforementioned testimony.

Syrians are living the horror brought to them by the criminal West. They can not afford the complacency of shrugging their shoulders in indecision, not when their lives and their ancient civilization is being threatened by Western-paid terrorist mercenaries of the worst kind.

“Our” proxies, slit throats, chop heads, and take no prisoners as we waffle in indecision, ignore empirical evidence, and take the comfortable easy road of believing the labyrinth of lies promulgated by Western media messaging.

The veil of comfortable confusion, nested in an unconscious belief that our government knows best or that it is patriotic to believe the lies and fabrications implicit in the hollow words of politicians (who no longer represent us) and the false pronouncements of Imperial messengers, is concealing an overseas holocaust.

Western societies are rotting from the inside out because of these lies and this barbarity.  We are protecting a criminal cabal of corporate globalists who do not serve our interests and never will.

Our democracies, which we should be protecting, have long disappeared – except in the hollow words of newspaper stenographers. Instead we are supporting transnational corporate elites and their delusional projects.

Poverty and disemployment are all soaring beneath the fakery of government pronouncements, as the public domain evaporates beneath words like “efficiency” or the “economy” — all false covers that serve to enrich elites and destroy us. Internal imperialism at home is a faded replica of the foreign imperialism abroad.

As countries are destroyed, and its peoples are slaughtered — think Syria, Libya, Ukraine, and others — by abhorrent Western proxies — public institutions are contaminated, and ultimately replaced by parasitical “privatized” facsimiles.

Public banking is looted and destroyed in favour of transnational banksterism, World Bank funding, and IMF usury. Food security is destroyed and replaced by biotech tentacles and engineered dependencies on cash crops and unhealthy food.

Currencies are destroyed, sanctions are imposed, and the unknown, unseen hand of totalitarian control imposes itself, amidst the cloud of diversions and confusions, aided by comprador regimes, oligarch interests, and shrugging domestic populations.

Syria refuses to submit. That is why the West is taught to hate her, and the rest of the world learns to love and respect her.

Yet, Syria’s struggles are our struggles. Syria represents international law, stability, and integrity: the same values that western peoples overtly cherish but stubbornly reject, as our countries wilt beneath suffocating veils of lies and delusions.

In the name of justice, humanity, and the rule of law, I support the elected government of Syria led by its President, Bashar al-Assad. Syria, an ancient cradle of civilization, is leading the way towards a better future for all of us.

All we have to do is open our eyes.