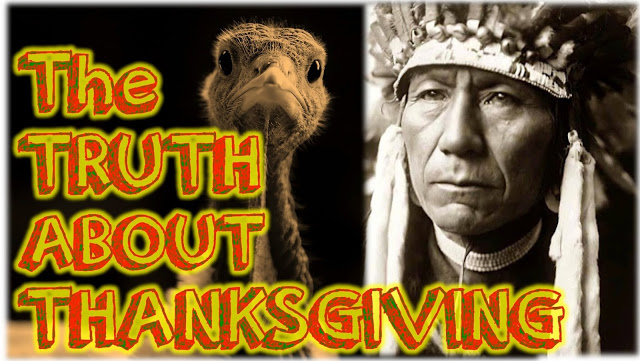 Celebrating Genocide With Genocide — The Truth About Thanksgiving

Thanksgiving is a wholesome time to come together with family. A time to eat delicious food prepared with love. A time to reflect on everything you have to be grateful for.

And when you really take a step back and look at this heartwarming holiday, you realize that Thanksgiving is seriously [email protected]#&% up.

Now I’m not here to spoil your holiday or invalidate your family traditions. I simply want to take a look at both the origins of Thanksgiving and the current practices involved with its observance; Thanksgiving, for all its warm and fuzzy feelings is essentially the celebration of genocide with a genocide.

Let me explain: We’ll first a look at the origins of Thanksgiving, and then we’ll move onto current practices. It may seem for a bit that I’ve gone off my vegan rocker into a history lesson but I promise I’ll bring it back to the animals. 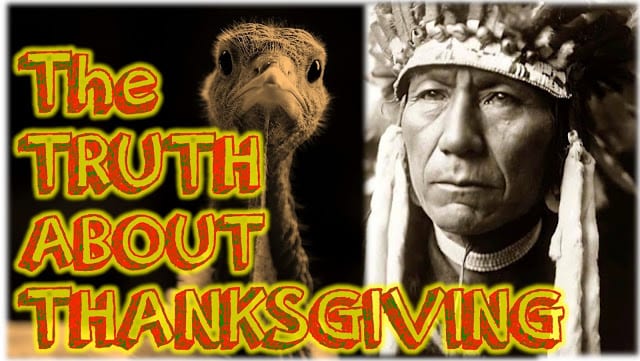 The History of Thanksgiving

So, there is a bit of debate as to the actual date and circumstances of the first Thanksgiving. proposed dates range anywhere from 1565 to the latter 1600s. I’m going to focus on two of the more accepted accounts, one a little more warm and fuzzy than the other.

One of the more highly cited, and more wholesome-feeling first Thanksgiving was in 1621 with the pilgrims and the Wampanoag Indians.

According to some of the scant records, Squanto of the Patuxet tribe, who has survived slavery under the English, negotiated a treaty between the Wampanoag Nation and the pilgrims, an element of which offered mutual protection.

The pilgrims has just harvested their first crop and were “exercising their arms,” meaning firing their guns.

The understanding is that Massasoit, the Pokanoket Wampanoag leader heard this and came to aid in a supposed attack.

When he and his warriors arrived they were invited to join the feast, though they had return with more food as there wasn’t enough there. this feast apparently lasted three days.

Today, this relationship established between the Wampanoag and the pilgrims is mourned by the Wampanoag who gather every year with hundreds of native people at Cole’s Hill overlooking Plymouth Rock for the national day of mourning.

Before 1616, the Wampanoag numbered 50,000-100,000. The arrival of European traders brought along a deadly plague, which killed up to two-thirds of their population, while many others were captured and sold as slaves. And yet these people still welcomed the pilgrims.

The second highly cited first Thanksgiving, and one much less wholesome-feeling, occurred in 1637, said to be the first officially proclaimed all-pilgrim Thanksgiving.

The Massachusetts Bay Governor, John Winthrop, declared this feast “a celebration and thanksgiving for subduing the Pequots [one of the native tribes].”

It was essentially a victory feast for the massacre of the Pequot people. See, the Pequot had not agreed to the treaty Squanto had created with the Wampanoag.

Their tribe had already been reduced from 8,000 to 1,500 by English-borne diseases, and around time of the massacre the Pequots were celebrating their annual green corn dance ceremony.

In the predawn hours, English and Dutch mercenaries surrounded the sleeping Pequot and ordered them to come outside. Those who did were clubbed to death or shot and those remaining inside shelters were burned alive.

“Those that escaped the fire were slain with the sword; some hewed to pieces, others run through with their rapiers, so that they were quickly dispatched and very few escaped. it was a fearful sight to see them thus frying in the fire…horrible was the stink and scent thereof, but the victory seemed a sweet sacrifice.”

It was the day after this that Governor Winthrop declared the day of celebration and thanksgiving in honor of this horrific event.

So that is the groundwork for our Thanksgiving holiday. Built on the genocide and violent destruction of an entire people.

Now you may be saying that this is tragic and inexcusable, but it’s not what people are celebrating on Thanksgiving today.

The modern holiday is far removed from this showcase of our inhumanity.  However, I’d like to challenge this claim: while perhaps our intentions and thoughts are nowhere near this historic genocide, our actions are incredibly in concert with those early settlers.

You see, we, knowingly or not, celebrate this original genocide with a second genocide.  And that is the genocide of turkeys.

Read more here: Everything You Know About Thanksgiving is Wrong

Now you may scoff at this concept of a turkey genocide, but what turkeys go through is nothing short of horrific, barbaric, and terrifying.

According to the USDA, more than 45 million turkeys are killed in the United States just for thanksgiving. That’s one sixth of all the turkeys sold in the US each year.

Before being slaughtered, turkeys spend their shortened lives cramped on top of one another, even in so-called free-range and cage-free facilities, a term which means nothing.

Due to these atrocious conditions, turkeys are rife with disease, respiratory infections, ulcerated feet, blistered breasts, and ammonia-burned eyes. They are pumped full of antibiotics yet 75-100 percent still contain disease when they reach the slaughterhouse.

They are bred to grow so fast and abnormally large that they are made lame by their own weight and often have to use their wings to reach food and water. Were a human child to grow at this rate, it would weigh 1,500 pounds by 18 weeks of age.

Because of their size and inability to move properly, turkeys must be sexually violated to breed them. The makes are assaulted for their semen, which his forced into the females.

At birth, turkeys are mutilated. They are painfully debeaked and detoed without any anesthetic.

When they are only 12 to 26 weeks old, turkeys are grabbed by their feet and jammed into crates without food or water and shipped out to slaughter.

There is no law in the US to regulate the treatment of birds during the catching, transport and slaughter process.

Once at the slaughterhouse, they are strung up by their feet, especially painful for this unnaturally large birds.

They may also be stunned by an electrical stunner or run through an electrified water bath so their feathers come out more easily. they are conscious for this process and then have their throats cut.

This is the process that is repeated 45 million times every year for American Thanksgiving alone, as we come to the table to show our thanks, very literally honoring the memory of our country’s original genocide with the now longest-running and bloodiest genocide of our species’ history.

So I’ll say it again. Thanksgiving is seriously [email protected]#&% up.