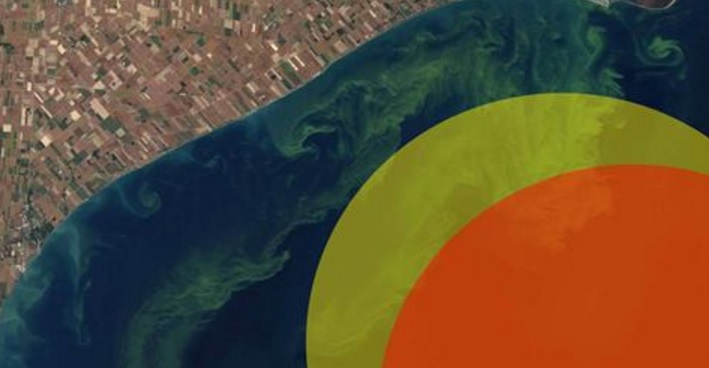 Seaborne radiation from Japan’s Fukushima nuclear disaster has been detected on the West Coast of the United States.

Cesium-134, the so-called fingerprint of Fukushima, was measured in seawater samples taken from Tillamook Bay and Gold Beach in Oregon, researchers from the Woods Hole Oceanographic Institution are reporting.

Because of its short half-life, cesium-134 can only have come from Fukushima.

Also for the first time, cesium-134 has been detected in a Canadian salmon, the Fukushima InFORM project, led by University of Victoria chemical oceanographer Jay Cullen, is reporting. 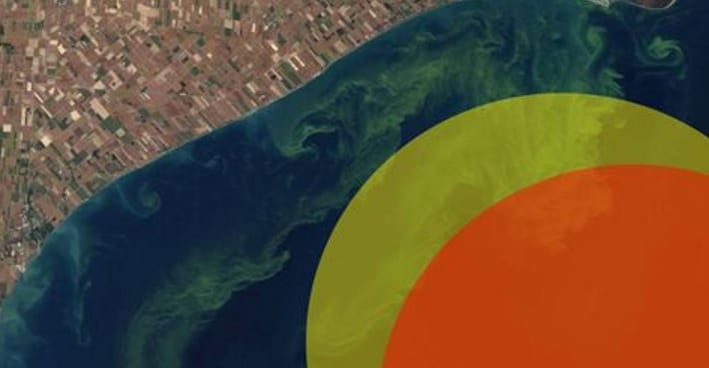 In both cases, levels are extremely low, the researchers said, and don’t pose a danger to humans or the environment.

Massive amounts of contaminated water were released from the crippled nuclear plant following a 9.0 magnitude earthquake and tsunami in March 2011. More radiation was released to the air, then fell to the sea.

Woods Hole chemical oceanographer Ken Buesseler runs a crowd-funded, citizen science seawater sampling project that has tracked the radiation plume as it slowly makes its way across the Pacific Ocean.

The Oregon samples, marking the first time cesium-134 has been detected on U.S. shores, were taken in January and February of 2016 and later analyzed. They each measured 0.3 becquerels per cubic meter of cesium-134.

Buesseler’s team previously had found the isotope in a sample of seawater taken from a dock on Vancouver Island, B.C., marking its landfall in North America.

Meanwhile, in Canada, Cullen leads the InFORM project to assess radiological risks to that country’s oceans following the nuclear disaster. It is a partnership of a dozen academic, government and non-profit organizations, including Woods Hole.

Last month, the group reported that a single sockeye salmon, sampled from Okanagan Lake in the summer of 2015, had tested positive for cesium-134.

The level was more than 1,000 times lower than the action level set by Health Canada, and is no significant risk to consumers, Cullen said.

Buesseler’s most recent samples off the West Coast also are showing higher-than background levels of cesium-137, another Fukushima isotope that already is present in the world’s oceans because of nuclear testing in the 1950s and 1960s.

Those results will become more important in tracking the radiation plume, Buesseler said, because the short half-life of cesium-134 makes it harder to detect as time goes on.

Cesium-134 has a half-life of two years, meaning it’s down to a fraction of what it was five years ago, he said. Cesium-137 has a 30-year half-life.

A recent InFORM analysis of Buesseler’s data concluded that concentrations of cesium-137 have increased considerably in the central northeast Pacific, although they still are at levels that pose no concern.

They estimated that the plume is moving toward the coast at roughly twice the speed of a garden snail. Radiation levels have not yet peaked.

“As the contamination plume progresses towards our coast we expect levels closer to shore to increase over the coming year,” Cullen said.

Even that peak won’t be a health concern, Buesseler said. But the models will help scientists model ocean currents in the future.

That could prove important if there is another disaster or accident at the Fukushima plant, which houses more than a thousand huge steel tanks of contaminated water and where hundreds of tons of molten fuel remain inside the reactors.

In a worst-case scenario, the fuel would melt through steel-reinforced concrete containment vessels into the ground, uncontrollably spreading radiation into the surrounding soil and groundwater and eventually into the sea.

“That’s the type of thing where people are still concerned, as am I, about what could happen,” Buesseler said.

Scientists now know it would take four to five years for any further contamination from the plant to reach the West Coast. 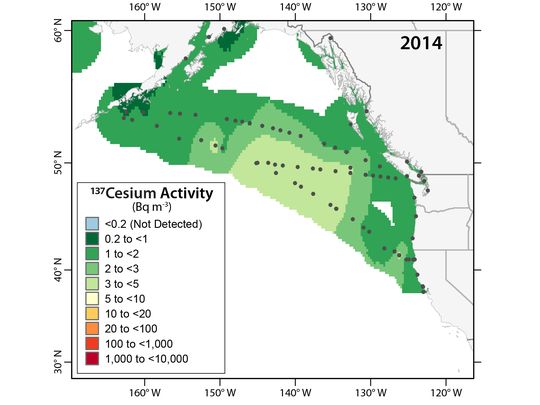 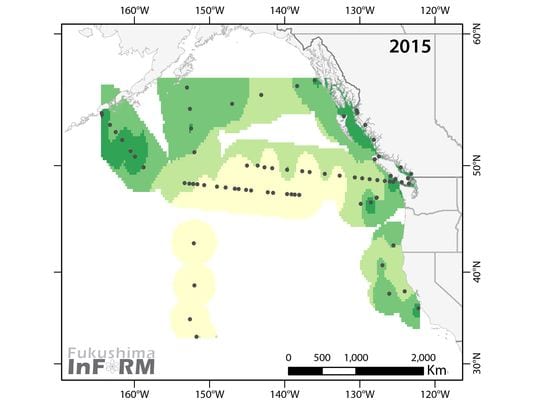