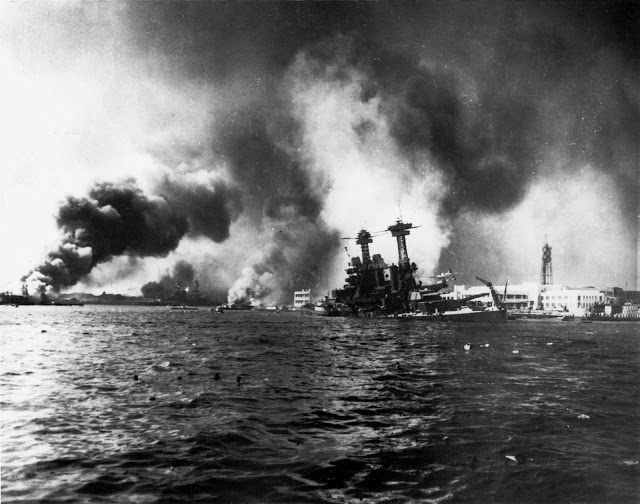 The Pearl Harbor false flag operation of December 7th, 1941 which provided the excuse for the US to enter World War 2 is about to be celebrated once again.

This Wednesday (December 7th, 2016) will be the Pearl Harbor 75th Anniversary event.

The horrific event was yet another in a long long line of false flag operations that have been carried out by unscrupulous criminals (our misleaders) over the years.

Just as with the 9/11 false flag attack, around 3000 American lives were sacrificed so that the US Government had the pretext they needed to go to war.

As the 75th anniversary approaches, it is appropriate to cast our gaze back in time and set the record straight on the Pearl Harbor false flag op in the hope that this information will spread far and wide, and prevent future leaders from using this hackneyed tactic to trick people into submission and achieve their dark political and geopolitical goals. 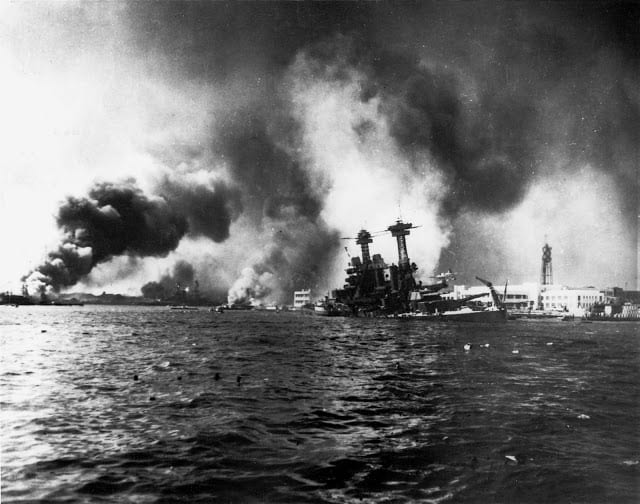 The Pearl Harbor False Flag Motive: Providing a “Legitimate” Cover Story for the Long-Planned Entry of the US into WW2

To begin with, the Pearl Harbor attack is not a false flag op in the sense that the US attacked in its own ships and planes.

It is a false flag in the sense that at the very least Roosevelt let it happen, and as the evidence will show, he made it happen.

Most of the US Pacific fleet of planes and ships were intentionally left there as sitting ducks with no air protection, an easy target for the Japanese torpedo planes. The Japanese managed to destroy nearly 20 American naval vessels, including 8 massive battleships and over 300 airplanes.

The “surprise” attack proved to be an easy excuse for Roosevelt to convince the American people and Congress to enter WW2.

(Yep, those were the days when the US President actually followed the Constitution more [although Roosevelt was still a criminal of course for his actions here], unlike Obama who has tried throughout his 8-year tenure to go to war without Congressional approval.)

After all, who would begrudge a nation declaring on war on another nation, after the former had been attacked for no apparent reason?

The collective mindset 75 years ago was quite different to show it is today. People trusted their leaders more; people were more patriotic and nationalistic; and there was no internet or easy way for people to “fact check” their leaders to tell if they were lying or not. 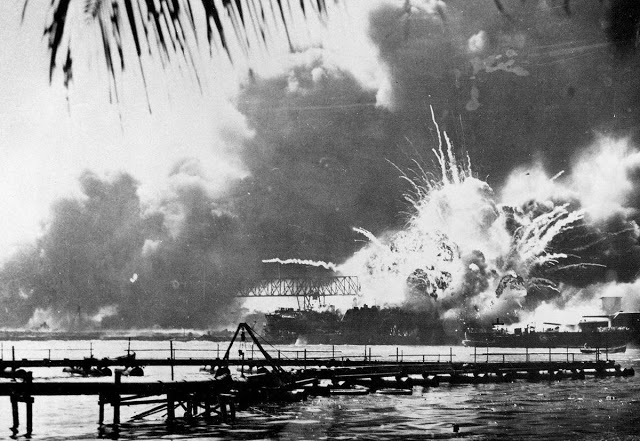 Before we examine the evidence that Roosevelt knew full well that Pearl Harbor was going to happen, we need to consider how wars are really run.

Wars occur on the surface between nations, but really, it is the dark force of the international banking cabal that pulls the strings behind the scenes to aggravate opposing sides, instigate tension and encourage conflict.

Then it funds both sides to ensure there is a war, and can often decide the outcome of the war by choosing which side to fund more heavily.

Mark Twain observed that while history may not repeat itself, it sure does rhyme. A similar type of false flag operation also occurred during WW1, when Germany sank the British Lusitania ship (which was carrying Munitions) on its way from New York to England.

There was foreknowledge – the German embassy in the US had placed an advertisement in the newspaper warning people that sailing on the Lusitania could be dangerous. Even the biased and controlled Wikipedia admits:

Woodrow Wilson assured the population that the US would not enter WW1, and was elected partly on the basis of that pre-election promise, but when Americans were killed, what was he supposed to do, right? Ditto for Roosevelt. Same old scam. History rhymes.

Turning now to Pearl Harbor false flag event itself, some of the best information can be found in the book Day of Deceit by author Robert Stinnett, who served in the US Navy during WW2.

His research includes declassified documents which were withheld from the American public for over 60 years.

Stinnett’s work shows that there were really 3 conspiracies surrounding the event: the first was to induce Japan to attack America and thus provide an unbeatable pretext for America to enter World War 2; the second was to deprive the Pearl Harbor commanders of available information about Japan’s intentions; and the third was to ensure that all evidence of foreknowledge from the public. 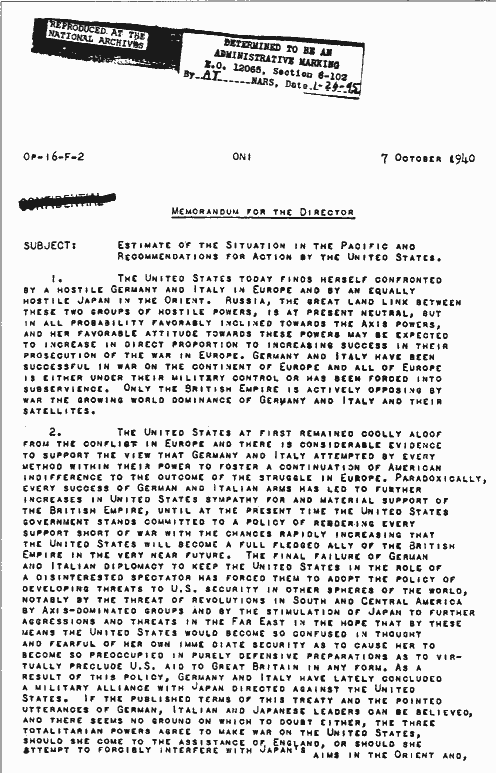 Stinnett includes a memorandum that he obtained under FOIA by Japanese expert Captain Arthur McCollum, chief of the Far Eastern Section of Naval Intelligence, dated October 7, 1940.

This nefarious McCollum memo (pictured above) listed an 8-point plan to induce Japan “to commit an overt act of war”.

In an interview in 2002, Stinnett was asked whether FDR saw the memo:

“Is there any proof that FDR saw McCollum’s memorandum?
Stinnett: There’s no proof that he actually saw the memorandum, but he adopted all eight of the provocations — including where he signed executive orders… And other information in Navy files offers conclusive evidence that he did see it.”

Here are the 8 points McCollum advocated, all of which Roosevelt performed or arranged (some over the objections of Commander-in-chief of the US fleet James Richardson):

Point F is highly significant, because it allowed the Japanese to destroy a major part of the US fleet, thus maximizing the injury in the public’s perception – which was after all the ultimate target that day.

In addition to coaxing the attack in many ways, the US also allowed a Japanese naval spy carte blanche to spy on the base at Pearl Harbor and transmit information back to Japan in preparation for the attack.

Conspiracy #2: Crack the Japanese Code but Keep ‘Em in the Dark

That’s what went on with the Pearl Harbor commanders, Admiral Kimmel (Commander in Chief of the US Fleet) and Lt. General Short (head of the US Army Defenses at Pearl Harbor), who were denied the critical information they needed to prepare for and defend against the attack.

According to Stinnett, US cryptographers had deciphered Japan’s diplomatic code (known as MAGIC). They had also deciphered some of Japan’s military codes, which meant that they could understand the messages they were intercepting in the Pacific.

The significant information that was received from these intercepts (such as the Japanese Task Force’s last-minute choice for its staging area, its destination and its attack order) was deliberately withheld from Kimmel and Short.

Around 2 weeks before the attack occurred (on November 23, 1941) Kimmel had ordered (without White House approval) a search for Japanese forces north of Hawaii.

He had actually moved the fleet into the North Pacific. However, once White House officials learned of this, they ordered the ships back to Pearl Harbor.

Another piece of evidence is that on November 25, the Navy headquarters in Washington ordered Kimmel to route all transpacific shipping southward leaving the north Pacific conveniently open, allowing Japan to attack with no intervening vessels.

There is a considerable amount of foreknowledge, in addition to the points above. Here are some more examples:

– Roosevelt wanted to “win the war together” with England. As James Perloff writes:

“Roosevelt dispatched his closest advisor, Harry Hopkins, to meet British Prime Minister Winston Churchill in January 1941. Hopkins told Churchill: “The President is determined that we [the United States and England] shall win the war together …”
Roosevelt’s intentions were nearly exposed in 1940 when Tyler Kent, a code clerk at the U.S. embassy in London, discovered secret dispatches between Roosevelt and Churchill.
These revealed that FDR — despite contrary campaign promises — was determined to engage America in the war. Kent smuggled some of the documents out of the embassy, hoping to alert the American public — but was caught.”

– On November 25th, 1941, FDR received a “positive war warning” from Churchill that the Japanese would strike against America at the end of the first week in December.

This warning caused the President to do an abrupt about-face on plans for a time-buying modus vivendi with Japan and it resulted in Secretary of State Hull’s deliberately provocative ultimatum of November 26th, 1941, that guaranteed war.

– On November 26th, 1941. Washington ordered both US aircraft carriers, the Enterprise and the Lexington, out of Pearl Harbor “as soon as possible”. This order included stripping Pearl of 50 planes or 40% of its already inadequate fighter protection.

On the same day Cordell Hull issued his ultimatum demanding full Japanese withdrawal from Indochina and all China. The US Ambassador to Japan called this “the document that touched the button that started the war.”

– On November 29th, 1941, Hull told United Press reporter Joe Leib that Pearl Harbor would be attacked on December 7. The New York Times reported on December 8th (“Attack Was Expected,” p. 13) that the US knew of the attack a week earlier.

– On December 1st, 1941, the Office of Naval Intelligence, ONI, 12th Naval District in San Francisco found the missing Japanese fleet by correlating reports from the 4 wireless news services and several shipping companies that they were getting signals west of Hawaii.

– On December 5th, 1941, FDR wrote to the Australian Prime Minister, “There is always the Japanese to consider. Perhaps the next four or five days will decide the matters.”

– Stinnett aso notes that it was reported that before the bombing occurred, newspapers were delivered detailing the attack.

So, as the Pearl Harbor 75th anniversary approaches, approach it from an informed perspective.

Those 3,000 Americans died for a lie. Just as with 9/11, thousands of American lives were sacrificed so the US criminal elite had an excuse to go to war.

The US was worried by industrial and military strength of Nazi Germany and needed a backdoor way to enter the war against Germany. Staging a Pearl Harbor false flag op was the only way, leading officials felt, to galvanize the reluctant American public into action.

Pearl Harbor was a carefully orchestrated plot adopted by US President Franklin Roosevelt to lure Japan into attacking and starting a war with the US. It’s time for everyone to know the truth.