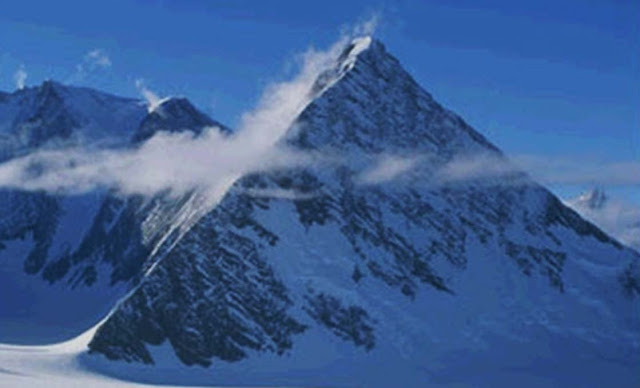 The World Wide Web is all abuzz with Google Earth images of Antarctica that appear to show pyramids in the icy landscape.

The images show what appears to be three pyramids with four sides similar to the famous Giza pyramids in Egypt. Could these be authentic man-made pyramids created by an ancient civilization?

Who Made the Pyramids?

There are numerous theories about the origin of these pyramids. Some of the more controversial suggestions are that the pyramids were remnants of an earlier Atlantean civilization in Antarctica, or that they were built by extraterrestrials. 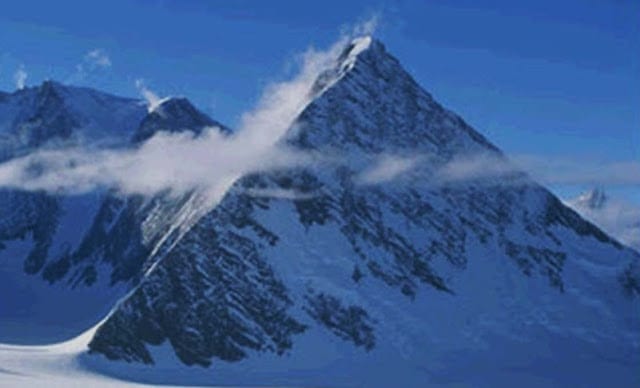 Other researchers have suggested a natural geological explanation for the Antarctica pyramids.

These scientists have suggested that the “pyramids”, may actually be nunataks. Nunataks are the peaks of mountains that protrude through the ice and are higher than the surrounding terrain.

The Research of Dr. Charles Hapgood

Two of the ‘Antarctica pyramids’ can be found 10 miles (16 kms) from the coast. The third pyramid is located near the shoreline.

The discovery of these pyramids suggests that Antarctica may have been inhabited by humans sometime in the past 6,000 years.

It was around this time that man was building pyramids in the Old World. Charles Hapgood’s research supports the possible existence of an ancient civilization on a continent which is now covered by ice.

In Maps of the Ancient Sea Kings, Dr. Charles Hapgood published the Piri Reis Map of Antarctica. This 16th century map shocked the world because it showed the way Antarctica looked without ice.

The Piri Reis map was found in Turkey. A Turkish Navy officer sent the map to the U.S. Navy Hydro Graphic Bureau in 1953. M.I. Walters, the Chief Engineer of the Bureau, sent the map to Arlington H. Mallery to be evaluated.

Mallery determined that Piri Reis map was completely accurate and may have been copied from a map made 6,000 years ago. 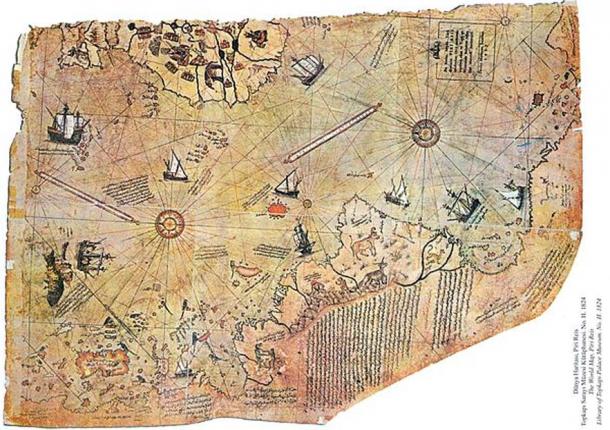 Map of the world by Ottoman admiral Piri Reis, drawn in 1513. (Public Domain)

Olhmeyer, leader of the British-Swedish expedition to Antarctica wrote Hapgood the following letter:

Dear Professor Hapgood,
Your request of evaluation of certain unusual features of the Piri Reis Antarctica map of 1513 by this organization has been reviewed. The claim that the lower part of the map portrays the Princess Martha Coast of Queen Maud Land, Antarctic, and the Palmer Peninsular, is reasonable.
We find that this is the most logical and in all probability the correct interpretation of the map.
The geographical detail shown in the lower part of the map agrees very remarkably with the results of the seismic profile made across the top of the ice-cap by the Swedish-British Antarctic Expedition of 1949.
This indicates the coastline had been mapped before it was covered by the ice-cap. This part of Antarctica ice free. The ice-cap in this region is now about a mile thick.
We have no idea how the data on this map can be reconciled with the supposed state of geographical knowledge in 1513.
Harold Z. Olhmeyer Lt. Colonel, USAF Commander 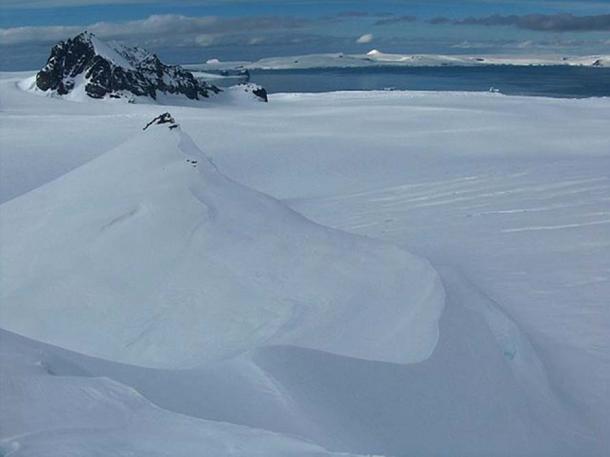 The letter from Ohlmeyer confirmed Dr. Charles Hapgood’s theory that the Piri Reis map was probably copied from a map made in ancient times.

Dr. Charles Hapgood wrote in Maps of the Ancient Sea Kings that he was sure that although the Piri Reis Map contained latitudes and longitudes plotted out at right angles in a traditional plane geometry, it had to have been based on an earlier map.

Hapgood was sure the map was ancient in origin because the Piri Reis map’s creator used spheroid trigonometry which was thought to have been invented in the 18th Century, even though the Piri Reis map has been dated to 1513. 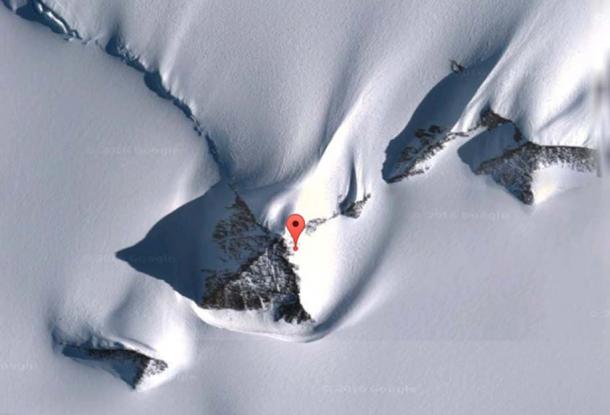 No matter what the origin of the snow pyramids may be, the discovery of these mysterious features will increase speculation on the possible human habitation of Antarctica in recent history.

By Clyde Winters / Cover Image: One of the so-called pyramids of Antartica. Source: VAN ALEXIS MORALES GONZALEZ/ Google Maps / This article was originally published on Ancient Origins and has been republished with permission.