The United States was caught interfering and rigging elections in Russia twenty years ago – a fact the mainstream media seems to have conveniently forgotten.

As the U.S. political establishment and corporate media continue to perpetrate the lie that Russian hackers interfered with this years presidential election – the media are refusing to remind the public how the American government gleefully boasted about doing the very same thing in Russia in 1996.

Twenty years ago, TIME Magazine exclusively reported on the feats of American political consultants who’d managed — much to the joy of the United States government — to ensure Boris Yeltsin won re-election to the Russian presidency.

While the U.S. decries “fake news” and dismisses the successes of alternative media’s reporting on corruption in the Democrat Party by collectively deeming it “Russian propaganda,” it would seem the entire country has forgotten American exploits in Russia in 1996.

In fact, these American advisors literally meddled in the Russian election that year — and as TIME, itself, points out, changed the course of the country’s politics forever. 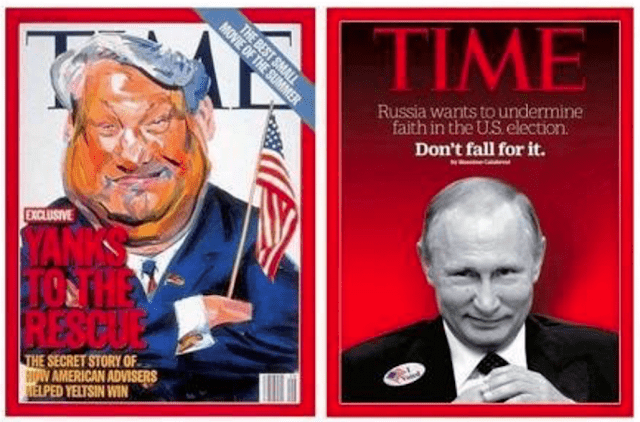 20 years ago, TIME praised America’s propaganda campaign to elect Yeltsin.
Today, they have appeared to change their tone.

“The outcome was by no means inevitable,” TIME’s Michael Kramer penned on July 15, 1996.

“Last winter Yeltsin’s approval ratings were in the single digits. There are many reasons for his change in fortune, but a crucial one has remained a secret. For four months, a group of American political consultants clandestinely participated in guiding Yeltsin’s campaign. Here is the inside story of how these advisers helped Yeltsin achieve the victory that will keep reform in Russia alive.”

Because of increasing authoritarianism and corrupt economic policies, the Russian populace had grown weary of Yeltsin and looked to vote in a more traditional communist leader.

But the U.S. sought to maintain the course of reform in Russia, because, as Kramer noted in TIME, Yeltsin “is arguably the best hope Russia has for moving toward pluralism and an open economy.”

Thus, Felix Braynin, a close friend to one of Yeltsin’s aides, helped hatch a plan to sway the election in the president’s favor — one that involved specialized polling, negative ad campaigns, propaganda, and other tools typical of an American election.

But the plan had to remain covert — for obvious reasons.

“Secrecy was paramount,” Braynin told TIME, saying he had been told to “find some Americans” to put the plan into action.

“Everyone realized that if the Communists knew about this before the election, they would attack Yeltsin as an American tool. We badly needed the team, but having them was a big risk.”

“To ‘find some Americans,’ Braynin worked through Fred Lowell, a San Francisco lawyer with close ties to California’s Republican Party. On Feb. 14, Lowell called Joe Shumate, a G.O.P. expert in political data analysis who had served as deputy chief of staff to California Governor Pete Wilson.

“Since Wilson’s drive for the 1996 Republican presidential nomination had ended almost before it began, Lowell thought Shumate and George Gorton, Wilson’s longtime top strategist, might be available to help Yeltsin. They were — and they immediately enlisted Richard Dresner, a New York-based consultant who had worked with them on many of Wilson’s campaigns.”

Dresner, it’s imperative and timely to note, had strong ties to the Clintons — a detail of critical import given the Democrats current hysteria over alleged Russian meddling in the U.S. election. TIME reported:

“Dresner had another connection that would prove useful later on. In the late 1970s and early ’80s, he had joined with Dick Morris to help Bill Clinton get elected Governor of Arkansas.

“As Clinton’s current political guru, Morris became the middleman on those few occasions when the Americans sought the Administration’s help in Yeltsin’s re-election drive.

“So while Clinton was uninvolved with Yeltsin’s recruitment of the American advisers, the Administration knew of their existence — and although Dresner denies dealing with Morris, three other sources have told Time that on at least two occasions the team’s contacts with Morris were ‘helpful.’”

It would be difficult to find a more appalling example of ‘it’s only wrong when it doesn’t benefit us’ hypocrisy.

In fact, these American advisors — although watched closely by the Russian intelligence community — carried out their clandestine mission to ensure Yeltsin’s re-election without much discretion.

“The Americans carried multiple-entry visas identifying them as working for the ‘Administration of the President of the Russian Federation,’ a bit of obviousness that constantly threatened to undermine all the supposed secrecy surrounding their real work,” Kramer wrote.

Shumate, Braynin, Dresner, and the others understood the breadth of manipulation necessary to sway Russian voters who were dead set against another term under Yeltsin — just before the team got to work, just 6 percent of Russians saw the president in a favorable light, and even fewer trusted his competency as a leader.

“Stalin had higher positives and lower negatives than Yeltsin,” Dresner told TIME. “We actually tested the two in polls and focus groups. More than 60% of the electorate believed Yeltsin was corrupt; more than 65% believed he had wrecked the economy. We were in a deep, deep hole.”

Ultimately, the team of secretive American political insiders waged a successful information and propaganda war on the otherwise oblivious Russian population, whom they convinced Yeltsin wasn’t so bad, after all.

“We were brought in to help win,” Gorton told TIME, “and that’s what we did. The Russians are prideful and say that people like us won’t be necessary in the future because they’ve learned what to do.

“You hear that everywhere after the hired guns have done their work — and it may be true. All I know is that for every guy who thinks he can go it alone, there will always be another guy who knows he can’t.”

Make no mistake about it — without U.S. interference and meddling, Yeltsin would not have been victorious in Russia’s 1996 election.

Whether or not Russia interfered in the U.S. election twenty years later — about which no unassailable evidence has yet been presented — shouldn’t really be a matter of consternation for the same political establishment so unconcerned with election ‘rigging’ when the manipulation works in its favor.

This One Thing Helps People Live Longer Than Anything Else Previous post
Even Obama Lawyers Admit Birth Certificate Forged, 'But Eligibility’s A Separate Matter' Next post