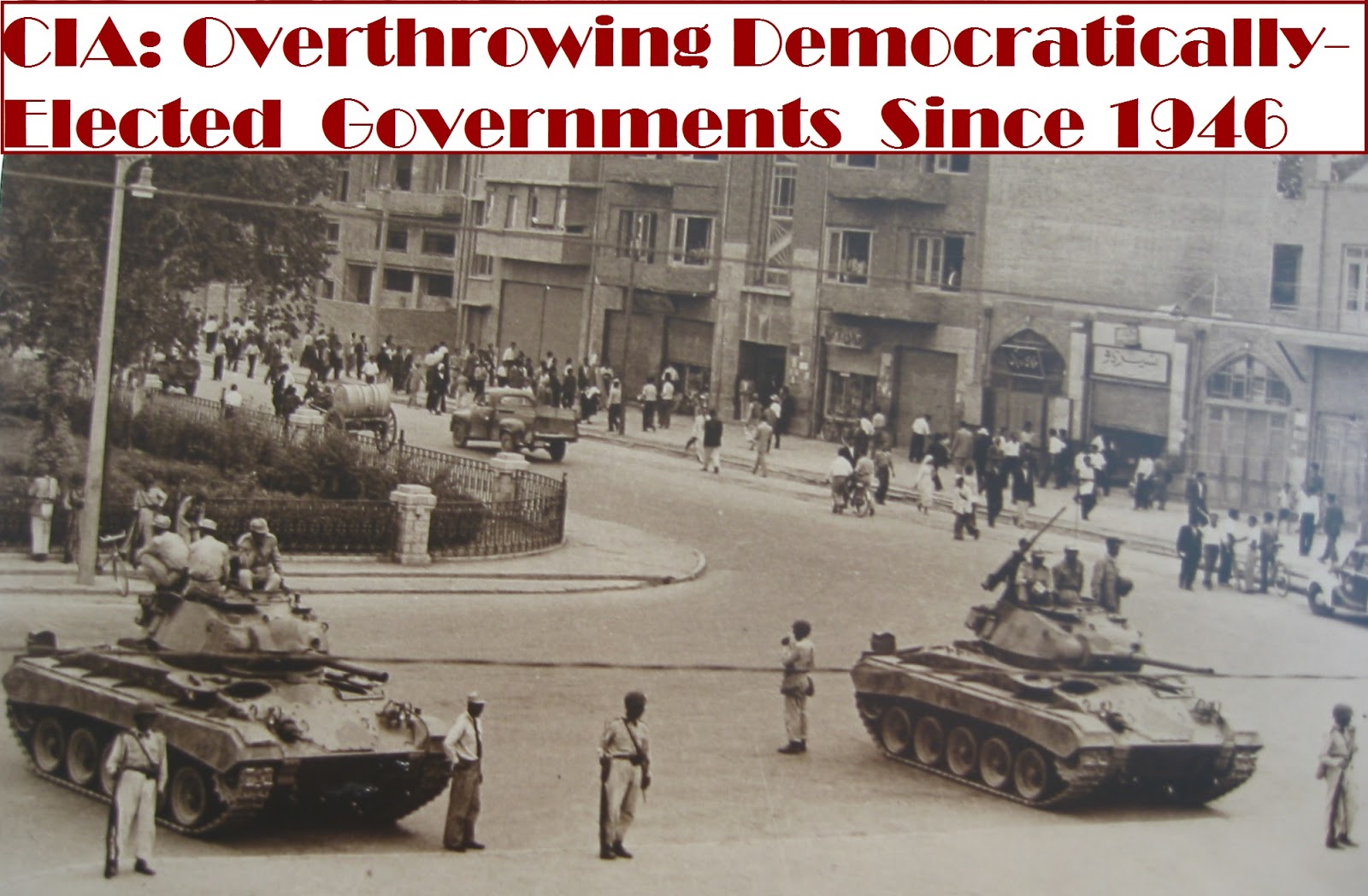 This number doesn’t include military coups and regime change efforts following the election of candidates the U.S. didn’t like, notably those in Iran, Guatemala and Chile.

The CIA has accused Russia of interfering in the 2016 presidential election (with absolutely zero evidence) by hacking into Democratic and Republican computer networks and selectively releasing emails.

But critics might point out the U.S. has done similar things.

The U.S. has a long history of attempting to influence presidential elections in other countries – it’s done so as many as 81 times between 1946 and 2000, according to a database amassed by political scientist Dov Levin of Carnegie Mellon University. 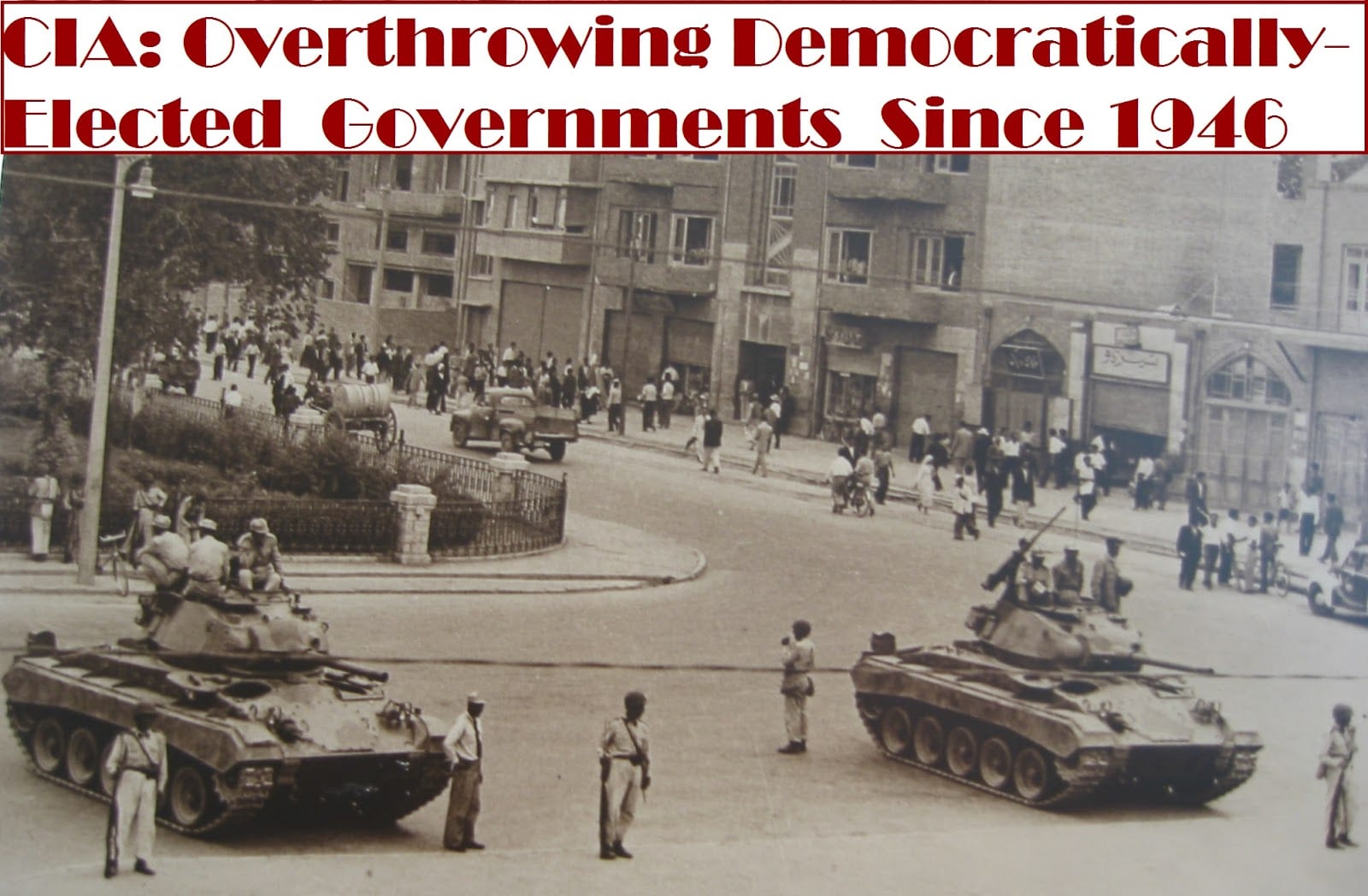 That number doesn’t include military coups and regime change efforts following the election of candidates the U.S. didn’t like, notably those in Iran, Guatemala and Chile. Nor does it include general assistance with the electoral process, such as election monitoring.

Levin defines intervention as “a costly act which is designed to determine the election results [in favor of] one of the two sides.”

These acts, carried out in secret two-thirds of the time, include funding the election campaigns of specific parties, disseminating misinformation or propaganda, training locals of only one side in various campaigning or get-out-the-vote techniques, helping one side design their campaign materials, making public pronouncements or threats in favor of or against a candidate, and providing or withdrawing foreign aid.

In 59% of these cases, the side that received assistance came to power, although Levin estimates the average effect of “partisan electoral interventions” to be only about a 3% increase in vote share.

The U.S. hasn’t been the only one trying to interfere in other countries’ elections, according to Levin’s data.

Russia attempted to sway 36 foreign elections from the end of World War II to the turn of the century – meaning that, in total, at least one of the two great powers of the 20th century intervened in about 1 of every 9 competitive, national-level executive elections in that time period.

Italy’s 1948 general election is an early example of a race where U.S. actions probably influenced the outcome.

“We threw everything, including the kitchen sink” at helping the Christian Democrats beat the Communists in Italy, said Levin, including covertly delivering “bags of money” to cover campaign expenses, sending experts to help run the campaign, subsidizing “pork” projects like land reclamation, and threatening publicly to end U.S. aid to Italy if the Communists were elected.

Levin said that U.S. intervention probably played an important role in preventing a Communist Party victory, not just in 1948, but in seven subsequent Italian elections.

Throughout the Cold War, U.S. involvement in foreign elections was mainly motivated by the goal of containing communism, said Thomas Carothers, a foreign policy expert at the Carnegie Endowment for International Peace.

“The U.S. didn’t want to see left-wing governments elected, and so it did engage fairly often in trying to influence elections in other countries,” Carothers said.

This approach carried over into the immediate post-Soviet period.

In the 1990 Nicaragua elections, the CIA leaked damaging information on alleged corruption by the Marxist Sandinistas to German newspapers, according to Levin.

The opposition used those reports against the Sandinista candidate, Daniel Ortega. He lost to opposition candidate Violeta Chamorro.

In Czechoslovakia that same year, the U.S. provided training and campaign funding to Vaclav Havel’s party and its Slovak affiliate as they planned for the country’s first democratic election after its transition away from communism.

“The thinking was that we wanted to make sure communism was dead and buried,” said Levin.

Even after that, the U.S. continued trying to influence elections in its favor.

In Haiti after the 1986 overthrow of dictator and U.S. ally Jean-Claude “Baby Doc” Duvalier, the CIA sought to support particular candidates and undermine Jean-Bertrande Aristide, a Roman Catholic priest and proponent of liberation theology.

The New York Times reported in the 1990s that the CIA had on its payroll members of the military junta that would ultimately unseat Aristide after he was democratically elected in a landslide over Marc Bazin, a former World Bank official and finance minister favored by the U.S.

The U.S. also attempted to sway Russian elections. In 1996, with the presidency of Boris Yeltsin and the Russian economy flailing, President Clinton endorsed a $10.2-billion loan from the International Monetary Fund linked to privatization, trade liberalization and other measures that would move Russia toward a capitalist economy.

Yeltsin used the loan to bolster his popular support, telling voters that only he had the reformist credentials to secure such loans, according to media reports at the time.

He used the money, in part, for social spending before the election, including payment of back wages and pensions.

In the Middle East, the U.S. has aimed to bolster candidates who could further the Israeli-Palestinian peace process.

In 1996, seeking to fulfill the legacy of assassinated Israeli Prime Minister Yitzhak Rabin and the peace accords the U.S. brokered, Clinton openly supported Shimon Peres, convening a peace summit in the Egyptian resort of Sharm el Sheik to boost his popular support and inviting him to a meeting at the White House a month before the election.

“We were persuaded that if [Likud candidate Benjamin] Netanyahu were elected, the peace process would be closed for the season,” said Aaron David Miller, who worked at the State Department at the time.

In 1999, in a more subtle effort to sway the election, top Clinton strategists, including James Carville, were sent to advise Labor candidate Ehud Barak in the election against Netanyahu.

In Yugoslavia, the U.S. and NATO had long sought to cut off Serbian nationalist and Yugoslav leader Slobodan Milosevic from the international system through economic sanctions and military action.

In 2000, the U.S. spent millions of dollars in aid for political parties, campaign costs and independent media. Funding and broadcast equipment provided to the media arms of the opposition were a decisive factor in electing opposition candidate Vojislav Kostunica as Yugoslav president, according to Levin.

“If it wouldn’t have been for overt intervention… Milosevic would have been very likely to have won another term,” he said.