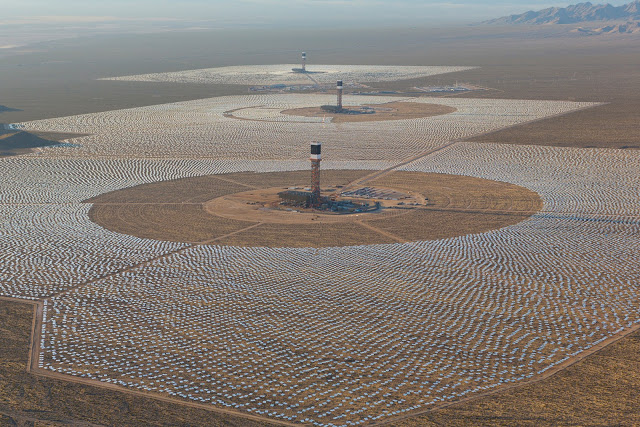 Elon Musk: ‘We Can Power USA by Covering Small Corner of Utah With Solar Panels’

During an interview Tuesday at the American Geophysical Union’s fall meeting in San Francisco, the 44-year-old CEO of Tesla Motors and SpaceX said that the U.S. could meet its electricity needs just by covering a small corner of Utah or Nevada with solar panels.

Awesome talk on the future of solar power by @elonmusk #AGU15 #gpsSTEM pic.twitter.com/obX8f6RVJg

His remark was captured in this tweet from Nature News reporter Lauren Morello, who was at the event:

Musk: “You could take a corner of Utah and Nevada and power the entire United States with solar power.” #AGU15

Musk made a similar statement during his speech at the Sorbonne University in Paris on Dec. 2.

“Let’s say if the only thing we had was solar energy — if that was the only power source — if you just took a small section of Spain you could power all of Europe,” he said.

“It’s a very small amount of area that’s actually needed to generate the electricity we need to power civilization. Or in the case of the U.S., like a little corner of Nevada or Utah would power the United States.“ 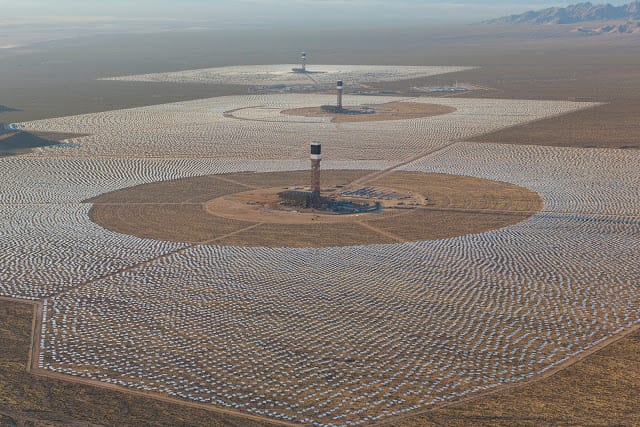 While Musk’s statement might sound a little too good to be true, as Tech Insider reporter Rebecca Harrington noted, we already have the technology to do it.

More power from the sun hits the Earth in a single hour than humanity uses in an entire year, yet solar only provided 0.39 percent of the energy used in the U.S. last year.

This is why Musk thinks that solar will become the biggest energy source by 2031, as he told Tim Urban from Wait But Why.

If solar is 20 percent efficient at turning solar energy into power, as it has been in lab tests, we’d only need to cover a land area about the size of Spain to power the entire Earth renewably in 2030.

Indeed, photovoltaic technology is growing in leaps and bounds. In October, renowned solar installer SolarCity (where Musk sits as chairman) unveiled a solar panel that can achieve a peak efficiency of 22.04 percent, and that’s just for residential rooftops.

On an industrial scale, the world’s most efficient solar cell has about double the efficiency of SolarCity’s new panels at 44.7 percent.

The Land Art Generator Initiative also crunched the numbers and determined that the surface area required to power the whole world with solar would fit into 191,817 square miles of solar panels, or roughly the area of Spain.

“678 quadrillion Btu (the US Energy Information Administration’s estimation of global energy consumption by 2030) = 198,721,800,000,000 kilowatt-hours (simple conversion) divided by 400 kilowatt-hours of solar energy production per square meter of land (based on 20 percent efficiency, 70 percent sunshine days per year and the fact that 1,000 watts of solar energy strikes each square meter of land on Earth) = 496,805 square kilometers of solar panels (191,817 square miles).”

Let’s remember that this calculation is just for solar power alone. This doesn’t even factor in all the other sources of renewable energy such as wind, geothermal, biomass or hydroelectric power.

Watch Musk’s speech from Paris about clean energy future in the video below. In the clip, which starts at 29:41, Musk answers an audience member’s question about the option of “sustainable” nuclear energy, but adds that he’s a bigger proponent of the “big fusion power plant in the sky called the sun.”


Here’s the full text of his speech in Paris:

I actually think that nuclear fission, if it’s in location that is not subject to natural disasters like in the case of France, there’s a very high percentage of nuclear, I think that’s actually a good thing.

Obviously, you don’t want to have nuclear fission power plants in places that are subject to natural disasters [30:00] because that obviously can go wrong. I think fission is a good approach.

Fusion is also interesting and it’s exciting to see what’s happening with ITER Project, which is a fusion plant that’s being built in France. I do think fusion is a feasible technology.

I think we can definitely make fusion work, but it is a far off technology. So to make fusion at the power plant level work is probably, I don’t know, 30 years away and a lot of effort.

That’s why at least for now and I think maybe even in the long-term, I’m a proponent of using the big fusion power plant in the sky called the sun. The sun is a giant fusion explosion and it shows up every day.

If we have photovoltaics, solar panels, we can capture that fusion energy. It also needs to be stored in a battery so we can use it at night. Then we want to have high power lines to transfer solar energy from one place to another.

Let’s say if the only thing we had was solar energy — if that was the only power source — if you just took a small section of Spain you could power all of Europe.

It’s a very small amount of area that’s actually needed to generate the electricity we need to power civilization. Or in the case of the U.S., like a little corner of Nevada or Utah would power the United States.

Police State USA: 'Walking Your Children Home from School' and 'Driving While Under the Influence of Caffeine' Previous post
Energetic Osmosis: 5th Through 8th Dimensions Next post