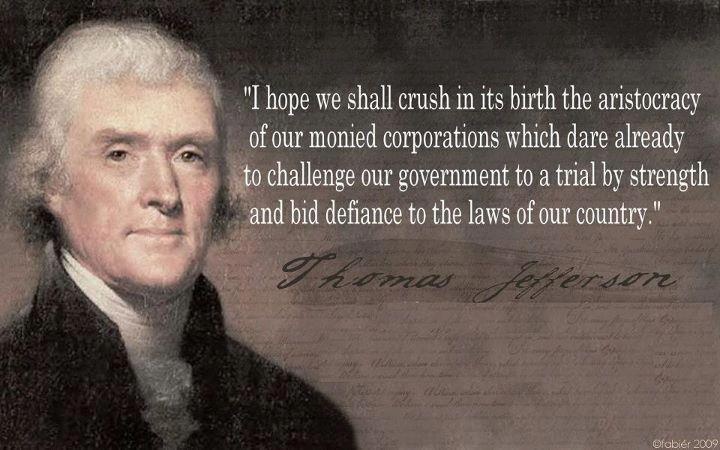 Commerce is not a dirty word, nor is the creation of wealth when it is achieved within a free market economy. The problem is that the remnant of a free market existed only in an age before the mercantile interests were able to redefine the character of business transactions.

Today, few question the nature of the corporation. Even small business ventures migrate towards the organizational structure of a corporate entity.

However, an in-depth analysis of the entrepreneurial enterprises indicates that America’s Shrinking Corporate Sector is in retreat.

“Recently released IRS data shows that there were 1.6 million C corporations in 2011. This is the lowest number of traditional corporations since 1974 and 1 million fewer than there were at the peak in 1986.”

But before you shed a tear, review A Short History Of Corporations. 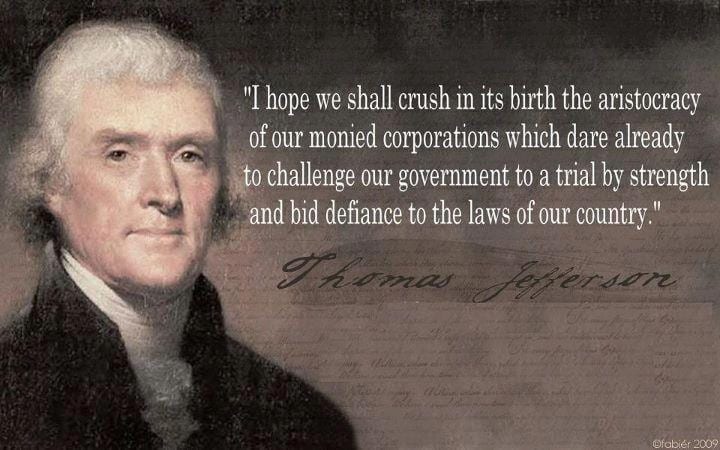 “What is a corporation? Ambrose Bierce’s Devil’s Dictionary defines it as ‘an ingenious device for obtaining profit without individual responsibility’. It is a legal construct, a charter granted by the state to a group of investors to gather private funds for a specific purpose.

“Originally, charters were granted in the service of a public purpose, and could be revoked if this were not fulfilled. The relationship between state and corporation is a complex one.

“Over the past 400 years corporations have conquered territory and brought in resources for the state, breaking laws put in place to constrain them and gaining in power and privilege. History shows a repetitive cycle of corporations over-reaching, causing such social turmoil that the state is forced to reign them back in through regulation.”

Now it is popular to condemn corporate greed and excess, but many make the fundamental mistake of accusing business endeavors as part of that intemperance.

If greed was really good, as the fictional tycoon of Wall Street argued in Oliver Stone’s movie, just how did the robber barons build their empires?

Contrast the era of the Rockefeller’s, Carnegie’s and Vanderbilt’s with the way Our Hidden History of Corporations in the United States, started out.

Citizens governed corporations by detailing operating conditions not just in charters but also in state constitutions and state laws. Incorporated businesses were prohibited from taking any action that legislators did not specifically allow.

States also limited corporate charters to a set number of years. Unless a legislature renewed an expiring charter, the corporation was dissolved and its assets were divided among shareholders.

Citizen authority clauses limited capitalization, debts, land holdings, and sometimes, even profits. They required a company’s accounting books to be turned over to a legislature upon request.

The power of large shareholders was limited by scaled voting, so that large and small investors had equal voting rights. Interlocking directorates were outlawed. Shareholders had the right to remove directors at will.”

How did the concept of granting a limited corporate charter morph into the huge monopolies that a financial magnate like J.P. Morgan was able to control?

Well, the answer points to the basic formula that is at the root of government itself. Human nature does not change, but the legal system does.

Lawyers and judges are the central operatives that change legal concepts and expand the definitions of acceptable conduct. They derive their financial interests from the corporate boards who pay their fees or provide their campaign contributions.

Political legislatives become dependent upon the money class to feed their appetites and pockets. The end results is that the tight restrains upon corporate constructs are gone with the wind just as clearly as the sovereignty of individual states were quashed in the conflict that centralized more power under the Federal Government hegemony.

For an examination on the most tortured perversion and betrayal of the American Revolution, the Totalitarian Collectivism — Part 8 — CORPORATIONS and LAW segment, cites the most irresponsible legal precedent.

“The 1886 case, Santa Clara County v. Southern Pacific Railroad Company, is often cited that the U.S. Supreme Court ruled that corporations are “persons” having the same rights as human beings based on the 14th Amendment.”

The Supreme Court has a long legacy of absurd and tyrannical usurpation of the most basic precepts of the Bill of Rights.

How can a corporation be elevated to the same level as a living breathing citizen when crowning magistrates strip the basic human rights from the unborn?

If a conceived being with a created soul can be de-legitimated by a capricious and arrogant court, while fabricated and artificial corporation entities can be endowed with personhood status, how can this be a lawful society?

Explore the significance of this irrational legal injustice. Corporate Personhood explained in simple terms for the rest of us makes some valuable points.

“The effects of this change in relationships range from loss of liberty and income for citizens to the destruction and poisoning of the earth and the corruption of the U.S. governments (including state and local governments).

“Corporate personhood allows the wealthiest citizens to use corporations to control the government and use it as an intermediary to impose their will upon the people. It is this basic about-face from democracy that should most concern us.

“But because of our corrupted legal system, corporate media, and corrupted elected officials, social activists usually focus their efforts on the bad, even horrible, results of corporate control of government and society.

“Reformers run around trying to get bureaucrats to enforce the minimalist regulations that have been enacted into law, rather than finding a way to prevent the corporate lawyers and lobbyists from writing the laws.”

Essentially, the economy is dominated by money interests, who provide the capital to selective and favored corporations in order that monopolies can stamp out competition and dominate future technology.

Upstarts that develop innovation and cutting edge ventures are not allowed to grow into major players. They are either bought out or are left to starve for lack of working capital.

Government backed companies are nurtured and expanded with public contracts, which are groomed to become takeover targets for the grand oligopoly corporatists. Domination of economic activity has gone international under the globalism umbrella of transnational corporatism.

In the face of such 21st century expansionism of the corporate model, even Alexander Hamilton would be shocked with this application of corporate personhood to trade jurisprudence.

Since the Citizens United decision that favored corporate political speech, the Hobby Lobby and the Supreme Court essay bring into question the First Amendment religious protections of a corporation.

Still, in this example the endowment of personhood standing defies the original composition for a corporate entity. Are there no limits for excuses used to revere the corporation?

The United States is a Private Corporation Not a Public Government helps to explain a provocative viewpoint that is never taught in business schools.

“Despite the seemingly altruistic intentions outlined in the US Constitution, the United States is actually now a series of inter-connecting legal entities structured as a corporation, granting dubious powers to the Federal government and other ‘governing entities.’

“Beginning with the Organic Act of 1871, the nation has since been stripped of any legitimate sovereignty, and the citizens herein are now traded as stocks in bondage to a corporate machine.”

Strange as it seems to many, this interpretation clarifies better than any court decision. Allowing the courts to assign personhood to an artificial LLC that can be registered online for a fee, is a maniacal anti human affront to civilized society.

Any legal system that exempts or grants immunity from liability cannot claim to be a bona fide authority.

Exempting accountability is a license to defraud, injure and steal. The concept of the public good is absent in a world where companies change names as often as adverse publicity hits the news wires.

People need and deserve to have confidence that companies, they buy and sell to, have an actual person who stands legally liable for any evidential claim.

This standard is easy to understand when applied to a small business. But can it be enforced upon a mega corporation?

Only stripping each derivative rendition variation of personhood from any and all corporations can restore a sense of legal justice. Now the $64,000 question, how can this benchmark be applied to the described government corporate machine?

Citizen resistance to their chattel bondage as imposed by “so called” official authorities is the first step to free the chains of serfdom. The prohibited history of the real Thomas Jefferson’s Revolution must be learned by all Americans.