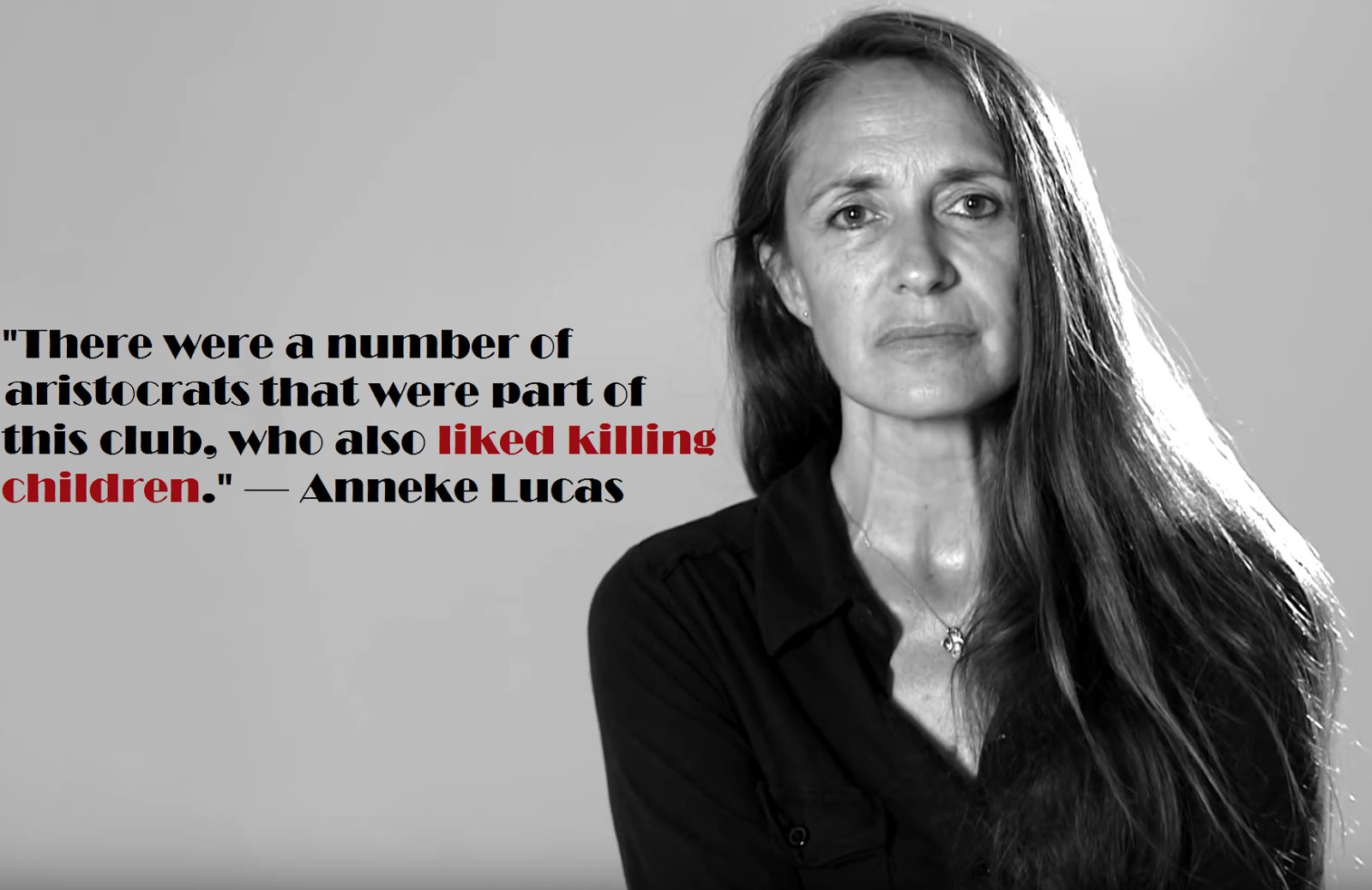 When I was a little girl in my native Belgium, I was put to work as a sex slave.

My mother sold me, and drove me wherever, whenever she got the call. The boss of this pedophile network was a Belgian cabinet minister.

The clients were members of the elite. I recognized people from television. Their faces were familiar to the masses, while I was confronted with the dark side of their power addiction — the side no one would believe existed.

I came across VIP’s, European heads of state, and even a member of a royal family. 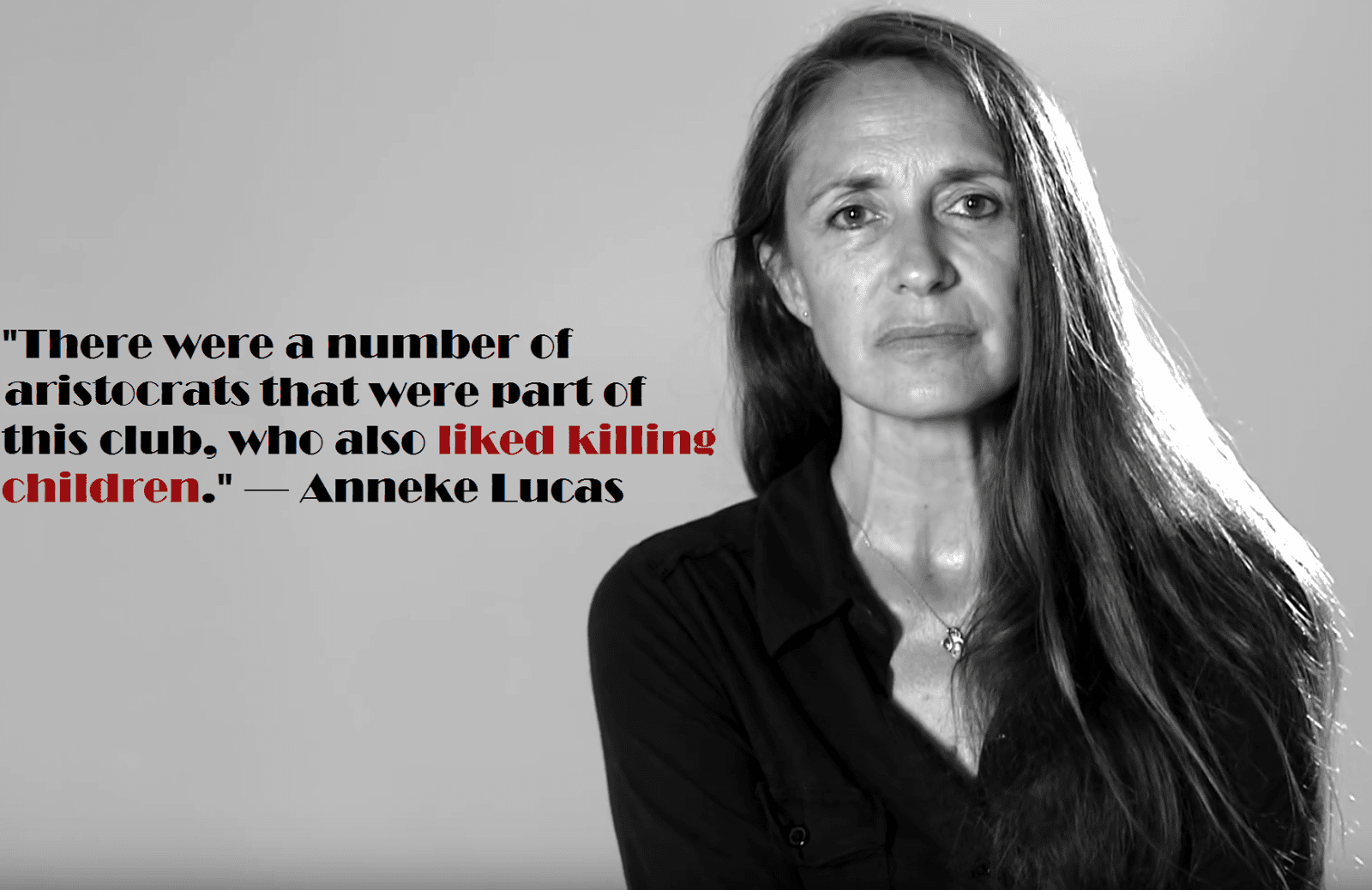 Afterwards, left lying there like a broken object, I felt so humiliated, I had to do something to save my soul, or else — and this I knew for certain — I would have withered and died.

I raised myself up, and stood looking at the bizarre crowd of aristocrats dressed up as hippies, swaying to the music in various levels of sexual interaction, busily availing themselves of little pills and pre-rolled joints passed around on silver trays by sober waiters.

I trembled in fear, but my body straightened and stilled itself like a bow in suspense before the shot, and I heard my voice as though it were not my own, chiding the adults, telling them that this was wrong – that I was going to tell on them, and that they would all go to jail.

Trippy, spacey music was oozing through the atmosphere and most people were too high to notice me. One man, wearing a business suit, caught my eye.

He looked scared, but he held my gaze for a brief moment, and seemed to feel for me. Then he was gone. I never saw him again in the network, but years later I did spot him on TV. He became a prominent Belgian politician.

I was quietly led away and taken to a cellar. I was certain that I was going to be killed, but instead I was shown the fresh body of a young murder victim. I was to remain silent.

During the week, I went to school. I was a shy girl, with few friends. I remember, once, in the second grade, becoming aware of an energetic shift in the room, to realize all eyes were on me.

The teacher had been calling on me, and I had been too spaced out to hear. She wondered out loud if I knew the answer to the question she had asked, and I sat in embarrassing silence while the class laughed.

I was a nonentity at school, and at home no one cared for me. I received more attention in the network. It felt good to be viewed as the most perfectly beautiful, sensual object by powerful men with high standards in taste.

This was the only positive in my life, and I clung to it as my only raft to keep from drowning in a sea of shame and self-loathing.

After four years of surviving the network, when I was 10, a new guest brought along his 20-year-old son: tall, dashing, blond, and blue-eyed. He boldly advanced toward me.

This interaction started the most intense year of my life, in which I would feel more than ever loved, seen, and understood, and would be more than ever abused, all by that same young man.

A year later, when he was through with me, I was of no use to the network anymore, and was to be killed. When my torture began, he stood watching, laughing.

This was the third time that my entire being became filled with an otherworldly force. Fierce pride straightened my body. A burning cigarette was put out on my forearm. My energetic body latched onto his in pure defiance.

The thought “I don’t need you!” had become me, and all I saw was the energy behind the troubled ocean of blue in his eyes, and the love in spite of all the pain he had passed on to me.

I was led away to a small room, and strapped onto a butcher’s block. The man who tortured me was one of the defendants in the notorious Dutroux case, which, when it broke the news in 1996, was believed it would blow up the Belgian pedophile network.

Same story, all around the world!

But instead, eight years later, only Marc Dutroux received a life sentence. I should have died that night in 1974 on that butcher’s block, but my life was saved at the last minute.

While I had been tortured, the young man had been negotiating with the politician in charge of the network.

They made a deal: he would work for the politician, extend his shady services in exchange for my life. This one good deed eventually cost him his own life. In this milieu, any shred of humanity is a deadly weakness.

My life was spared, and I was told to remain silent forever. It took me 40 years before I could speak up.

In 1988, when I was 25 years old, I was walking downtown Los Angeles, near Skid Row, and got a faint, specific whiff of human feces, and was assaulted with the memory of the extreme humiliation I had suffered as a child.

My instant thought was: “If this is true, I’m going to kill myself.”

I was too identified with the experience, and the shame was too great. I wasn’t ready, and pushed the memory back into the subconscious. It would take several more years, many more hours of therapy, to finally share this memory with one safe person.

I share this experience publicly here for the first time, having finally reached a place in my healing where I have access once again to the strength that came through me in those moments of clarity in the network.

I also believe that the world is more than ever ready to confront its darkness. We have to, if we are to survive as a species.

All survivors of incest, sexual abuse, and sex trafficking have my strength. Though I suffer from PTSD, and, for example, I still become nauseous whenever I hear a certain kind of airy, trippy music, I’ve become so mindful of triggers that they don’t control my everyday existence.

It takes so much energy to survive not only the physical violence, but to endure the psychic drain of abuse — to carry the shame.

Just surviving daily life while trying to heal from child sexual abuse requires a thousand times the strength it would require for someone without awareness to pursue a successful career. And society still values the career person over the survivor.

Power addicts, world leaders, and corrupt politicians who abuse children are themselves like children who never grew up, driven to power to avoid ever feeling the humiliation of child abuse again, unconsciously seeking revenge from a place of hurt by recycling the abuse. They lack the courage to heal.

Those of us who have suffered sexual abuse, incest or sex trafficking need to learn to harness our survival strength on our own behalf, so we can heal our damaged ego, and channel that strength to lead the way towards a future in which former victims conquer by love, understanding and compassion for all.

Written by Anneke Lucas
Geoengineering Warfare is Linked to Agenda 21 Previous post
The Obama Legacy: Top 10 Lowlights of His Presidency Next post