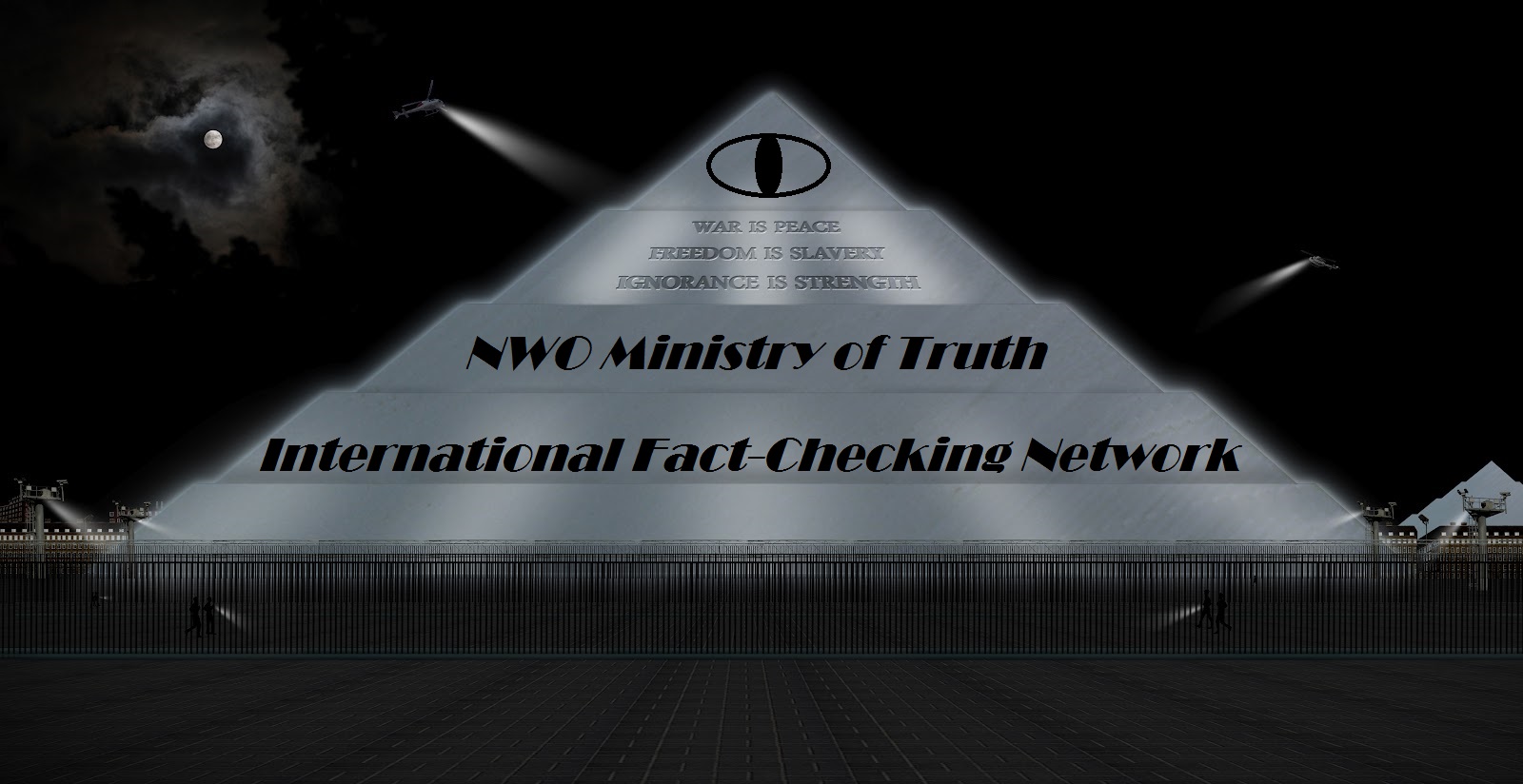 The International Fact-Checking Network (IFCN) is an organization that until recently you may have never heard of, but is now poised to make a powerful influence on your life.

Why? The multi-billion dollar corporation and CIA data mining operation Facebook has decided to enlist the help of the International Fact-Checking Network in its quest to eliminate “fake news” (i.e. enact censorship through the backdoor).

Those aware of the current psychological operations will know that the entire “Russian propaganda” and “fake news” themes are stealthy ways for the establishment to stifle dissent.

They are whipping the public up into a frenzy about purported Russian hacking and Russian interference without a shred of credible evidence, all the while scaring people into thinking they need some “independent” arbiter (outside of themselves) to decipher and decide what is real and what is fake. 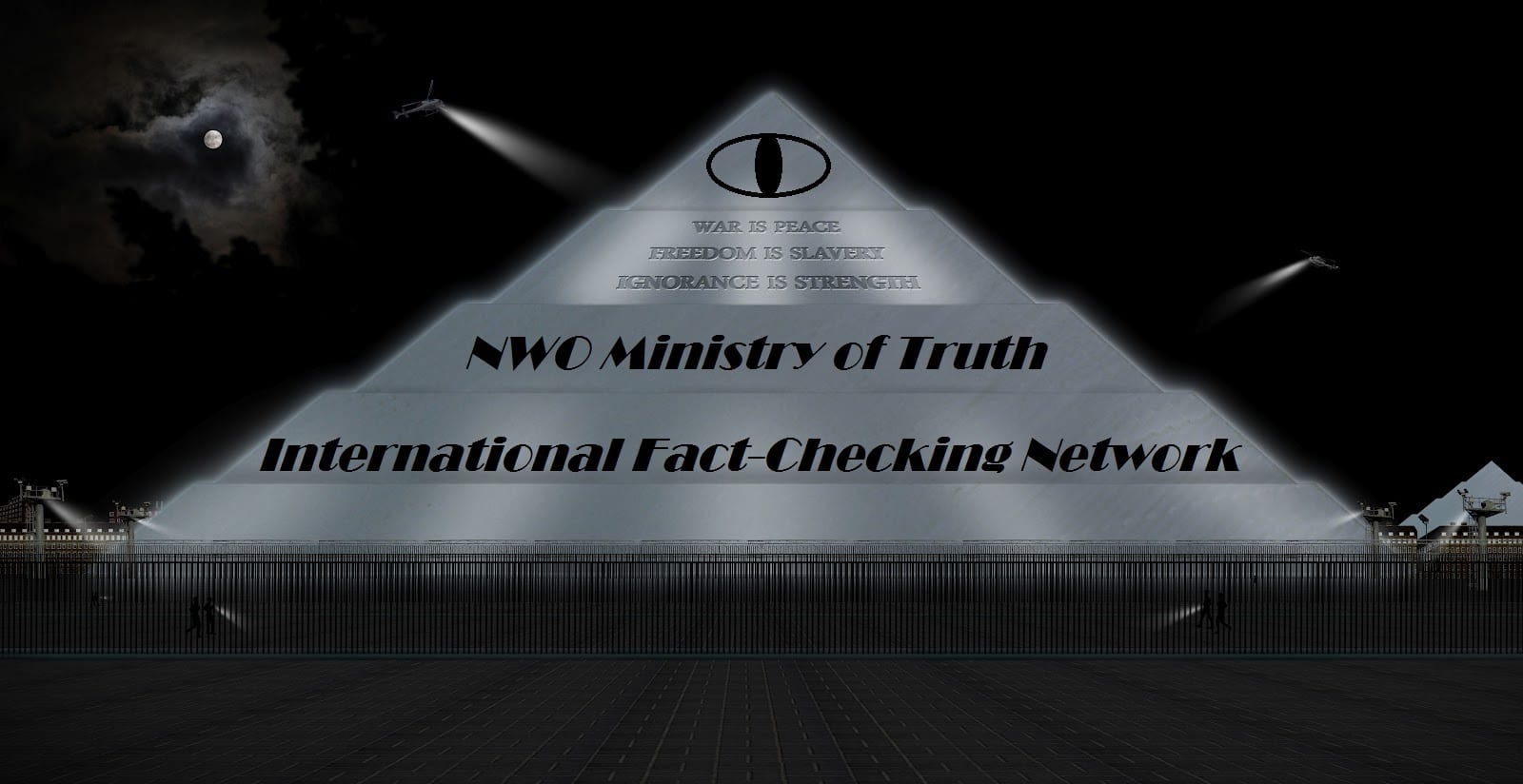 It’s the ultimate perception grab; they want you to hand over your power and let your perception be dictated by them.

Now, Facebook has announced it will be using the International Fact-Checking Network and other 3rd party fact-checking organizations to weed out all the fake news.

Is the International Fact-Checking Network poised to become some kind of Ministry of Truth as Orwell wrote about? Who funds the organization and how does its check its facts?

The IFCN openly states that it is hosted by the Poynter Institute for Media Studies, and that:

Our readers will probably recognize some names here that are an integral part of the New World Order.

These include Google (driving the transhumanist agenda), Billy Boy (who has cropped up in the last 3 years to support jjabs, GMOs, Common Core and other NWO initiatives), George Soros (master manipulator behind the Ukraine coup of 2014, Black Lives Matter and other movements to disrupt the law and socially engineer society) and Pierre Omidyar (current owner of PayPal connected to the Military Intelligence complex via Booz Allen Hamilton).

Soros owns and funds a slew of treacherous NGOs (Non-Governmental Organizations) such as the National Endowment for Democracy and Open Society Foundations.

The ICFN’s Code of 5 Principles

The International Fact-Checking Network has come up with a code of 5 principles by which it operates.

Facebook said it will only work with 3rd party fact-checkers that are signatories to this code of principles, and that once one of these organizations decides that a particular story is fake, it will be flagged as disputed and “there will be a link to the corresponding article explaining why. Stories that have been disputed may also appear lower in News Feed.”

Here are the 5 principles:

1. A COMMITMENT TO NONPARTISANSHIP AND FAIRNESS

We fact-check claims using the same standard for every fact check. We do not concentrate our fact-checking on any one side.

We follow the same process for every fact check and let the evidence dictate our conclusions. We do not advocate or take policy positions on the issues we fact-check.

2. A COMMITMENT TO TRANSPARENCY OF SOURCES

We want our readers to be able to verify our findings themselves. We provide all sources in enough detail that readers can replicate our work, except in cases where a source’s personal security could be compromised. In such cases, we provide as much detail as possible.

3. A COMMITMENT TO TRANSPARENCY OF FUNDING & ORGANIZATION

We are transparent about our funding sources. If we accept funding from other organizations, we ensure that funders have no influence over the conclusions we reach in our reports.

4. A COMMITMENT TO TRANSPARENCY OF METHODOLOGY

We explain the methodology we use to select, research, write, edit, publish and correct our fact checks. We encourage readers to send us claims to fact-check and are transparent on why and how we fact-check.

5. A COMMITMENT TO OPEN AND HONEST CORRECTIONS

Facebook has made it a prerequisite to be a signatory on this code of principles to become a Facebook fact-checker.

However, on the very same page below the code of principles, there is a list of organizations that have already joined.

They include ABC News and The Washington Post Fact Checker – 2 MSM outlets.

The Washington Post was the paper that started all the nonsense about Russian propaganda with its own fake news report based on the dodgy research of PropOrNot (a report it later retracted)!

Politifact and Snopes are also on the list, and although they are not MSM, their reputations are already quite tarnished due to their past shoddy fact-checking. 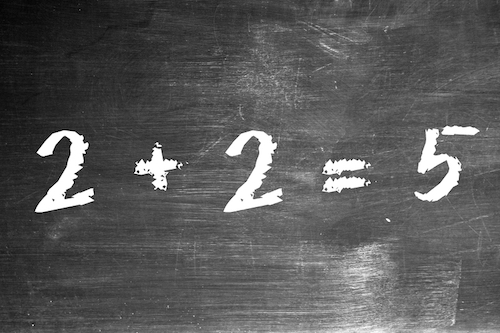 Will the International Fact-Checking Network become something akin to a worldwide
Ministry of Truth as predicted by George Orwell in 1984?

How Can Fact-Checkers, No Matter How Well Intentioned, Ever Be the Arbiters of Truth?

Does the group of NWO funders behind Poynter give you the impression that the International Fact-Checking Network will be independent?

And moreover, even if they were granted some kind of “editorial independence” by their funders, would they have the desire and ability to become arbiters of truth on massive and complex subjects like GMOs, the New World Order, geoengineering, worldwide pedophilia rings, conspiracy-facts and Satanism?

Since many current topics lead back to fundamental issues like these, how are they possibly going to shed any light on these vast topics?

How can anyone expect them to be experts in these fields? How are they going to be able to do anything other than parrot the standard narrative on these topics, which they will get from some form of the MSM or “mainstream science” — the very same sources which advocate toxic-laden jjabs and synthetic pharmaceutical drugs as good for your health?

How are they are possibly going to have the scope, breadth and depth of vision and perception that comes from studying these topics in depth for decades as many in the Alternative Media have?

It’s Not About Left vs. Right — It’s About Free Speech vs. Censorship

Some commentators and journalists are making this issue into a left vs. right affair, claiming that the fact-checkers are left, liberal or progressive in their political leanings.

While it’s true that Soros funds leftist movements, this whole issue is not really about left vs. right. It’s about free speech vs. censorship.

The fact-checkers will of course have all sorts of biases in their viewpoints, which is why all opinions need to be fully aired so the truth can rise to the surface.

Imagine if everyone looked at every internet story – from the MSM and the Alternative Media alike – and asked with a critical eye: where’s your evidence and what are your sources?

There would be no need for fact-checkers, because every reader would become a fact-checker. It would also destroy government lies right from the start (“the Russians are hacking us” and “the zika virus will kill you” — or not), because they would never get a chance to take off.

The only way out of this is education. The only way people can know the truth is to read widely, inform themselves about the issues, discuss it over and over, get new perspectives, test things out in their own experience and make up their own mind.

Blocking news stories and alternative perspectives will only hamper this (but then, censorship is the whole point of this exercise).

Yes, hoax stories are annoying and clickbait headlines are irritating, but at some point, you have to trust that readers will begin to see through that crap and consciously choose which sites to read and which to shun.

If a site keeps putting out lies and clickbait, at a certain point it will gain a negative reputation and get ostracized.

Collectively, we have to grow up and not expect or call for governments and other organizations like the International Fact-Checking Network to do our fact-checking for us. We have to do it ourselves.

It is part of our spiritual journey to be able to mature to the point where we can discern truth from lies. When enough of us can do that, the world will know peace, for as Julian Assange says, if lies are used to start war, then truth can be used to start peace.

7 Signs You’re Not Living in the ‘Land of the Free’ Previous post
Cancer, Cancer Everywhere… But Not in the Presidential Suite Next post