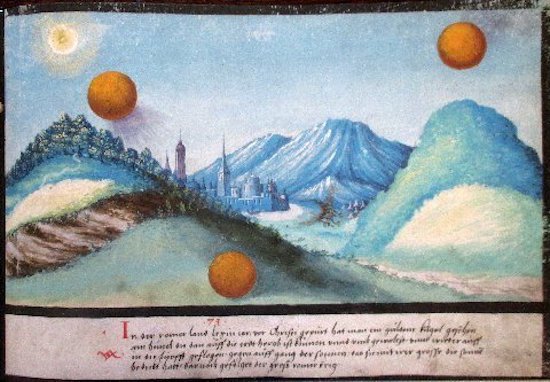 A parma was a small round shield made of iron, bronze, and other metals. According to NASA, “we do not know whether the luster of these devices (and not just their shape) was intended to be an element of the description.

Mock suns are an unlikely explanation, since in the Roman prodigy lists these were routinely described as ‘double suns’ or ‘triple suns’ (i.e. two mock suns on either side of the real one).” (source)

Another example would be the picture above, known as the “Golden orb” phenomenon seen at Spoletium, Umbria, Italy in 91 BC (from Jaques Vallee, Chris Aubeck: Wonders in the Sky). 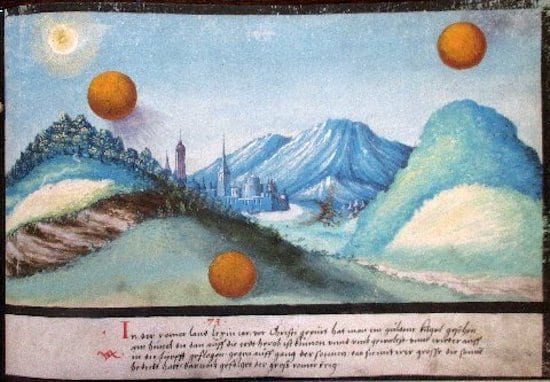 The one below is from August 7, 1566. At dawn, many citizens of Basel (Switzerland) reported seeing many spheres for several hours.

In 173 BC “at Lanuvium a spectacle of a great fleet was said to have been seen in the sky” (Liv. 42.2.4). In 104 BC, “the people of Ameria and Tuder observed objects in the sky rushing together from east and west, those from the west being routed.”

In 100 BC, “a round shield (clipeus), burning and emitting sparks, ran across the sky from west to east, at sunset.” Thus Pliny (Nat. 2.100), although Obsequens (45) called the phenomenon “a circular object, like a round shield.” (source)

The Ramayana is a Veda epic that dates back to the fourth/fifth century, B.C. (Mahabharata VIII.31.80).

In one passage, a vimana is described as a “chariot that resembles the sun, that aerial and excellent chariot going everywhere at will, resembling a bright cloud in the sky, and the king got in and the excellent chariot rose up into the higher atmosphere.” (Dolan, Richard. UFOs For the 21st Century Mind. New York: Richard Dolan Press, 2014) (source 2)(Daniken, Erich. Chariots of The Gods. New York: Berkley Books, 1970). 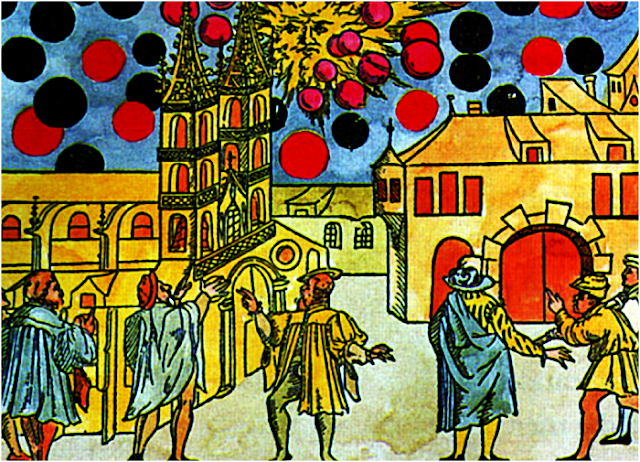 Vimanas are also described in the Mahabharata, another ancient text. In this case, measurements are given for one of the vimanas. It’s described as having twelve cubits in circumference, with four strong wheels, approximately 20 to 25 feet in circumference, about seven feet in diameter.

“They roar like off into the sky until they appear like comets.” The Mahabharata and various Sanskrit books describe at length these chariots, “powered by winged lighting…it was a ship that soared into the air, flying to both the solar and stellar regions.” (source)

This is something that’s been documented by several different cultures from around the world up to the present day. And although many of today’s sightings can be explained by modern day conventional science, a large portion, not small, remain a complete anomaly.

Below is a video of Dr. Jacques Vallée, whose latest work includes a recently published analysis of 500 UFO cases from biblical antiquity t0 1879 before the development of the modern day industry. That was published in his book Wonders of the Sky.

Vallée co-developed the very first computerized mapping of Mars for NASA. He is also noted for his work at the Stanford Research Institute (SRI), where he helped create ARPANET, a technology that became the foundation for the modern day internet.

He also supports the extraterrestrial hypothesis as one explanation for the UFO phenomenon, meaning that some of these UFOs are indeed intelligently controlled, remotely or not, by extraterrestrial beings. One of his many published papers, written in the late 90s, appeared in the Journal of Scientific Exploration.

Titled “Estimates of Optical Power Output in Six Cases Of Unexplained Aerial Objects With Defined Luminosity Characteristics,” (source)(source) it offers a comprehensive look at the oddities military pilots encounter when they are ordered to intercept one of these UFOs.

HERE is another video of him speaking on the UFO phenomenon at the Global Competitiveness Forum in 2011.

Here is a video of him giving a TEDx talk in Brussels: