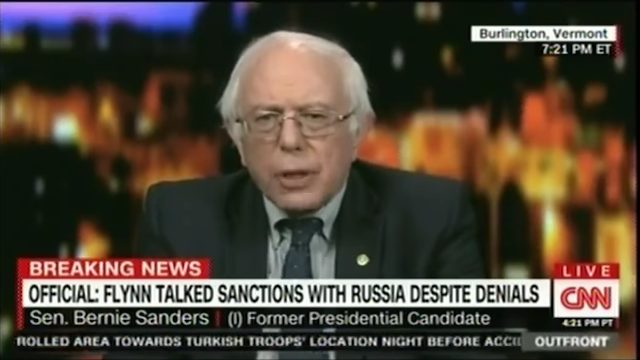 Bernie Sanders is the latest in a growing list of people to be CNN’d — that is, to have the mic mysteriously cut during an interview — when the former presidential candidate dared to barb the outlet as Fake News.

CNN anchor Erin Burnett interviewed Sanders on the incendiary contention concerning National Security Advisor General Michael Flynn’s phone call with Russia’s ambassador to the United States, and whether or not sanctions and cooperation were discussed — before President Trump took office.

After then showing Sanders a clip of Trump stating he had not heard about the Flynn controversy, Burnett asked,

“[Trump] says he knows nothing about it, hasn’t seen any of these reports. Um … is that a problem?”

“Well I don’t know,” Sanders replies. “Maybe he was watching CNN fake news. What do you think?” 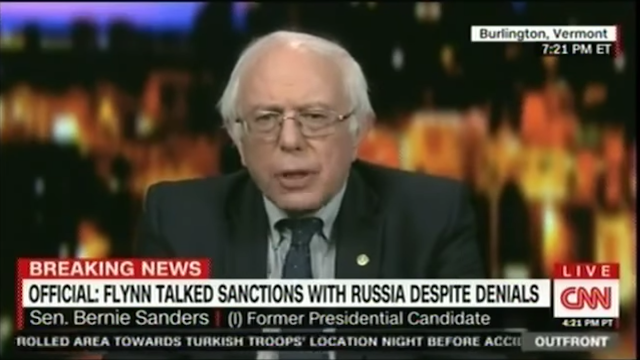 Visibly shaken Burnett looks down and fumbles with papers for a moment before Sanders clarifies, “It was a joke!”

“I, I know it was a joke,” she stammers. “I’m saying you don’t buy what he said obviously.”

But that implied question goes unanswered, and it becomes apparent Sanders’ mic has been cut, when he asks, “Erin?”

Burnett repeats herself, but at this point, the ugliness of using ‘technical difficulties’ as a weapon to silence interviewees not in direct alignment with CNN is plain to see — Sanders dared deem the vanilla media behemoth Fake News, albeit perhaps in jest.

Worse, he delivered the ill-fated joke just one day after CNN’s Chris Cuomo somehow thought it would be wise to equate the derogatory and propagandic term Fake News with a racial slur.

“‘Fake news’ is the worst thing you can call a journalist,” Cuomo asserted. “It’s like an ethnic disparagement. You know, we all have these ugly words for people and that’s the one for journalists.”

On radio, he repeated and worsened the absurd comparison, saying:

It’s safe, and quite ironic, to say CNN has issues with Fake News — perhaps due to its history of reporting falsehoods, fabrications, and questionable information. Technical difficulties seem to step in when the truth hurts.

Sanders’ mic being cut, of course, is not the first time CNN pulled the plug on a guest at a suspiciously opportune moment — and these timely technological mishaps would be downright comical did they not evince a penchant for censorship.

During election season in July, CNN cut the feed of a reporter who had the gall to criticize Hillary Clinton — reminding the savvy precisely why the network often earns the nickname, the Clinton News Network, for its loyalty to the former presidential candidate.

CNN promptly pulled the plug on Keilar in mid-sentence.

Then, in October, pro-Trump Congressman Chris Collins waded into deep waters by criticizing Hillary Clinton — but guaranteed his time on air would be limited when he added a key term: Wikileaks.

Although CNN isn’t alone in the business of pulling the plug on guests who step over the staunch but invisible line, its technical difficulties are among the worst.

The following video is a compilation of CNN and MSNBC yanking the platform out from under those expressing truths they find untenable: