One of the greatest mysteries of our time is the many alignments that link together sacred sites all over the UK and Europe called ‘ley lines’, ‘leys’, or ‘energy lines’.

The history surrounding this subject has many landmarks, beginning with Alfred Watkins in 1921. He was the first to propose that certain landscape features such as prehistoric earthworks and churches seem to fall on visible alignments.

He named them ‘leys’ due to the frequency with which the suffix ‘ley’ appeared in the many place names on the lines, such as Crossley, Endley and Longley.

His research and findings published in The Old Straight Track in 1925 concludes with the revelation that prehistoric man constructed a system of aligned sites for the purpose of travel.

In the 1960s and ‘70s, several researchers changed the perspective of the ley mystery suggesting that rather than trackways these lines, in the words of Professor Elliot Smith, were ‘a concrete expression of the divine power of life-giving energy’.

His articulate writings enlivened the debate by likening the British ley system to the dragon lines of ancient Chinese tradition. His theories changed people’s conception of the land as a living, breathing entity.

‘It was recognised that certain powerful currents, lines of magnetism, run invisible over the surface of the Earth. The task of the geomancer was to detect these currents and interpret their influence on the land over which they passed.’

The Chinese geomancers were trained in the art of astrology and the divination of the land, and were skilled in finding the most auspicious place to build shrines and temples for the emperors.

They understood the life-giving qualities of the earth currents (also known as earth serpents or dragons) and in certain places shaped their landscape to harness their energy, including spiritual harmony and aiding fertility within the land.

The emperor’s palaces and tombs were the only structures permitted on the dragon paths, thus ensuring the imperial leader power in life and death and the future success of his dynasty.

For the Chinese, the dragon or lung mei was a symbol of this divine force, containing either male (yang) or female (yin) properties.

The male current or White Tiger followed the high places such as mountaintops across the country, whilst the female current or Blue Dragon visited lakes, rivers and springs deep in the valleys.

With the aid of divining rods, a compass and a vast knowledge of the celestial influences, the Chinese geomancer detected these paths of the dragon, constructing buildings so as not to interfere or block their natural flow.

Many of the well-known leys travel only a few kilometres and often begin at landscape features such as mounds or sculptured hills. Longer leys that stretch over many kilometres are rare and if plotted on maps often suffer from inaccuracies.

The St. Michael Line, first noticed by John Michell, is the most famous long-distance ley in Britain (see Figure 1). It courses from Land’s End in Cornwall to Hopton on Sea on the Norfolk coast, marked by numerous prehistoric sites and hilltop churches dedicated to St. Michael.

Numerous churches dedicated to St. Michael and St. Mary stand along the whole length of the line, with many constructed either side of it.

This alignment of sacred centres and places of power also has a solar influence, for it is aligned to the Beltane sunrise and forms the longest east-west through-route in Britain.

Together with John Michell, many authors proposed that the Neolithic and Bronze Age peoples in Europe built their stone temples, earthworks and barrows similar to the principles of the Chinese.

They too had diviners to locate these hidden pathways, marking their route with standing stones, dolmans, stone circles, long barrows and tumuli.

As astronomers and astrologers, the Celts and their priesthood, the Druids, continued this tradition of tracing the emergence of the dragon force, manipulating and animating its fertilising power required in the land.

Michell refers to the St. Michael Line as having the ‘appearance of a “via sacra”, a sacred pathway between ritual centres which is a feature of ancient landscapes throughout the world, and is supported by records of pilgrimage routes between places on the alignment’.

During the late 1980s, Hamish Miller and Paul Broadhurst further explored the enigma of the St. Michael Line. Miller had a great gift for dowsing energy currents, a sensitivity that evolved from a near-death experience.

Together with Broadhurst’s articulate writing skills and meticulous research, they produced an account of their journey dowsing the line, starting on the coast of Cornwall near Land’s End.

However, Instead of finding a straight line, Miller detected a sinuous path of energy that weaved across the landscape visiting prehistoric sites and Christian sanctuaries either side of the straight alignment.

Miller also discovered that at certain secret places of power the line narrowed down to a point in the ground and reappeared a little further away in precisely the same manner. He realised that this unusual behaviour was the result of another line of energy crossing with it to form what Miller called a Node.

He found himself having to de-tune to follow this new line effectively for, although similar in width and strength, it had a gentler and softer nature. This they concluded was a feminine current of energy.

They soon discovered that two currents, one male and the other female, like the Chinese White Tiger and Blue Dragon, followed the ley for the whole length of its course (see Figure 2).

Miller also discovered that the currents form a Node at various prehistoric sites including Iron Age hill forts, mounds and stone circles, some located in medieval churches and others unmarked in the middle of a field.

Over the centuries, those initiated into the underground stream of esoteric knowledge were aware of those secret Nodes, regarding them as fortuitous places of yin and yang power and, like the Chinese, built their temples and churches over them.

In the course of dowsing the Michael and Mary lines of the St. Michael alignment, Miller and Broadhurst uncovered evidence that our ancestors had at one time manipulated these currents or lines of dragon force, in order to exert greater control or authority over certain places of power.

Their research was published in the book The Sun and the Serpent in 1989. 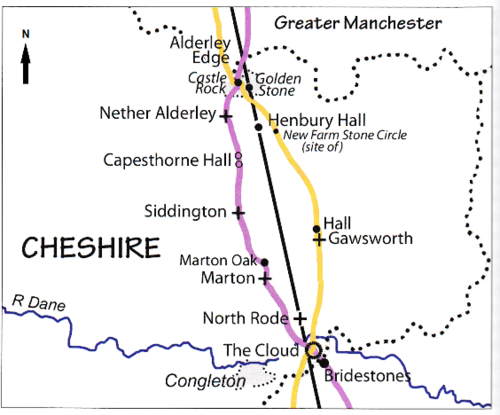 Figure 2: The three aspects of a ley line: The straight black line marks the alignment, the
purple line marks the female current of energy, and the yellow line marks the male current.
The points at which the male and female earth currents cross are called Nodes.
This image is of part of the Belinus Line (not the St. Michael Line).

Modern researchers claim that these long-distance alignments are linked to a grid or network of lines that circumnavigate the Earth (see Figure 3) and that their crossing places or Node points were utilised by man as their centres of religious practice.

Today the realm of science is drawing ever closer to realizing that metaphysics can explain some of the mysteries of the Earth, and that our planet is a living entity; this is known as the Gaia principle.

Often people make the comparison that the electromagnetic life force around the human body is similar in essence to that of the Earth’s, the Nodes relating to the acupuncture points of our own human body.

In Chinese acupuncture, a chart of the life force or chi around the human body depicts twelve lines or meridians in the form of invisible channels under the skin, each paired with another linking the main organs.

The acupuncture points are the Node points of each meridian, considered to be the entrance and exit points for the vital energy surging within our body.

The insertion of a needle into one of these Nodes affects the corresponding part of the body through which the meridian travels; this helps the energy to freely flow throughout the body.

Chi consists of the opposite as well as the complementary forces of yin and yang: yin representing the feminine elements (watery, dark, negative) and yang the masculine elements (airy, light, positive).

If the positive and negative forces are in balance, chi will flow smoothly around the body, whereas imbalance will create sickness and ill health.

This concept also applies to the Earth; its sickness is termed by geomancers as ‘geopathic stress’, which comes from the Greek geo meaning ‘of the earth’ and pathos meaning ‘suffering’ or ‘disease’.

It relates to irregularities in the Earth’s magnetic field, which can be aggravated by a variety of natural and manmade features.

Like the human body, many researchers believe that there are key crossing points of the earth energy meridians at different places around our planet, and that our ancient ancestors marked these Nodes with stone or earth monuments.

Ley Lines — The KEY To Unlocking The Matrix

In the Spring of 1993, author and researcher Gary Biltcliffe began to research the Belinus Line. This is the longest alignment in Britain, and courses from the Isle of Wight to Balnakeil, Scotland (see Figure 4).

He decided to investigate whether similar currents existed at any of the sites on the Belinus Line, and discovered both male and female currents (which he named Belinus and Ellen respectively) that followed the Belinus Line for the whole length of its course.

In their book, The Spine of Albion, Gary Biltcliffe and Caroline Hoare detail their 15-year investigation which included dowsing the male and female currents along the Belinus Line.

The book reveals the sacred places marking the alignment and the path of the currents, and demonstrates how the celestial influences have shaped them today. 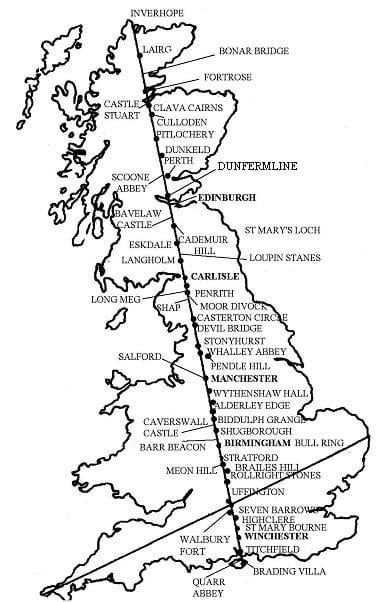 Many of the sites situated on the earth currents of the Belinus Line are interesting; these include earth mounds, halls, temples, churches, chapels, monuments, barrows, wells, stone circles and other standing stones.

In at least one church the pulpit is located on the current of energy. The Shepherd’s Monument in the grounds of Shugborough Hall in Staffordshire is placed on the female current.

This 18th-century monument features a mirror-image carving of Nicolas Poussin’s painting, the Shepherds of Arcadia, and a coded inscription that has never been satisfactorily deciphered.

The reason for the precise angle of the Belinus Line is twofold. It may have been created solely as a geographically central line running from the Isle of Wight at the base of the country (a place the Romans used to survey their invasion of Britain) to correspond with ancient routes and fording places, or alternatively it was laid down to mark a cosmic axis.

Perhaps it is a combination of both, where heaven and earth entangle to create a great corridor of power around the planet.

Looking North from many of the important Node points along the Belinus Line towards the point where it touches the horizon, it is noticed that certain features mark the setting and rising of the stars of the constellation of Cygnus (see Figure 5).

The stars of Cygnus also fall within the ‘Great Rift’ or Dark Rift, a black river that divides the Milky Way along its length from Cygnus to Aquila and then broadening out to Sagittarius, where it obscures the Galactic Centre.

This region of the night sky was considered important to many ancient cultures as a mythological place of heaven or spiritual rebirth. 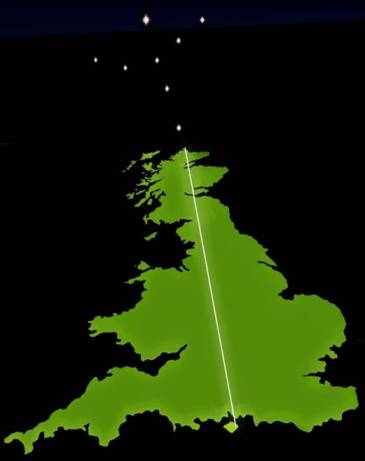 Figure 5: Looking North from many of the important Node points along the Belinus Line towards the point where it touches the horizon, it is noticed that certain features mark the setting and rising of the stars of the constellation of Cygnus.