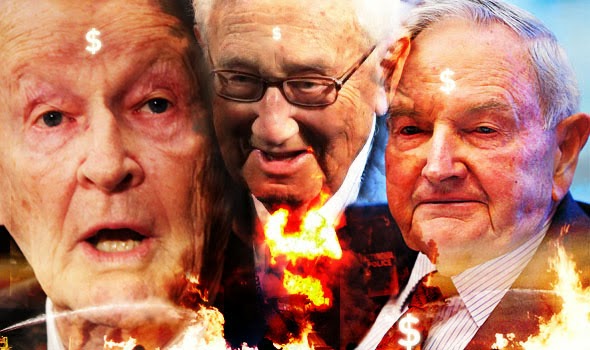 The Trilateral Commission Superseded Control of the U.S. Economy in 1970s

Henry Kissinger once called the Trilateral Commission a ‘government in exile.’ His cooperation with them was inherent in his tight-knit relationship with both Nelson and David Rockefeller.

It was their work on the oil crisis that set up the Trilateral Commission with enough collateral (geopolitical power in the form of the petrodollar) in order to persuade isolationist Japan to coordinate trade with the U.S. and Germany.

Further shocks during the Carter Administration put into place the manipulation of oil prices via OPEC demands, war and conflict, etc.

By forcing debt payment on the petrodollar world currency peg, Wall Street and the American East Coast got a cut of everything that was borrowed or spent. 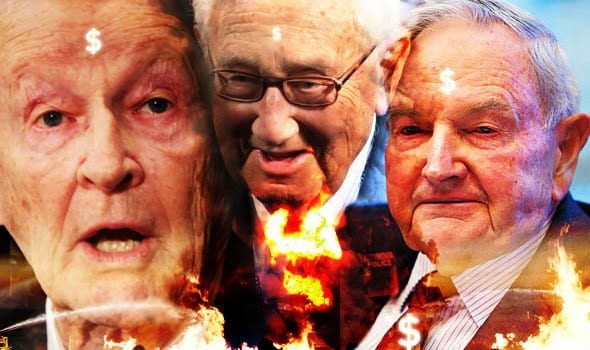 This is a bombshell. It’s a crucial piece of history that has been ignored by mass media. I’ve published this interview before. Here I want to make new comments.

First of all, David Rockefeller’s Trilateral Commission was born in 1973, in part because the Globalist plan to ensure “free trade” (no tariffs paid by predatory mega-corporations) had run into a glitch.

That glitch was President Richard Nixon. He began laying tariffs on certain goods imported into the US, in order to level the playing field and protect American companies.

Nixon, a substantial crook in other respects, went off-script in this case and actually started a movement to reject the Globalist vision.

After Nixon’s ouster from the White House, Gerald Ford became president, and he chose David’s brother, Nelson Rockefeller as his vice-president. It was a sign Globalism and free trade were back on track.

But David Rockefeller and his sidekick, Brzezinski, wanted more. They wanted a man in the White House whom they’d created from scratch.

That man was a peanut farmer no one had ever heard of: Jimmy Carter.

Through their media connections, David and Brzezinski vaulted Carter into the spotlight. He won the Democratic nomination (1976), spread a syrupy message of love and coming together after the Watergate debacle, and soon he was ensconced in the Oval Office.

Flash forward to 1978, the second year of Carter’s presidency. An interview took place.

It’s a close-up snap shot of a remarkable moment. It’s a through-the-looking-glass secret — in the form of a conversation between a reporter, Jeremiah Novak, and two Trilateral Commission members, Karl Kaiser and Richard Cooper.

The interview concerned the issue of who exactly, during President Carter’s administration, was formulating and controlling US economic and political policy.

The careless and off-hand attitude of Trilateralists Kaiser and Cooper is astonishing. It’s as if they’re saying:

“What we’re revealing is already out in the open, it’s too late to do anything about it, why are you so worked up, we’ve already won…”

COOPER: Many people still live in a world of separate nations [!], and they would resent such coordination [of policy].

NOVAK: Yes, but why doesn’t President Carter come out with it and tell the American people that [US] economic and political power is being coordinated by a [Trilateral] committee made up of Henry Owen and six others?

After all, if [US] policy is being made on a multinational level, the people should know.

COOPER: President Carter and Secretary of State Vance have constantly alluded to this in their speeches.

Of course, although Kaiser and Cooper claimed everything being manipulated by the Trilateral Commission committee was already out in the open, it wasn’t.

Their interview slipped under the mainstream media radar, which is to say, it was ignored and buried. It didn’t become a scandal on the level of, say, Watergate, although its essence was far larger than Watergate.

US economic and political policy run by a committee of the Trilateral Commission—the Commission had been created in 1973 as an “informal discussion group” by David Rockefeller and his sidekick, Brzezinski, who would become Jimmy Carter’s National Security Advisor.

Shortly after Carter won the presidential election, his aide, Hamilton Jordan, said that if after the inauguration, Cy Vance and Brzezinski came on board as secretary of state and national security adviser, “We have lost. And I will quit.”

Confessions of a Rockefeller World Order

In the run-up to his inauguration after the 2008 presidential election, Obama was tutored by the co-founder of the Trilateral Commission, Zbigniew Brzezinski.

Four years before birthing the Commission with his boss of bosses, David Rockefeller, Brzezinski wrote:

Brzezinski: ‘It’s Easier to Kill than Control a Million People‘

Any doubt on the question of Trialteral goals is answered by David Rockefeller himself, in his Memoirs (2003):

“Some even believe we are part of a secret cabal working against the best interests of the United States, characterizing my family and me as ‘internationalists’ and of conspiring with others around the world to build a more integrated global political and economic structure — one world, if you will. If that is the charge, I stand guilty, and I am proud of it.”

Patrick Wood, author of Trilaterals Over Washington and Technocracy Rising, points out there are only 87 members of the Trilateral Commission who live in America.

Obama appointed eleven of them to posts in his administration.

Here is the payoff. The US Trade Representative (appointed by Obama in 2013), who was responsible for negotiating the Globalist TPP (Trans-Pacific Partnership) treaty with 11 other nations, was Michael Froman, a former member of the Trilateral Commission.

Don’t let the word “former” fool you. Commission members resign when they take positions in the Executive Branch of government. And when they serve in vital positions, such as US Trade Representative, they aren’t there by accident. They’re operatives with a specific agenda.

Flash forward one more time. Trump, who squashed the Globalist TPP treaty as soon as he was inaugurated, has been busy making staff appointments.

“According to a White House press release, the first member of the Trilateral Commission has entered the Trump administration as the Deputy Assistant to the President for International Economic Affairs, where he will sit on the National Security Council:

“Kenneth I. Juster will serve as Deputy Assistant to the President for International Economic Affairs. He will coordinate the Administration’s international economic policy and integrate it with national security and foreign policy. He will also be the President’s representative and lead U.S. negotiator (“Sherpa”) for the annual G-7, G-20, and APEC Summits.”

Juster’s duties will take him into the heart of high-level negotiations with foreign governments on economic policy.

Keep your eye on Mr. Juster. Will he take actions in line with Trump’s avowed anti-Globalist stance?

Or will Juster work as one more covert Trilateral operative in the center of American decision-making?

If the answer is “covert operative,” does Trump know this? Does he condone what Mr. Juster will do?

Or is this a case of secret infiltration, on behalf the most powerful Globalist group in the world, the Trilateral Commission?

Jon Rappoport is the author of three explosive collections, THE MATRIX REVEALED, EXIT FROM THE MATRIX, and POWER OUTSIDE THE MATRIX, Jon was a candidate for a US Congressional seat in the 29th District of California. He maintains a consulting practice for private clients, the purpose of which is the expansion of personal creative power.

Nominated for a Pulitzer Prize, he has worked as an investigative reporter for 30 years, writing articles on politics, medicine, and health for CBS Healthwatch, LA Weekly, Spin Magazine, Stern, and other newspapers and magazines in the US and Europe.

Review of 200 Studies Confirms That Every Pound Gained Increases Risk of Many Cancers Previous post
Vault 7 Bombshell: The CIA Can Spy Through TVs, iPhones, Smart Phones and Windows PCs Next post