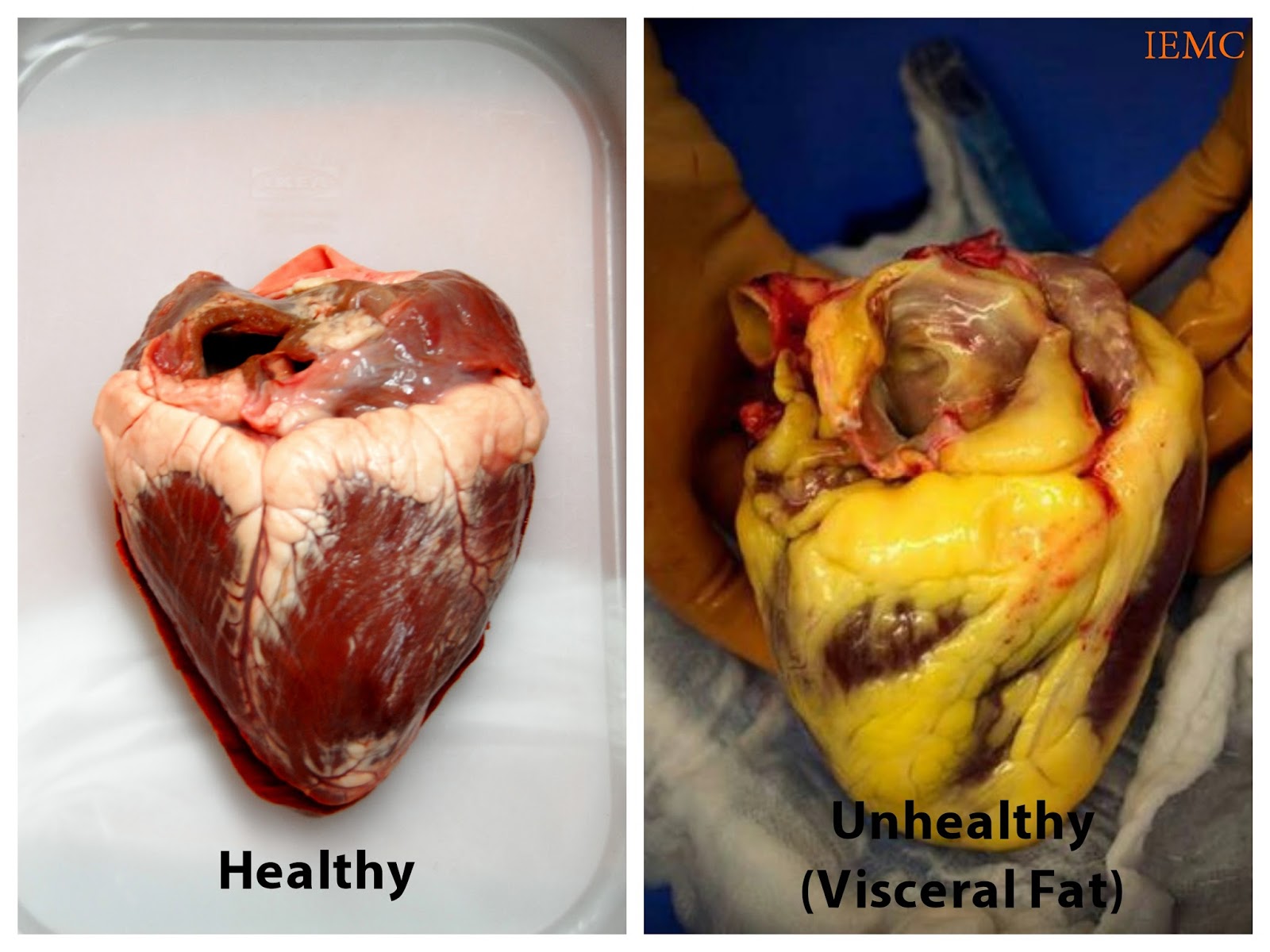 It is also a fat that is highly active and constantly pumping poisons into the bloodstream. The problem is, although it somewhat contributes to belly fat, you can’t really see it.

So how do you get rid of it? 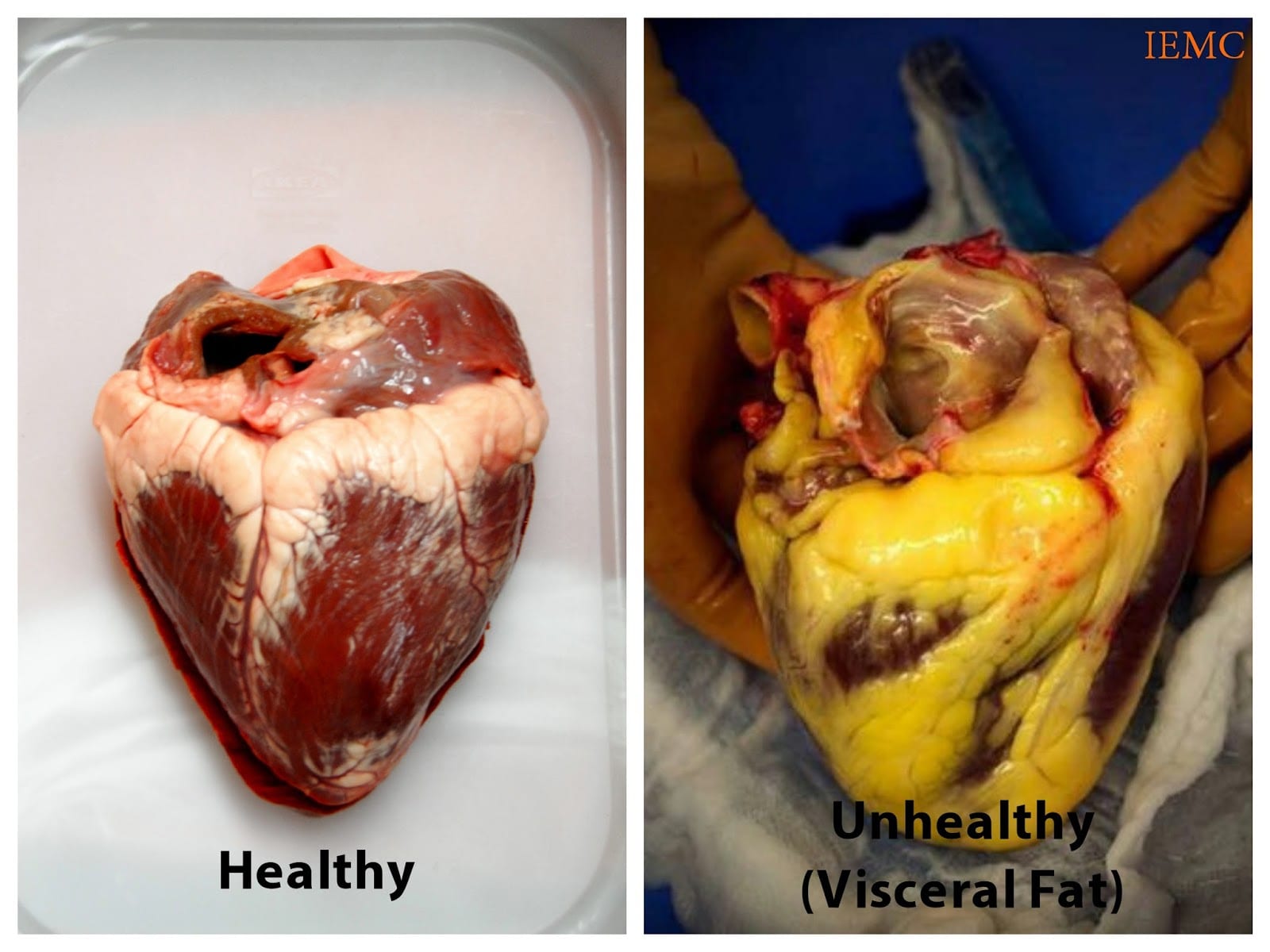 An excess of visceral fat is classically known as central obesity, the “pot belly” or “beer belly” effect, in which the abdomen protrudes excessively. This body type is also known as “apple shaped,” as opposed to “pear shaped,” in which fat is deposited on the hips and buttocks.

Scientists have come to recognize that body fat, instead of body weight, is the key to evaluating obesity. It’s one of the reasons Body Mass Index (BMI) is a very poor indicator of health and Body Composition is far more accurate.

Biomarkers such as waist-hip and waist-to-height ratios are also linked to cardiovascular function, systolic and diastolic blood pressure, HDL and total cholesterol as well as well-being.

Report author Dr Terry Maguire, honorary senior lecturer at Queen’s University in Belfast, said people did not know that visceral fat, which you cannot see or feel and which sits around the organs in the abdomen, is there or that it poses a problem.

It is thought that the danger of visceral fat is related to the release of proteins and hormones that can cause inflammation, which in turn can damage arteries and enter the liver, and affect how the body breaks down sugars and fats.

Visceral fat is medically defined as the internal fatty tissue that wraps itself around the heart, liver, kidneys and pancreas, and streaks through muscles.

Scientists don’t know exactly what causes people to lay down visceral fat, although it has been linked to specific foods.

But they do know it behaves differently from the largely benign fat that lies just below the skin (the sort you can pinch between your fingers).

Visceral fat is known to cause inflammation in the colon and the artery walls, and is a major cause of heart disease, diabetes and some types of cancer.

For the first time, a causal link has been shown in a study published in Cancer Prevention Research which detailed how visceral fat is linked to colon cancer.

“There has been some skepticism as to whether obesity per se is a bona fide cancer risk factor, rather than the habits that fuel it, including a poor diet and a sedentary lifestyle,” said Derek M. Huffman, Ph.D., postdoctoral fellow at the Institute for Aging Research at the Albert Einstein College of Medicine in Bronx, N.Y.

“Although those other lifestyle choices play a role, this study unequivocally demonstrates that visceral adiposity is causally linked to intestinal cancer.”

Prior research has shown that obesity markedly increases the likelihood of being diagnosed with and dying from many cancers.

Huffman and colleagues sought to determine if removing visceral fat in mice genetically prone to developing colon cancer might prevent or lessen the development of these tumors.

“Our sham-operated obese mice had the most visceral fat, developed the greatest number of intestinal tumors, and had the worst overall survival,” Huffman said.

“However, mice that had less visceral fat, either by surgical removal or a calorie-restricted diet, had a reduction in the number of intestinal tumors. This was particularly remarkable in the case of our group where visceral fat was surgically removed, because these mice were still obese, they just had very little abdominal fat.”

What is interesting about the process of weight management; there appears to be a scarcity of information on the differences between subcutaneous fat and visceral fat-and the tenuous relationship with the dieter’s goals.

According to the NIH, visceral fat is composed of several adipose depots which may contribute insulin resistance, glucose intolerance, dyslipidemia, hypertension and coronary artery disease.

Fasting Supercharges Your Brain — Here is How

Besides laziness and lack of activity, choice of foods also plays a role in visceral fat.

Topping the list of culprits are sweetened drinks, fried foods, and any form of potatoes.

The biggest culprit is eating french fries; every extra serving of fries eaten in a day was linked to a gain of more than three pounds, while eating an extra serving of potato chips led to 1.69 pounds. Other diet busters included refined grains (like white rice and white bread).

Some of the worst food offenders (pounds gained for every additional serving per day over four years):

The results show us what everyone knows — eating junk food and starchy foods can be bad news for your waistline and visceral fat — but the data are useful for quantifying just how much that extra bag of chips can hurt you, as well as how making the switch to whole healthy foods can help.

Another study showed that genetically-modified (GM) food is contributing to obesity and visceral fat. Researchers found that GM corn fed to mice led to an increase in overall body weight of almost 4%, while also increasing the weight of their livers by up to 11%.

A study, published in Nature’s journal Obesity, found that for every 10-gram increase in soluble fibre eaten per day, deep belly visceral fat was reduced by 3.7 per cent over five years.

Most soluble fiber is used by the bacteria in the colon to produce short-chain fatty acids which provide energy to the body, approximately 2 Calories (8.5 kilojoules) per gram of soluble fiber.

Becuse these calories do not raise blood sugar, so they don’t count towards the total carbs. They include foods such as psyllium husk, oat bran and apples.

If You Must Exercise For Your Health, Do It For Visceral Fat

Speaking to a meeting of the American College of Sports Medicine in San Francisco, Cris Slentz said he was surprised at how rapidly fat accumulated deep in the abdomens of patients who did not exercise.

Volunteers who did no exercise had an 8.6 percent increase in visceral fat after eight months, while those who exercised the most lost 8.1 percent of their visceral fat, Slentz said.

“The results of our investigation show that in sedentary overweight adults, who continue to choose a sedentary lifestyle, the detrimental effects are worse and more rapid than we previously thought,” Slentz said in a statement.
“We probably should not have been surprised since this simply mirrors the increasingly rapid rise in obesity prevalence seen in the U.S., where at present two out of three adults are overweight or obese.”

Women gained fat twice as quickly as the men did, Slentz said.

Exercise takes the fat away quickly, but it has to be pretty vigorous, Slentz and colleagues found.

Doing bursts of hard exercise not only improves cardiovascular fitness but also the body’s ability to burn visceral fat, even during low- or moderate-intensity workouts, according to a study published in the Journal of Applied Physiology.

Eight women in their early 20s cycled for 10 sets of four minutes of hard riding, followed by two minutes of rest. Over two weeks, they completed seven interval workouts.

After interval training, the amount of fat burned in an hour of continuous moderate cycling increased by 36 percent, said Jason L. Talanian, the lead author of the study and an exercise scientist at the University of Guelph in Ontario.

Cardiovascular fitness — the ability of the heart and lungs to supply oxygen to working muscles — improved by 13 percent. Results were independent from any type of special dieting or food plans.

It didn’t matter how fit the subjects were before. Borderline sedentary subjects and the college athletes had similar increases in fitness and fat burning.

“Even when interval training was added on top of other exercise they were doing, they still saw a significant improvement,” Mr. Talanian said.

You can choose any form of exercise you like. It can be calisthenics or as simple as walking. The key is to start where you’re comfortable and build from there. Here’s a routine you can try at home:

Although dietary choices influence visceral fat, researchers have found that vigorous exercise is one of the most effective ways to reduce it.

Gender differences do exist for visceral fat and it’s important that scientists begin to recognize this significant finding.

“…there are important gender differences in how adiposity and nutrients interact with the tumor environment.”

He noted that more studies are needed to definitively uncover the mechanisms behind the causality between visceral fat and cancer, to determine how abdominal obesity and nutrient availability act independently during the stages of tumor promotion and progression, and to determine how other strategies to promote weight loss affect cancer risk.

Mortality and financial trends associated with cancer and heart disease seems to suggest that future efforts should increase social marketing awareness of visceral fat and the associated effects in men and women.

Which matters the most in the battle of the bulge? Certainly not subcutaneous fat.

John Summerly is nutritionist, herbologist, and homeopathic practitioner. He is a leader in the natural health community and consults athletes, executives and most of all parents of children on the benefits of complementary therapies for health and prevention.