How can a small number of individuals making up society’s upper echelons arrogantly considering themselves to be intellectually superior to everybody else ruthlessly achieve world domination?

The way in which these individuals making up society’s upper echelons control the world couldn’t be better explained than by referring to the “9 strategies for a New World Order” taken from Wells’ book.

The 9 strategies required for NWO implementation are now being applied at a furious pace. So it’s worth examining them to see how they work in the modern-day context and what can be gleaned.

“The new order cannot be brought into existence without a gigantic and more or less co-ordinated effort of the saner and abler elements in the human population.”

We know that the world leaders, comprising businessmen, religious and political leaders continue their co-ordinated efforts to implement the NWO through ownership and control, with the goal of achieving world domination: One central bank, one global currency, one religion,one government, one leader, in a militarized police state…

In their quest, thirsts for wealth, power and world domination, these individuals consider that they know what’s best for society.

Their arrogance is beyond words: They will disregard alternative viewpoints, contradictory truths; ignore humanitarian suffering as a consequence of their quest for the NWO. 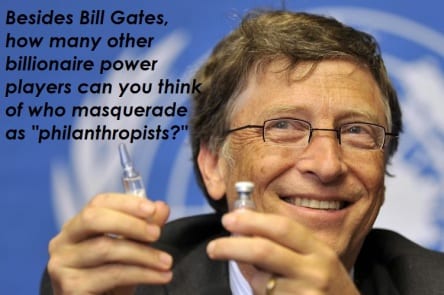 And this modernized excess population has no longer any social humility.”

In other words, you are the ‘excess population’ lacking in intelligence and the ability to lead. But overpopulation is a myth. Overpopulation only occurs in confined areas like cities.

However, the ‘excess overpopulation’ is still regarded by the leaders as a negative by-product. No wonder they want world depopulation.

“…we should still be confronted with the essential riddle, which is the abolition of the boundaries of most existing sovereign states and their merge in some larger Pax. We have to do that if any supportable human life is the flourish.”

The current gratuitous open border policies in Western-World countries such as those in the USA, Sweden and Germany are no mistake. It’s not about human rights. It’s really about deconstructing sovereign states, as part of the planned NWO agenda.

“But many of us are coming to realize that existing governments have to go into the melting pot, we believe that it is a world revolution which is upon us, and that in the great struggle to evoke Westernised world socialism.”

Remember, the NWO modus operandi is “order out of chaos.” No wonder we have so many countries and their respective governments breaking down. Wars, civil unrest, military coups, financial crashes… — All done by design to collapse the old order and then achieve the NWO.

“The new power organizations are destroying the forests of the world at headlong speed, ploughing great grazing areas into deserts, exhausting mineral resources, killing off whales, seals and a multitude of rare and beautiful species, destroying the moral of every social type and devastating the planet .”

Consistent with today’s sentiment from the upper echelons of society heading the NWO, Wells remarks that the expanding populations are damaging the planet and that preventative action must be taken.

In their response, they have taken measures to protect the planet, as in the case of the recent Paris cop21 conference climate change agreement…  The climate change agenda is something they want the people to accept, regardless of its hidden ulterior motives, profiteering and flawed science…

“Political federation, we have to realize without a concurrent economic collectivisation, is bound to fail… so it is plain that the Federal Union a common money means an identical economic life throughout the Union.”

Thus, it’s inevitable that there will be a major world financial collapse to bring in the one world currency, so be prepared, as it could happen ANY TIME NOW.

“The distribution of this essential conception one may call propaganda, but in reality it is education. The opening phase of this new type of Revolution must involve therefore a campaign for re-invigorated and modernised education throughout the world…”

Hence, the indoctrination we are seeing in the current education system [i.e. indoctrination] throughout schools and colleges, needed to shape young people into having the NWO mindset.

“World peace means all that revolution. More and more of us begin to realize that it cannot mean less.

The reorganization of the world has to be mainly the work of a ‘movement’ or a party or a religion or a cult, whatever we chose to call it… it will not be a close-knit organization, toeing the party line and so forth.

It may be a loose-knit and many faceted, but if a sufficient number of minds throughout the world, irrespective of race, origin or economic and social habituations…”

Does this sound familiar to you? Yes, Wells is referring to the secretly manufactured worldwide rise in populism. You have the masses in their respective movements; the left paradigm against the right, willing to fight each other for a revolution…

9. Shock troops of the NWO

“The eager and adventurous unemployed young are indeed the shock troops in the destruction of the old social order everywhere. They find guidance in some confident Party or some inspired Champion, who organises them for revolutionary or counter-revolutionary ends. It scarcely matters which… The essence is the combination of energy, frustration and discontent. ”

In other words, as a means to an end, the ruling elite secretly manufacture circumstances to get the common people to fight each other.

Left or right, political, economic or social issues… it doesn’t matter, as long as the people are fighting each other then the ruling elite have got them where they want them, ruled and divided.

Wells’ 9 strategies for a New World Order have served as a blueprint. Still being applied in principle, they can be used to sum up what’s going on in the world today. Are the concerted efforts made by the ruling elite and associates to achieve the NWO coming to a climax?

In retrospect of this, remember, ignorance is only an option: Educate yourself and get active. Protection from the NWO is strongly advised.

The More Muscle, The Less Diabetes — And That's Why Being Active Is So Important Previous post
Fukushima – The Untouchable Eco-Apocalypse No One is Talking About Next post